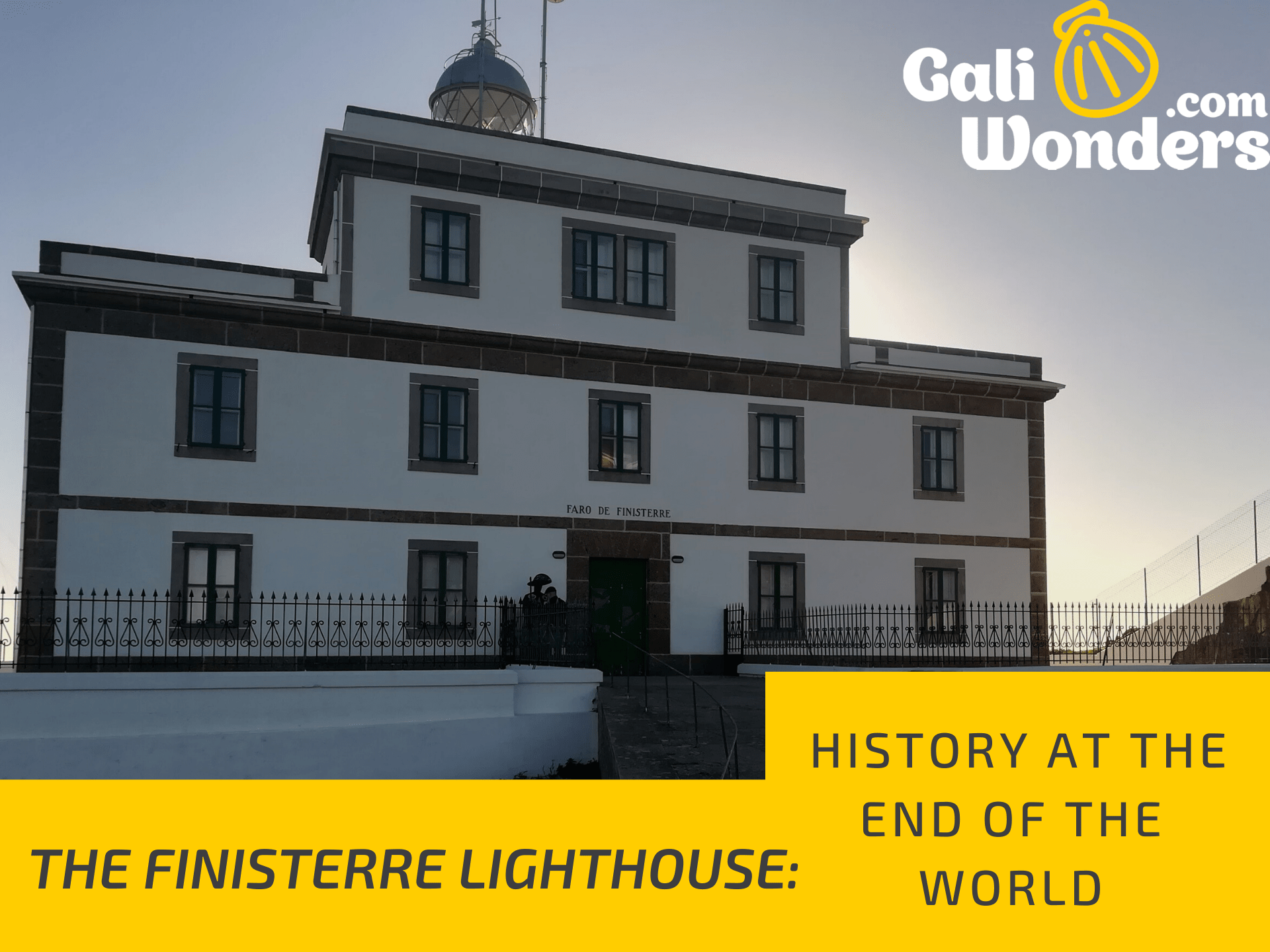 Placed in an occidental spot of Europe, the Finisterre Lighthouse is one of the most visited of the world and a refference point for boats and pilgrims. Many of those who walk to Santiago de Compostela decide to continue a bit further in order to know what the Romans called “the end of the World”.

Where is the Finisterre Lighthouse?

This “lantern” is the most famous place of Fisterra, a small  county of around 4,700 inhabitants. Concretely, the Finisterre Lighthouse (officially and in Galician language, Fisterra Lighthouse) is built on the Cape with the same name, called like that because Romans believed that it was the most occidental point of Europe (finis terrae). As time goes by it was discovered that this was a wrong evaluation, but this didn’t damage the charm of the area. 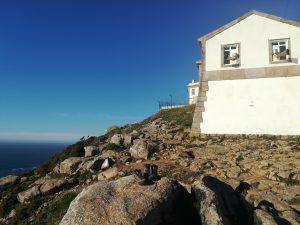 This municipality is part of A Costa da Morte, known like this because of the big amount of wrecks that happened on its littoral. Nevertheless, it exists a legend that claims that this name came from the Celtic people that lived in Galicia. This myth says that after doing the Camino de las Estrellas (Star’s Walk, Camino de Santiago), the Celtic pilgrims stopped to rest at this location in Fisterra Cape to observe how the day died.

Nowadays, there are a lot of pilgrims that continue their way from Santiago to Fisterra and, sometimes, also to Muxía. Just next to the Finisterre Lighthouse, in the same place Romans and Celtics believed the last populated spot of the Earth, the walkers can relax looking at the ocean. A lot of them used to burn their belongings here in order to purify themselves and leave behind anything they don’t want to carry anymore. Nevertheless, the authorities prohibited this after there were some small fires and because the landscape was being damaged with this kind of acts. 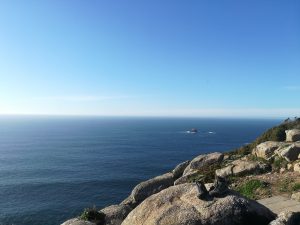 Symbolically because of the Camino, a pair of boots were placed in this spot. Now it is possible to see only one, because the other was stolen.

What is the history of the Finisterre Lighthouse?

The Finisterre Lighthouse was built in 1853 to guide the boats that passed through this historically dangerous coast. Before existing, a lot of ships were wrecked in this area of A Costa da Morte. Among them, 25 vessels that were part of the Second Invincible Navy of Felipe the Second went to the bottom of the sea.

Placed even in a higher point than the lighthouse, that has 17 meters altitude, there is the traffic light. This structure was created in 1879 with the purpose of sending signals to the war marine. At the present, this is not its function anymore. After some years when the deterioration of the building was increasing, Jesús Picallo took it. With César Portela as the architect, they renovated this space and they made a rural hotel with very good reviews. The rooms of the O Semáforo de Finisterre have names as “stellae” or “of the shipwrecheds”, in a clear tribute to the history of the edification.

This area is kind of dangerous because of the fog, that made more difficult that the light of the lighthouse could be seen from far away. For this reason, in 1889 a siren that alerted the vessels about the risks to get close to the coast was included to the complex. This construction, called the Vaca de Fisterra (Fisterra’s cow), existed thanks to Ángel García del Hoyo.  It can send out two strident noises every minute to a distance of 25 miles (around 46 km) in a medium time. Nowadays, Fisterra’s Cow is not working.

The architecture of the Finisterre Lighthouse 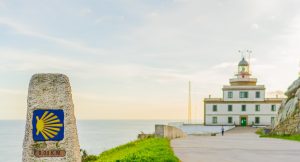 The Finisterre Lighthouse has category of first-class lighthouse and it was created by the engineer Félix Uhagón. Its tower is octagonal and it is made out of pieces of masonry. This structure is 17 meters high and it has a lantern situated on the dome, that is 138 meters high over the level of the sea. The light can reach almost 31 miles, that are around 57 km. When it was built, it was working with oil lamps. After some reformations, this system was replaced by the incandescence lamps, that can emit a blink every five seconds.

To this Finisterre Lighthouse were added with the time the traffic light and the siren. The three elements together are what the travelers identify with Fisterra. If you go around this structure, you can sit on the rokcs and observe the sunset or just relax with the sound of the ocean.

Those pilgrims who arrive in Santiago de Compostela and decide to continue their way, can do it until Fisterra or Muxía. The Finisterre Way is 86 km long that can be done in four walking days. The first stage, 21 km far away from Santiago, is in Negreira and it isn’t considered difficult. This is an advantage because the next journey the distance increase until the 32 km from Negreira to Olveiroa. The first day goes through eucalyptus and pine forests and also through small villages, while the second one you will pass through a mountainous area. 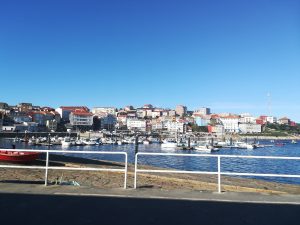 On the third day and 18 km far away from Olveiroa we find the sailor’s village of Cee. The last journey is the shortest, only 15 km. It comes with amazing views of the cliffs of this coast until reaching Cabo Finisterre. The pilgrims that arrive here can get an official document called Fisterrana that proves that they did the Camino de Finisterre. But be careful! You should put at least two stamps per day in your Pilgrim’s Passport since you leave Santiago to have it.

The legend says that the Virgin arrived to Muxía in a boat made out of stone to cheer up the Apostol. Nowadays, this is the other destination pilgrims chose as their end of the way. Once you are in Fisterra, you should walk 28 km more to reach Muxía and get your Muxiana, a similar document to the Compostela and the Fisterrana. From Finisterre to Lires there are only 13 km through small villages. Lastly, during the 15 km that go to Muxía you will walk on the Mount Facho. In total, 114 km in six journeys are enough to walk the Finisterre and Muxia Way while enjoying the unknown and spectacular landscapes of A Costa da Morte.

Fisterre Cape is not only the end of the Camino for those who arrive in Santiago de Compostela but also for those who walk the Camiño dos Faros (Lighthouses Way). This hiking route is spectacular and it goes next to the coast from Malpica to Finisterre. This path can be done in eight stages and it passes near the most emblematic lighthouses of A Costa da Morte, before reaching Finisterre. 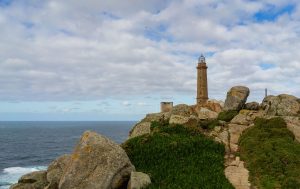 Furthermore, this way allows the walkers to enjoy the little villages typical from the Galician coast, the calm beaches and the spectacular cliffs. This route is still not very popular among pilgrims. As such, walking it doesn’t mean to go in the middle of the crowd. Nevertheless, it is convenient to pay attention because it has some difficulties, and the terrain is a bit irregular. It is recommended to take the most comfortable clothes and shoes and stop to rest in some of the local bars and restaurants along the way,, if it is necessary.

What can you do around Finisterre?

A Costa da Morte is a very charm area and it can be enjoyed without being exposed to the big amount of tourists, typical in another places. However, if you are looking to enjoy the solitude, we recommend to avoid summer months to do so.

Less than 30 km far away from Fisterra it is located Muxía, the other reference spot for pilgrims in A Costa da Morte. It was here where the Virgin arrived in a stone-made boat to give encouragement to St James the Apostle during his trip. According to the legend, the remains of the ship are still in the area and are distributed in the Pedra de Abalar (Movement’s Stone), the Pedra dos Cadrís (Hit’s Stone), the Pedra dos Namorados (Lover’s Stone) and the Pedra do Temón (Rudder’s Stone). Precisely at this point it was built the Santuario da Virxe da Barca, that receives every year thousand of devotees. In the Christmas day of 2013, a lightning hit the building and caused a fire that destroyed the frontal retablo and the roof. After its remodelling in 2015, the temple recovered the appearance and the visits increased.

More or less at the same distance but in the south of the Finisterre Lighthouse there is the only waterfall in Europe that flows into the see, the Fervenza do Ézaro (Ézaro waterfall). Placed in the council of Dumbría, this phenomenon is worth the visit. In addition, some days of the year there is a light spectacle on the waterfall that visitors really enjoy.

Most importantly, these two visits and the one to the Finisterre Lighthouse are included in one of the day trips that Galiwonders organizes. If you want to know more about it, don’t hesitate to contact us!

To integrate in the area

If you don’t have time to go to Muxía and Dumbría but you want to discover Finisterre, we advise you to visit the village and go close to the fish market so you can see how the auction system works. The building has two floors and the one on the top makes possible a complete vision of what happen on the one below.  Even if a modern system throw a mobile application was installed, there is still the possibility to see the auction in the traditional way: at the top of their lounges. 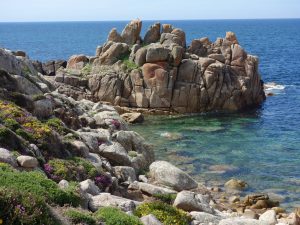 A coastal area so characteristic as A Costa da Morte has numerous beaches where to go to swim. But be careful! The water at the Atlantic Ocean is very cold. If you don’t dare to go inside the water, we recommend you to go anyway and walk on the sand of some of the most popular beaches: Langosteira and Mar de Fora, even if with this one you should be careful because it is as dangerous as beautiful.

After that, you can find a terrace to sit and drink something while enjoying the Galician gastronomy in Fisterra, Muxía, Dumbría or any other place of A Costa da Morte. The daily menus are often a good option and they usually offer dishes that include a vegetarian option. To sum up: don’t loose the opportunity to taste Galicia through its pulpo á feira, the empanada or the caldo.