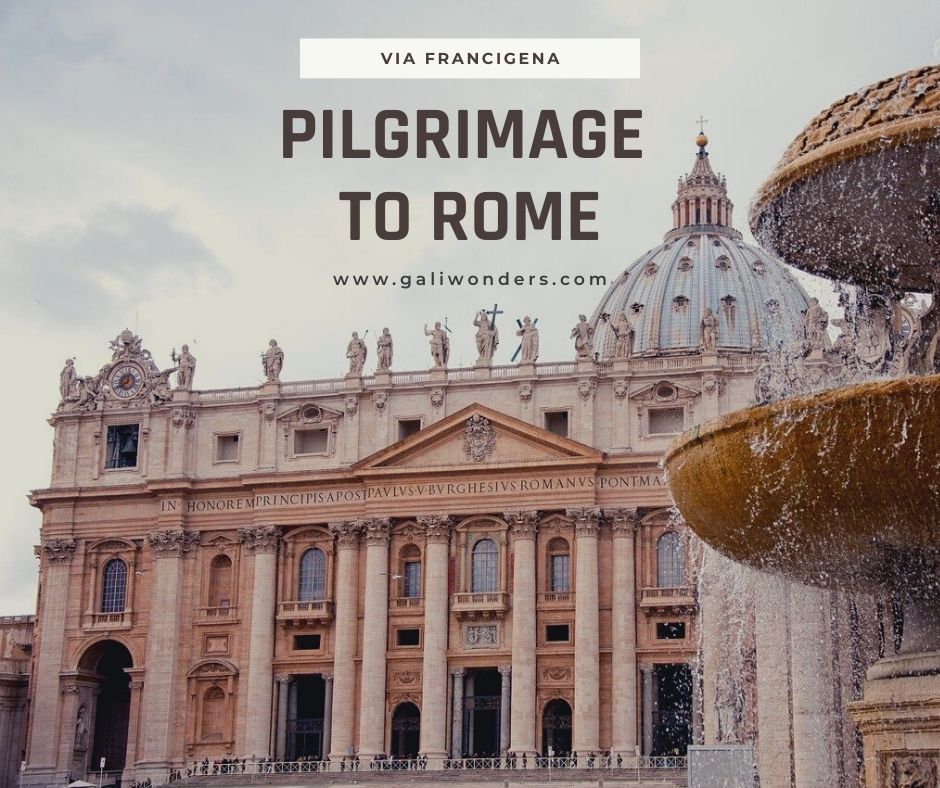 The Via Francigena has become one of the most popular itineraries among pilgrims in Europe. Today we will tell you about one of the most beautiful routes we can travel in Italy. Declared European Cultural Itinerary will not disappoint you if you are looking for beautiful landscapes through the less crowded places of the “Bel Paese”. We discover more about this route, the distances and the maps of each section of the Via Francigena.

The Via Francigena: the pilgrimage to Rome

The Via Francigena is an itinerary that starts in Canterbury and finishes in Rome, covering more than 2000 kilometers. It crosses four countries (England, France, Switzerland and Italy) and Italy is the country that presents more stages and more kilometers as we will see below. Like the Camino de Santiago, this was a very important pilgrimage route, especially in the medieval period, when Jerusalem became too dangerous a religious destination.

What are the stages, the distances and the maps along the Francigena walk?

To summarize, the total distance of the Via Francigena (from Canterbury to Rome) reaches 2040 km. It can be divided into 86 stages that would take 3 months to complete.

The first stage is in England, 32 km from Canterbury to Dover.

In France the Via Francigena starts in Calais and ends in Sainte-Croix for a total of 785 Km that will require 30 days to walk.

In Switzerland, the Francigena route goes from Sainte-Croix until Gran San Bernardo. It’s 11 stages long, and covers a total distance of 214 kms. 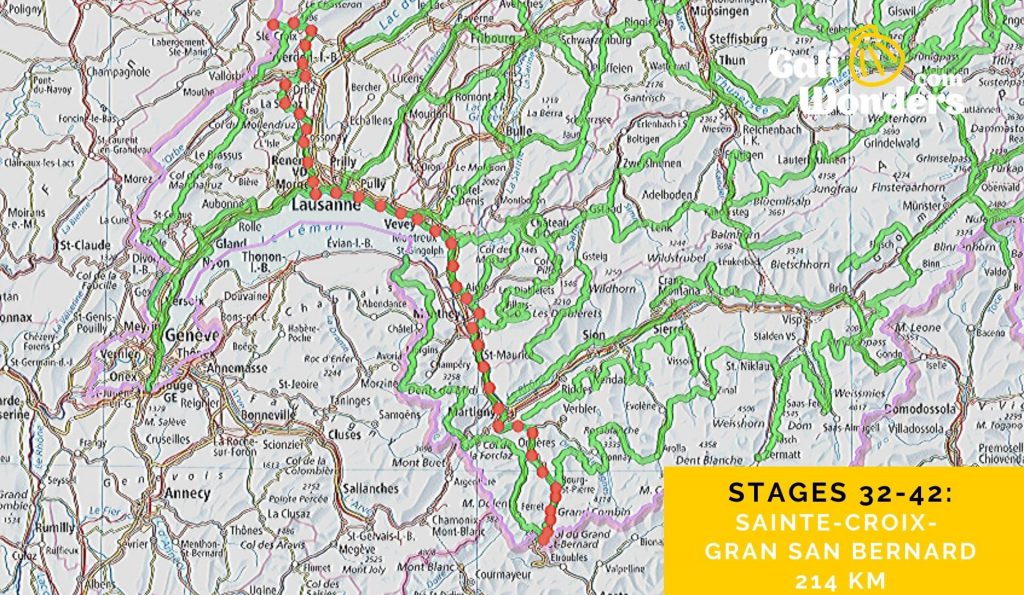 The Italian part of the Via Francigena is the longest one. It starts in the Gran San Bernardo and ends in Rome, the final destination of the Francigena Camino. It is 1014 kms long, and you need 44 stages to walk it. 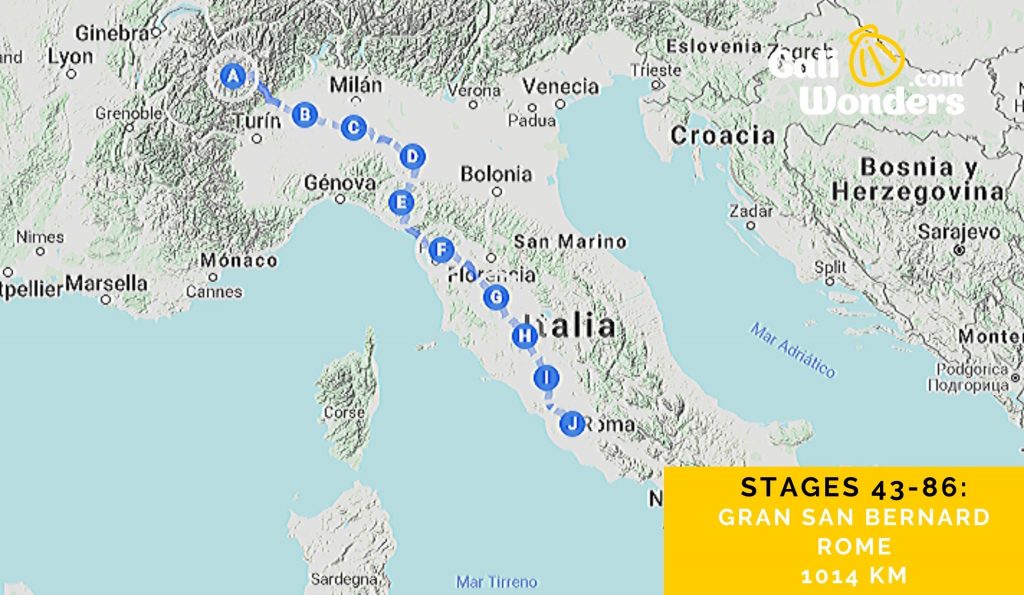 What are the most popular routes of the Via Francigena?

At Galiwonders we have elaborated two offers along the Via Francigena, one in the Tuscany region from Lucca – Siena and the other in the Lacio region, from Viterbo to Rome.

Lets’ find out what amazing sites you will find along this routes, so to help you decide what is the perfect route on the Francigena for you.

Cross Tuscany on the Via Francigena

Tuscany is a mythical land for its art, culture, history, its wonderful people, food and wine products. Without any doubt it deserves to be represented in so many movies from all over the world. 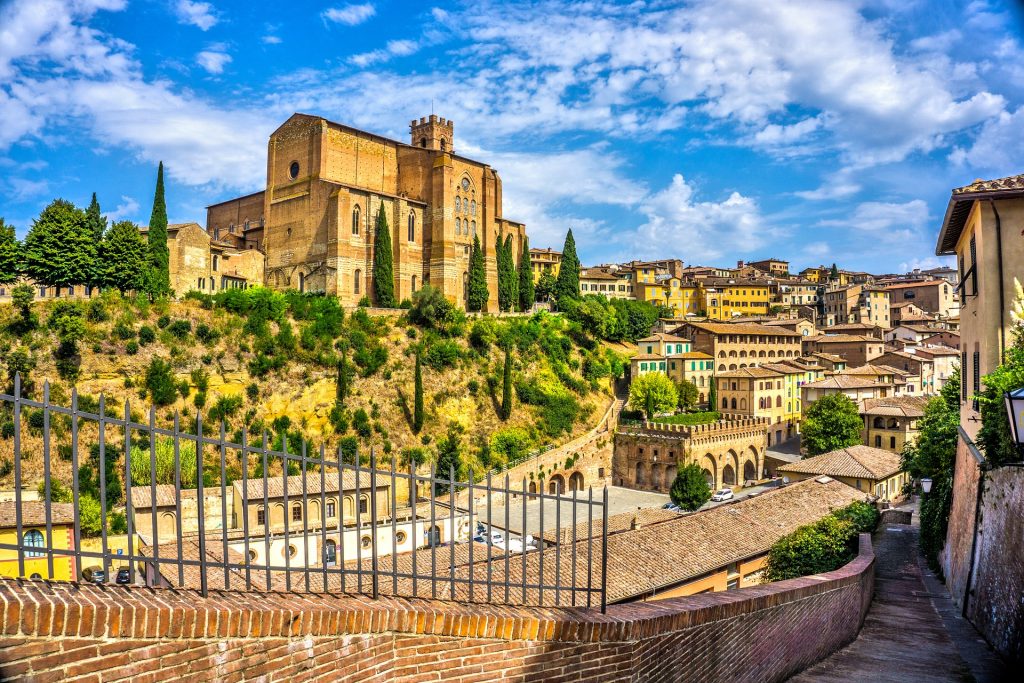 Tuscany is the emblem of Rinascimento, the artistic and cultural movement that has developed throughout Europe. Here is where the Italian language and the famous character of Pinocchio were born.

Can you believe it?

In Tuscany alone there are more UNESCO sites than in the whole Australia or South Africa.

Our offer in Tuscany will take you from Lucca to Siena, in a route of eight days and seven nights. However, the stages can be divided and this itinerary could be walked in more days, through the easy route along the Francigena itinerary.

The routes of the Via Francigena in Tuscany

This city deserves a whole day to visit it. To begin with its streets, its wall and its beautiful historical center.

St. Martin’s Cathedral and the Guinigi Tower built in 1390 offer an example of Lucca’s splendor. Its elliptical Market Square was built over the ancient Roman Amphitheatre and today there are shops and bars where you can relax before starting your journey.

This town, on the top of a hill, is where Etruscans settled down before the Romans. Gambassi Terme offers not only a unique medieval heritage and wonderful views, but also thermal springs. Definitely, a pleasant surprise for the pilgrims on the Way.

Together with Siena, San Gimignano is a World Heritage Site by UNESCO. 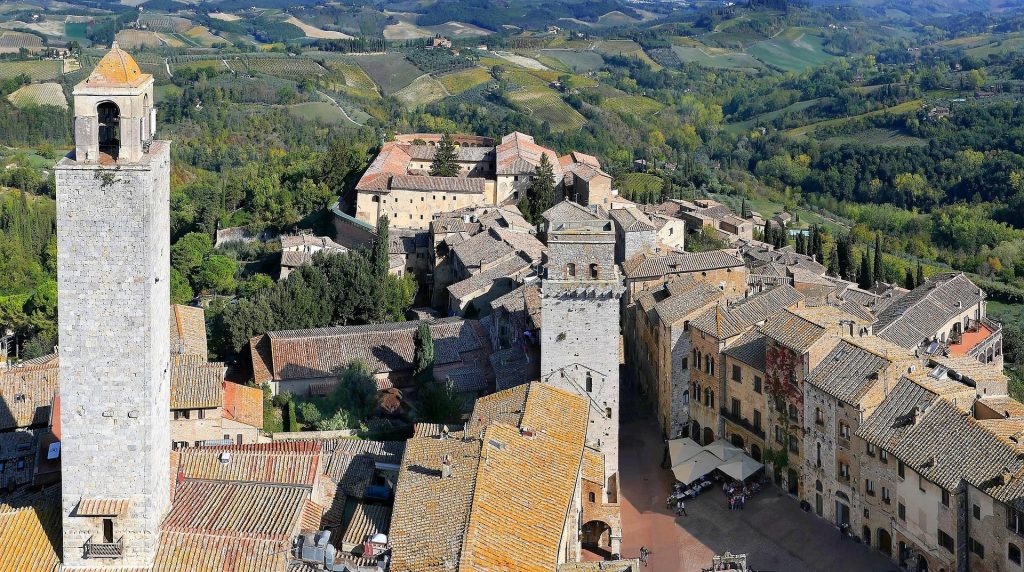 Both of them offer a unique opportunity to relive their medieval past. Here, time hasn’t passed and  you will be able to enjoy a magical atmosphere in nowadays comfort.

San Gimignano is also known to be the “Middle Ages’ Manhattan” for its towers, symbol of the most powerful families of that time.

Its walls, perfectly conserved, were mentioned in the Divine Comedy (Divina Commedia) of Dante Alighieri, in the Inferno (Hell) XXXI. With no doubt, a charming stage along the Via Francigena.

Next, we will discover Lazio! Even though this is a region that many know only for its Eternal City, there is much more than that. For the most part, this region has protected natural areas of great value and areas of archaeological interest unique in the world.

Originally, this region was inhabited by many populations such as the Etruscans, the Faliscans, the Sabinis and the Latins. Afterwards it became the cradle of the Roman Empire as we all know. So much history and culture will be just in your grasp. Don’t miss it!

Furthermore, on your way you will have the opportunity to discover incredible places. In your route you will visit towns such as Viterbo, called the Papal City, the Roman Amphitheater and the Urban Necropolis of Sutri.

Our offer in Lazio will take you from Viterbo to Rome, on a route of seven days and six nights. However, you could choose an easier route to reach Rome.

The Via Francigena’s routes in Lazio

Founded by the Etruscans, it was the site of the first and longest Papal Conclave in 1271. Besides the Papal Palace, its Cathedral, built on an ancient temple in honor to Hercules, are certainly worth a visit. This city has also local dishes such as acquacotta, giubba e calzoni and fish from the nearby lakes.

Legend tells that Hercules, challenged by the Etruscans, stabbed a spear into the ground to demonstrate his strength. From this hole would have come nothing less than the thermal water of the Viterbo thermal baths.

Of really ancient origins, this town had a great importance already in the Etruscan times and its most important building is the San Francis’ church, built in IX century.

This city is undoubtedly a historical wonder defined by its volcanic rock, the tufa. Here you will find a Roman Amphitheater of the II- I century that could contain more than 9000 people. For its structure, almost entirely dug into the rock, came back to light only in 1936. Until then, in fact it was still almost entirely buried. In addition to its famous amphitheater, other sites were dug into the rock, such as the Necropolis Etrusca and the Mitreo.

Rome can’t be narrated, you have to live it.

In conclusion you will arrive at St. Peter’s Square in the Vatican. Surely this will be a very exciting moment and everyone will live in a different way. 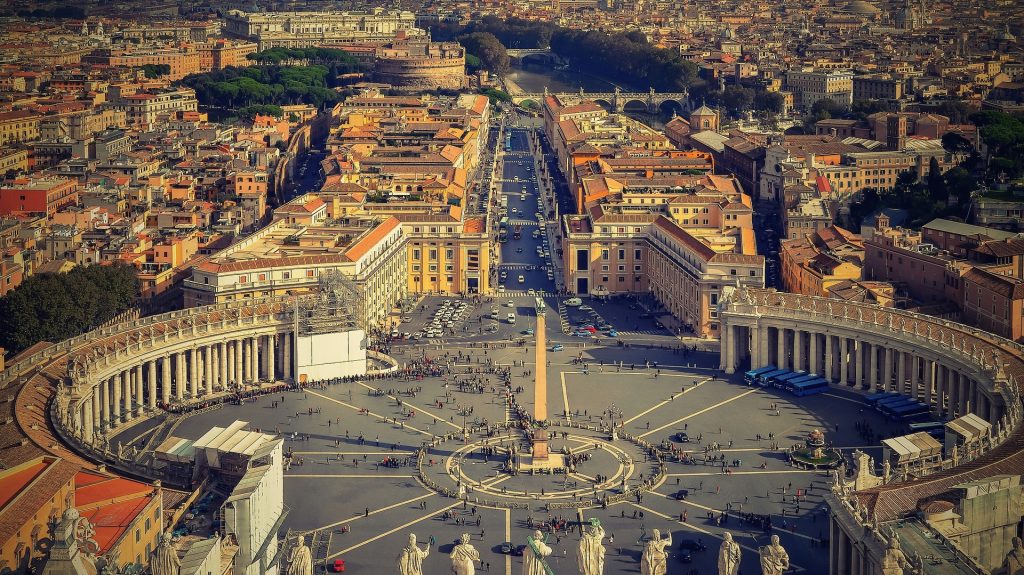 Rome can’t be explained because is a place whose past is still in its streets, in its buildings and in its people.

Pilgrims who come to Rome, feel like they have achieved something that can’t be defined by words.

Is there any accreditation?

Similarly to the Compostela, the “Testimonium”, certifies the arrival to Rome following the routes along the Via Francigena. You can receive it only fulfilling a minimum of 100km on foot or 200 km by bicycle. 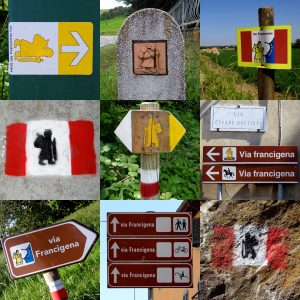 The Stages and Signposting

You can travel the stages by bike or on foot, with a daily average of about 20 kilometers. The signs on the routes of the Via Francigena are not as good as those of the St. James’s Walk.  Therefore, you could find up to five different signs so please pay attention along the way.

Moreover, if you are interested in finding the differences between the Via Francigena and the St James’ Way click here.

Why should I choose to walk a route of the Via Francigena?

In the first place, this experience will allow you to meet wonderful people from all over the world. Thereby, you will enjoy incredible landscapes of Tuscany or Lazio outside of the most crowded tourist destinations.

Walking the Via Francigena, you will be able to discover the charm of the “Bel Paese” at your own rhythm,  in full immersion within the nature and the local culture.

Certainly, its practice goes beyond the simple physical exercise. 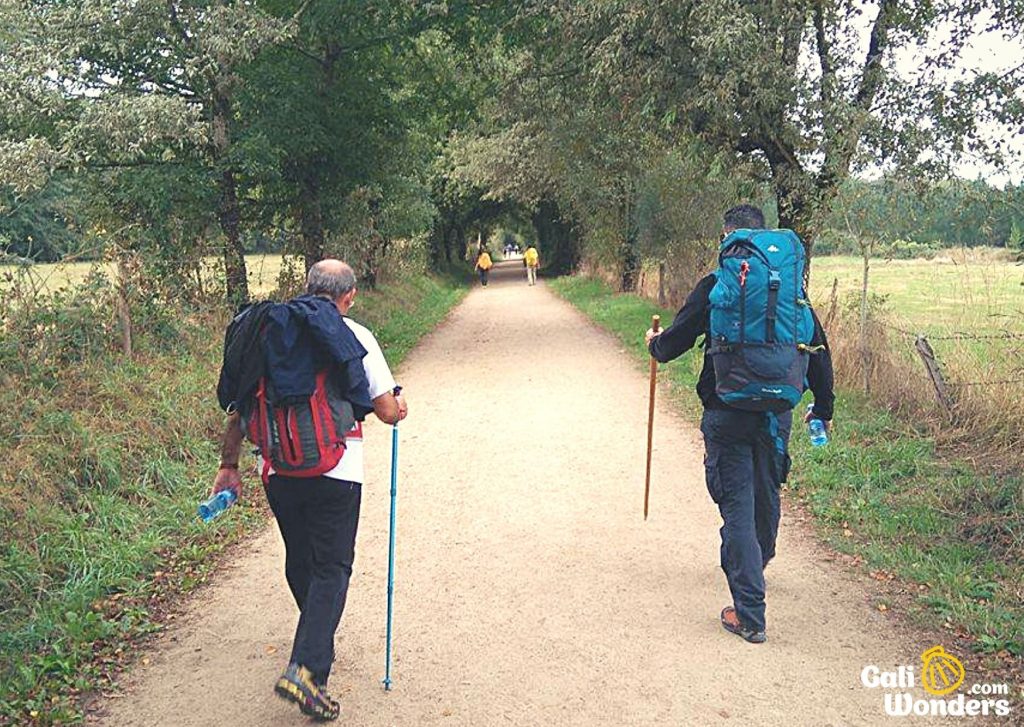 There are many reasons why people choose to walk. For instance, we can see benefits in our minds, as an example in our ability to generate new ideas.

Some of the greatest thinkers in history said exactly the same thing.  Nietzsche, Kant and Rousseau supported the walking practice. According to these great philosophers, walking had a positive influence on their creativity and the elaboration of great thoughts.

At Galiwonders we couldn’t agree more and for this reason, in addition to the Camino de Santiago, we decided to offer new routes along the Via Francigena. We organize tailor made itineraries, luggage transfers between the stages and the best accommodation along the Francigena walk.

Don’t miss this chance to live your Italian dream and contact us for more information!