Today we will talk about the Way of Uclés, a pilgrimage route that has a close relationship with the Way of Santiago, although it does not form part of the network of Jacobin Ways, because it does not end in Santiago de Compostela. This route, which begins in Madrid, has a fascinating story that we want to tell you and that we are sure will arouse your interest.

Let’s find out more about the history around this pilgrimage that ends in the Monastery of Uclés, in the province of Cuenca, the second most important monument dedicated to the Apostle Santiago in Spain, after of course, the Cathedral of Santiago.

The origins of the Monastery of Uclés

The Monastery of the Order of Santiago, is located in a privileged position, on a hill between Cuenca and Madrid. Surrounded by the remains of the walls and towers of the village of Uclés, of Celtic-Iberian and Roman origin, it received the name “El Escorial de La Mancha” for its great monumental value.

This monument, still in perfect state of preservation, is now used as a setting for cultural events, shows and exhibitions. In short, it is more alive than ever!

It was the Muslim domination of the Iberian territory that gave rise to the fortifications, of which the Monastery was part. After the reconquest of the Christians, this monument was donated by King Alfonso VIII in 1174 to the Order of Santiago. Created to ensure the protection of pilgrims on the Pilgrim’s Way to Santiago and to fight against Muslims, the monastery became the main center of the Order. With the passing of the years, in order to offer sufficient space to all its members, new parts were added to the construction, increasing its size.

Eliminated the Muslim danger, a structural redesign of the fortification of Uclés began. The walls were the only defensive element that remained intact, as can still be seen today. 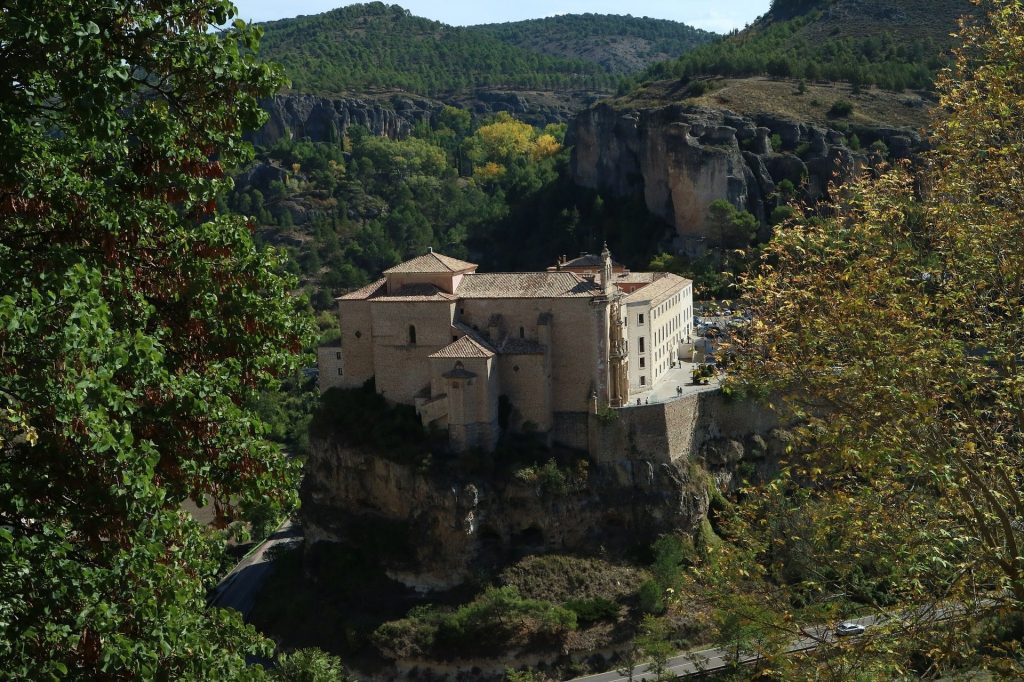 The present appearance of the monastery is due to the work undertaken in 1529, under the reign of Carlos I.

More recent history of the Monastery of Uclés

Unfortunately, the monastery suffered a first sacking in 1809 when the Battle of Uclés took place, after the invasion of Napoleon’s troops. The damages were important and the Order of Santiago lost its property on the building in 1874. Initially under the control of the Bishop of Cuenca, it will pass in the following centuries to be used for different purposes: Jesuit convent, seat of a college and novitiate for the Augustinians.

A new attack on the monument was launched in 1936, at the outbreak of the Spanish Civil War. The students were expelled and the building again looted and deteriorated. This became initially a hospital and later a prison.

After a renovation, it began to be used as a Minor Seminary of the Bishopric of Cuenca, in 1949-1950. Thousands of pupils passed through its classrooms and it is considered a place of extraordinary importance for the Diocese of Cuenca. 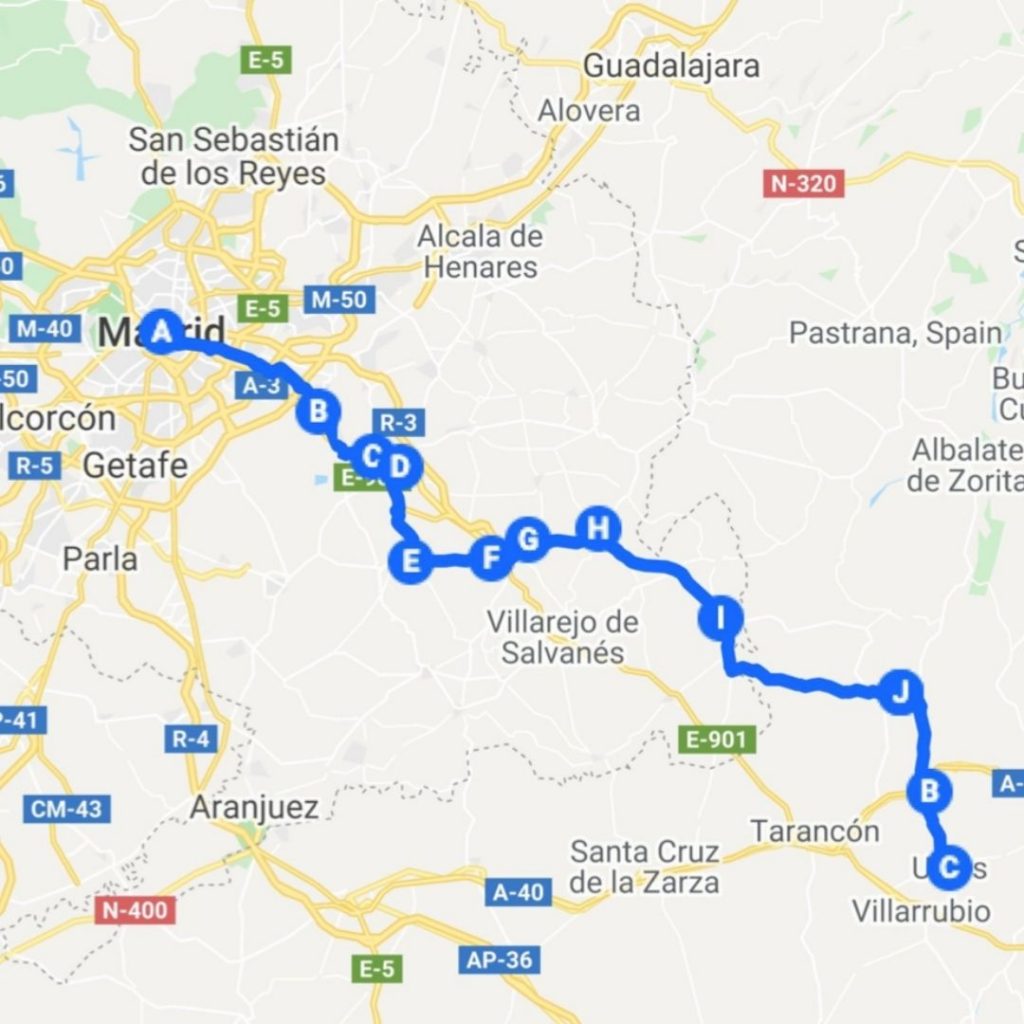 The Way of Uclés

Thanks to Manuel Rossi, who rediscovered this route, abandoned for decades, with the help of the priest Julián de Cuenca in 2010, this route made its reappearance among the pilgrimage routes of the Iberian Peninsula and was officially recovered in 2011. Rossi’s involvement was such that he created the signs of the path, the red arrows with the cross of Santiago, symbol of the Order of Santiago.

The 145 km route is divided into 11 stages. However, being much shorter than the average of the stages of the Route of Santiago (10km per day compared to the 25km of the Route), some of them can be joined and covered in the same day (an average of 6 days is enough to complete the route). In addition, the type of terrain that is covered for most of the route makes this pilgrimage suitable for both bicycle and wheelchair pilgrims.

We can see the different stages of the route. 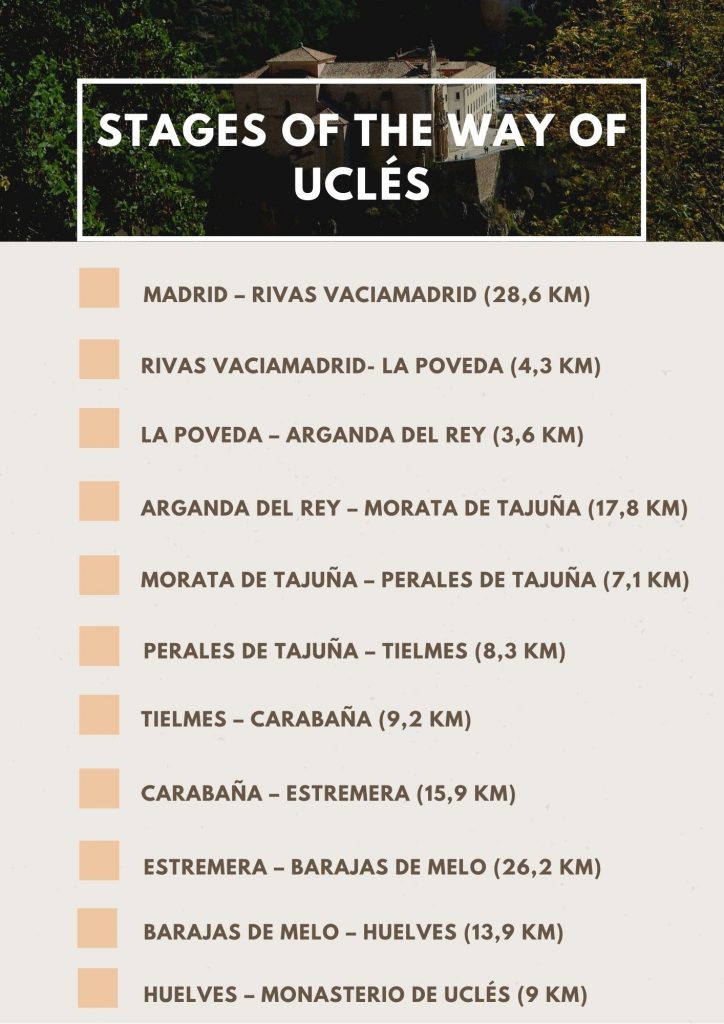 The pilgrim’s credential and the Uclessiana

This path, just like the Ways of St James, has its own credential which is stamped in the same way as the traditional pilgrim’s credential. Along the way you must receive a stamp at each stage to certify that you have walked the entire route. The proceeds from the sale of the credentials will be used for the maintenance of the Way of Uclés and the signage of the route. Once the route is completed, pilgrims can obtain the certificate, called Uclessiana, which testifies to the correct fulfilment of the pilgrimage. This will be obtained by presenting the credential correctly stamped upon arrival at the Monastery of the Apostle Santiago in Uclés.

To learn more about one of the paths of Santiago and make your itinerary, do not hesitate to contact us. At Galiwonders, we create your tailor-made experience. Buen Camino!