On December 28th, the day of the Holy Innocents is celebrated in Spain and in South America. But what is it about? Let’s discover the origins of this celebration considered a pagan-religious tradition and how it is celebrated in the world.

Origin of the Holy Innocents Day

If on the one hand we are used to playing tricks on our friends, family or co-workers, making them see that they have been “fools”, on the other hand the origin of this tradition is very cruel since it is based on a tragedy that goes back more than 2,000 years.

Christianity, began to celebrate this day to commemorate the death of children who were murdered by order of King Herod I the Great. The Three Wise Men went to visit him in Jerusalem, according to the Gospel of St. Matthew. They explained that they were looking for the future king of Israel, the Messiah, announced in the Old Testament, who had just been born as demonstrated by the appearance of a new star in the sky. Herod asked the Three Men to indicate the place where the Messiah would be born, but they did not do so.

Angry and not wanting to lose his power, the king sent an army of soldiers to Bethlehem. He ordered them to kill all children under the age of two, so to be sure that the newborn, Jesus of Nazareth, and future king of Israel, would die. However, the child managed to survive because his family escaped in time. 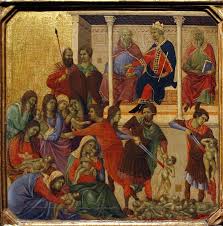 The name of this celebration, Holy Innocents, is due to the young age of these children who could not have committed any sin. Many researchers believe that this is a legend and that this tragic episode never happened since this fact is only mentioned in one of the gospels and in no other text of the time.

The Day of the Holy Innocents since the Middle Ages

Like many other religious traditions, also the Day of the Holy Innocents was merged with a pagan rite in the Middle Ages. It was celebrated on the days between Christmas and New Year. It was a kind of carnival in which people dressed up and there was music and a lot of food. Also, behaviors unacceptable on other dates were allowed. Young people dressed up as priests and even chose their bishops and pope for the day. A world turned upside down to protest against the harsh situation imposed by the church.  A certain similarity in the anti-conformist and evasive character of this festival is found in some celebrations of Ancient Greece and Rome.

Celebrated mainly in France, England, Germany and Italy, this festival was even represented by Victor Hugo in Nôtre Dame de Paris. Nowadays the jokes are more “childish” and this tradition has spread almost all over the world, although in countries like Germany, France, Italy, United States, United Kingdom, Brazil and Canada it is celebrated on April 1st under the name of All Fools’ Day.

How is Innocents’ Day celebrated?

The typical jokes that are played on that day are innocent tricks such as telling lies to friends and family or publishing false news in the media. These jokes are not too serious and are made with the intention of having a good time together. Among the most common ones we find:

All over Spain this party is celebrated in original ways and, during the Innocent Gala, funds are raised for children’s organizations. This is a charity event that has been held since 1995. In addition, throughout the peninsula “battles” are held with eggs (in Fraga -Huesca) and with flour (in Ibi-Alicante), young people dress up and participate in the Dance of the Crazy (in Jalance-Valencia). Moreover, in cities like Montserrat, Burgos and Palencia, they even dress up a child as a bishop.

Remember not to fall for any jokes this 28 of December if you are in Spain or South America! If you want to know about other traditions celebrated at this time of year, don’t miss this article.