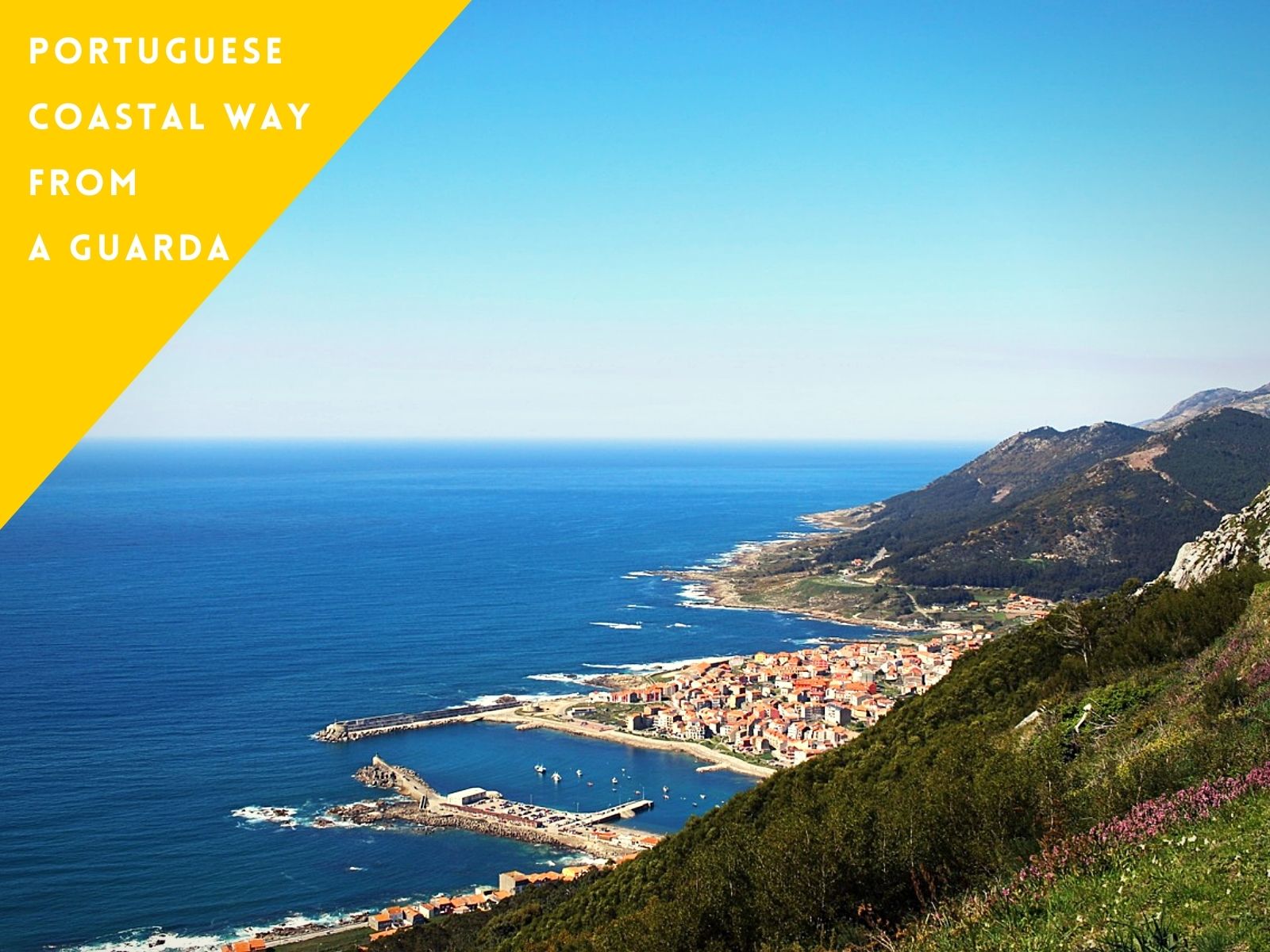 Pilgrims, on their way to Santiago de Compostela, can choose among many routes but the Portuguese Ways remain among the most popular options. Let’s see the stages, with maps and distances, of the Portuguese Coastal Way from A Guarda.

Portuguese Coastal Way from A Guarda

The Portuguese Coastal Route from A Guarda has experienced an impressive growth in recent years. It is one of the youngest routes of the Camino de Santiago, as far as official status is concerned, but it is already the third in number of pilgrims (following the French Way, and the traditional route of the Portuguese Way).

The last 100 km of the Portuguese Coastal Way normally begin in Baiona but many pilgrims want to start their route one stage earlier to enjoy the incredible landscape that the stretch from A Guarda to Baiona offers. Pilgrims can enjoy wonderful views of the Atlantic Ocean on their left and their walk becomes a unique experience. In addition, this coastal stretch allows pilgrims to get to taste the delicious seafood offered by the gastronomy of the area. If you want to walk this route at the beginning of July, don’t miss the Fiesta de la Langosta (Lobster Festival) of A Guarda!

Number of pilgrims on the Portuguese Coastal Way

This route has experienced considerable growth in recent years. For obvious reasons we are not going to consider the 2020 figures as very few pilgrims were able to walk the Camino due to the Covid-19 pandemic. However we can see an increase from 2018 to 2019.

Is the Portuguese Coastal Way an official route?

Yes, for some years now, the Portuguese Way along the Coast has been recognized as an official Jacobean route. This distinction is a recognition of the historical and cultural value of the route.

In this case, its official status is based on the presence of two hospitals for pilgrims during the Middle Ages. The recognition also means that, from the public administrations, the route has been taken care of with special attention. How? Increasing the signaling, the infrastructures along the route, and protecting especially the path.

In fact, from the Council of Pontevedra, a great effort is being made to promote the Portuguese Coastal Route throughout the world. In Galiwonders we are convinced that many pilgrims will choose this route to reach Santiago during this Holy Year Xacobeo extended until 2022.

Stages of the Portuguese Coastal Way from A Guarda

The first stage, from A Guarda to Baiona is quite long but very bearable because of the views over the ocean and because the route is not too difficult. However, if you want to divide this and other stages in two, there are no problems. At Galiwonders we offer tailor-made itineraries such as the Portuguese Coastal Way Easy so that each pilgrim can walk at their own pace.

Both the fishing villages of A Guarda and Baiona are worth a visit. Along this stretch, you can also stop and admire the famous 12th century Cistercian Monastery of Oia. While this section is very pleasant for pilgrims on foot, the terrain can be a bit tricky for pilgrims on bicycles. That is why we advise pilgrims to take the stone ramp from the beach of Area Grande to the PO-552 road, and then to use the bike path to Baiona.

Today’s stage is shorter than the previous one but presents some difficulty. We leave behind the town of Baiona, considered one of the most beautiful villages of the Camino de Santiago to continue towards the largest city in Galicia, Vigo. Be prepared to find a strong difference between the quiet landscapes of the previous days and the chaotic atmosphere of a big city.

This stretch will allow you to continue enjoying the beaches of the coastline and if you are doing the route in the warmer months you can also take the opportunity for a refreshing swim. To know more about the Way from Vigo to Santiago, check this post with maps and distances. Pilgrims who start their way in Vigo, will also get the Compostela certificate, once they finish their route. In fact, Vigo marks the 100th Km of the Portuguese Way, that is the distance needed for the accreditation. 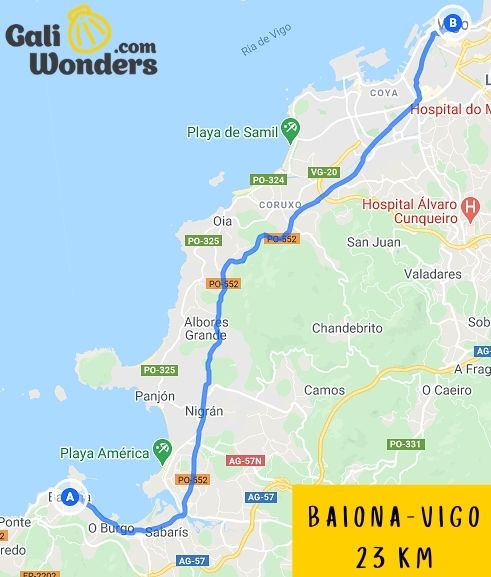 Today’s route is much easier than the previous days and you can finish it in 3 hours if you walk at a good pace. Today you will walk along the Senda da Traída das Augas, with forests and panoramic views over the estuary. Such a nice route! 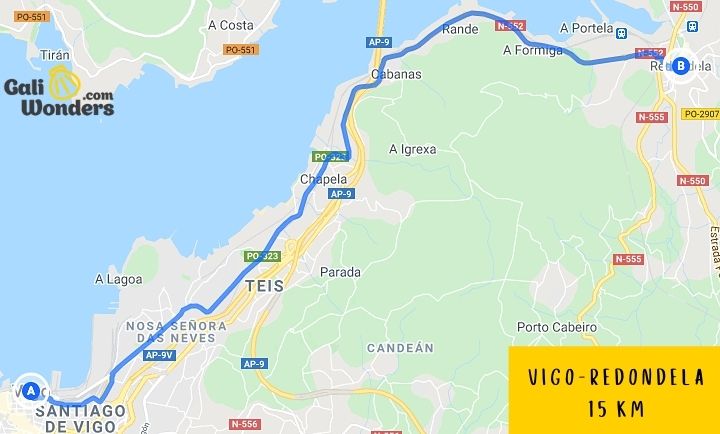 Once in Redondela the Portuguese Coastal Way and the Portuguese Central Way will converge, so you will find a greater number of pilgrims from here on. Although this section is quite short, we advise you to take something to drink and eat, as there are almost no places to stop for lunch.

If you feel strong enough, you can go until Arcade and thus reduce the kilometers of the next day (stage to Pontevedra). In total you would add about 7 km more to your walk. You can get an idea of what awaits you by watching the following video!

If, as we said before, you have decided to walk more kilometers in stage 3, today you will have to walk a little less to reach your destination, Pontevedra. In this section you will enjoy the views of the Verdugo River in the emblematic village of Pontesampaio, located just after Arcade. This place is known for the famous Battle of Pontesampaio, which took place in 1809 during the Spanish War of Independence against the French.

After leaving Pontesampaio behind, get ready for a climb considered by many the hardest of the entire Portuguese Way: the ascent of A Canicouva which lasts just over 1 km. The difficulty is represented by the type of terrain that becomes steep, rocky, and irregular, which makes it complicated especially for bicycles.

Today’s stage is simple and with few slopes. The tracks are quite easy, in fact, you will walk on asphalt or dirty road. Our recommendation is to stop at the Natural Park of the Barosa River to refresh yourself and get to know this natural paradise. There, you will find windmills and waterfalls, in the middle of Galician nature. This magical place will allow you to enjoy a well-deserved rest before continuing on your way. Today’s stage ends in Caldas de Reis, a town famous for its hot springs.

This stage runs through quiet stretches and passes through small Galician villages. There are some slopes but in general they are quite moderate. At the end of today’s stage, you will arrive at Padrón, famous for its small green peppers (some are spicy and some not) and for having been the first point of land sighted by the ship that carried the remains of the Apostle Saint James. It is also the birthplace of great writers such as Rosalía de Castro or Camilo José Cela.

Today’s section is one of the longest so we advise you to leave early in the morning so as not to arrive too late. Finally your last stage has arrived and soon you will be able to enjoy the wonderful Santiago de Compostela. Do not forget to ask for your Compostela when you arrive at the Pilgrim’s Office and stroll through the historic center of the city declared World Heritage Site by UNESCO.

If you have time, we recommend you to start your route in Porto, so you can also get to know the North of Portugal, and visit highly valued places such as Esposende or Viana do Castelo. However, if you only have time to travel the Galician part of the route, don’t worry! The natural spectacle will not be less impressive. The southern part of Galicia will allow you to discover fishing villages such as A Guarda (right on the border with Portugal) and its forts, the Monastery of Oia, Baiona and all its history related to the discovery of America. But also the largest city in Galicia, Vigo, from where you can see the Cies Islands on the horizon.

If you want to walk this or any other Camino to Santiago de Compostela, do not hesitate to contact us. At Galiwonders, we are happy to help you plan the best itinerary for this great adventure, ¡Buen Camino!