The Via de la Plata was an old Roman road that united the cities of Mérida and Astorga. Since the Middle Ages, the route has been extended and used as a means of communicating southern and northern Spain. The Camino route that stemmed from it starts in Seville, and it is the most important trail out of those that bring pilgrims from the south.

This is, without a doubt, the longest Camino route: Seville and Astorga are 700 km apart, and the way to Santiago makes the trip 1000 km long.

It may be the longest, but the Via de la Plata route is one of the ways to Santiago that have some of the most interesting cultural heritage. The Via’s long history and the mix of cultures that have walked through it make this Camino especially charming.

During the Middle Ages, as the pilgrimage to Santiago de Compostela became more popular and Christian lands grew, the old Roman Via de la Plata became the way that pilgrims from southern lands used to travel north to Compostela.

This is a route filled with contrasts. You will be able to see and feel the differences in culture, history, architecture and ways of leaving of southern and northern spaniards. As you walk this Camino, also known as Camino Mozárabe (because the influence of islamic-christian peoples during the Middle Ages), you will be able to see the trails of the peninsula’s Muslim past, and the contrast between Andalusia, Castille and Galicia.

The peninsula’s Roman past is very present on the Camino as well: milliarius, bridges, arches and other exceptionally conserved monuments will take you 2000 years back in time.

As you walk you will leave behind cities with a long history, which you will be able to relive through its monuments. Some of them, such as Merida, Caceres and Salamanca, are UNESCO World Heritage sites.

Before getting to Astorga, the end of the original Via de la Plata, our route will make a detour in Zamora, to continue on the Camino Sanabrés. Sanabria lands are a frontier area, in between León, Ourense and northern Portugal.

You need to keep in mind that this is the longest Camino, so you will need almost 50 days to walk it from Seville to Santiago. However, if you only have one week, we recommend that you start from Ourense and walk to Santiago through southeast Galicia. That way, you will able to see Galicia’s rural areas, full of greenery, farmlands and small churches.

If you would like to make any changes and adapt the route to your needs, do not hesitate to contact us. We will make sure to take care of the logistics so that you can focus on enjoying your adventure! 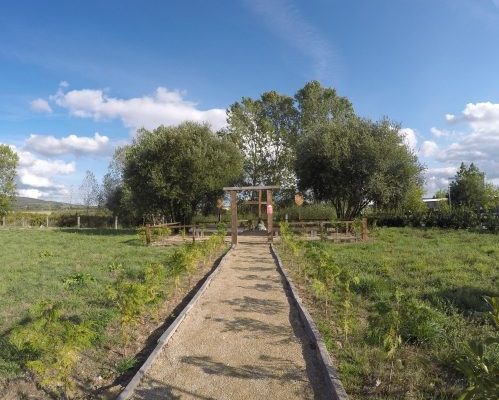 From490 €
Max People : 100
0
Manage cookie consent
To offer the best experiences, we use technologies such as cookies to store and/or access device information. Consent to these technologies will allow us to process data such as browsing behavior or unique identifications on this site. Not consenting or withdrawing consent may negatively affect certain features and functions.
Manage options Manage services Manage vendors Read more about these purposes
See Preferences
{title} {title} {title}
×