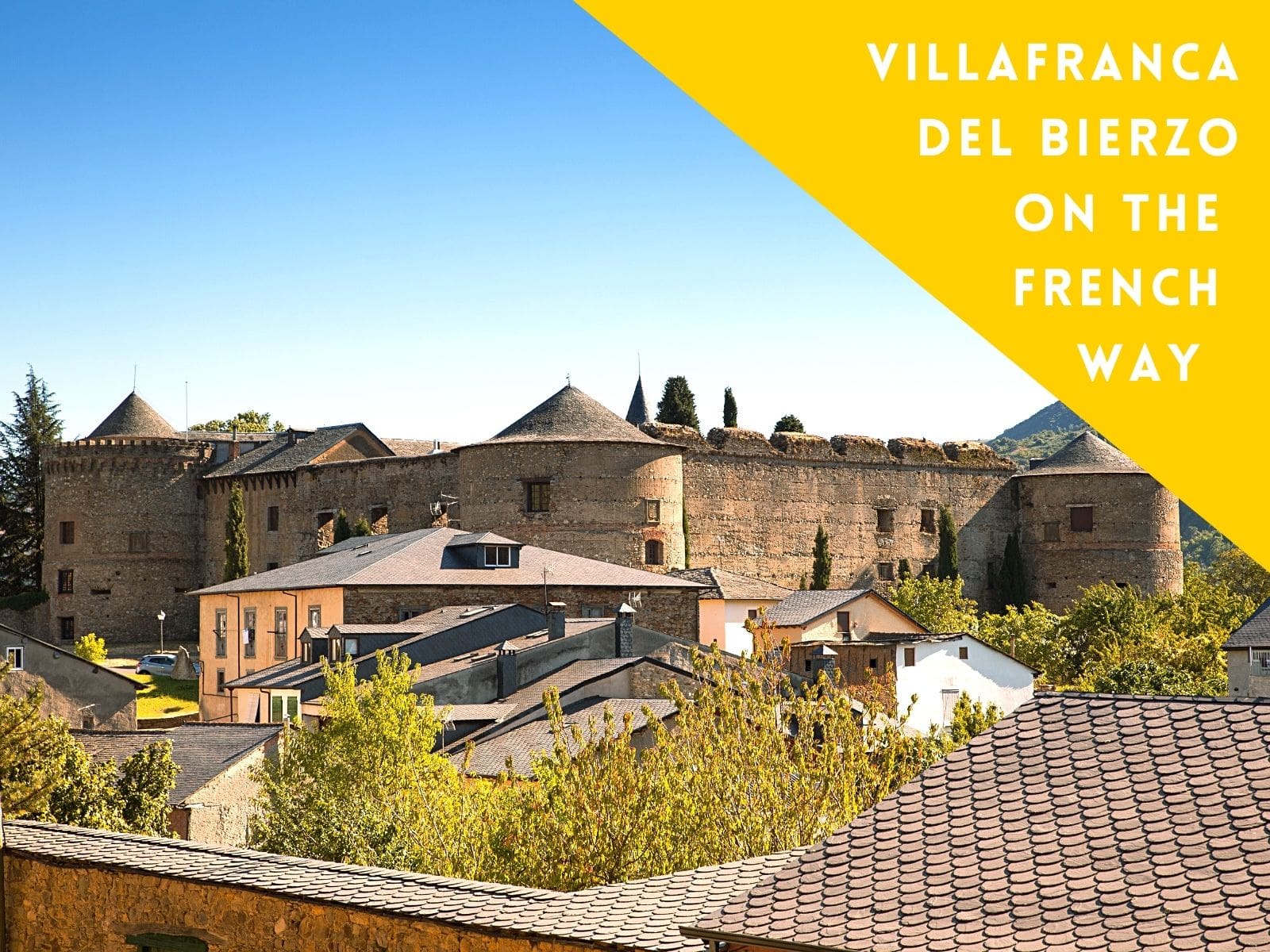 Many pilgrims decide to start their journey in Villafranca del Bierzo on the French Route. In this way, they can get to know another autonomous community (Castilla y León) before entering Galicia. In addition, those who choose this option want to walk one of the most difficult sections of this route, that is, the ascent to O Cebreiro. For many, this route is a key part of the pilgrimage to Santiago, which, besides being a wonderful experience, is a proof of the pilgrim’s effort and endurance. Let’s find out now what you can visit in Villafranca del Bierzo and some information about the history of this town.

History of Villafranca del Bierzo on the French Route

The origins of Villafranca del Bierzo date back to pre-Roman and Roman times, as evidenced by findings from the Neolithic and Bronze Ages. The Roman Empire developed here one of the largest and most articulated gold mines in the Peninsula. At only 35 km by car, you can reach the Medulas, an archaeological site that was declared World Heritage in 1977 for the extraordinary conformation of the area, formed as a result of Roman excavations.

With regard to the period in which pilgrimages to Compostela began, it is necessary to go back to the moment in which the remains of the Apostle Santiago were discovered in 813 and then to the first routes to Santiago de Compostela. The legend that tells the true origin of the city, refers to the building of the Monastery of Santa María de Cluniaco ó Cruñego, a place where black monks (French Benedictines of Cluny) settled in 1070 under the reign of Alfonso VI. Their function was to assist and rescue pilgrims on their way to the Cathedral of Santiago. These same monks, according to tradition, were the ones who imported the vine to this territory. 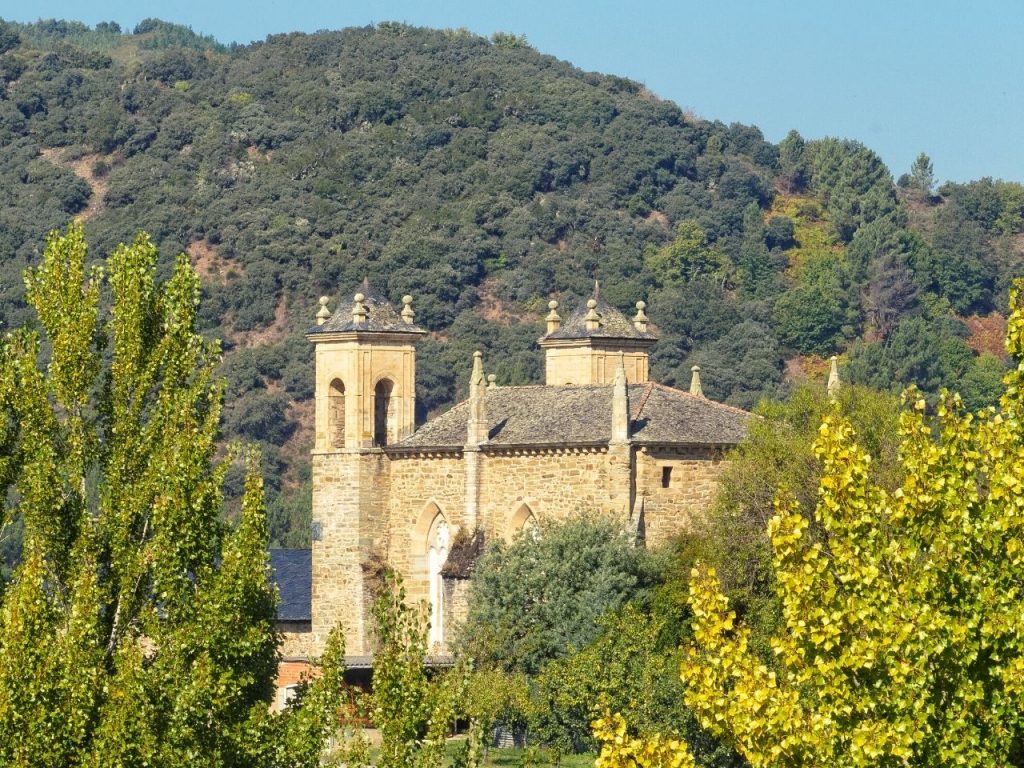 Nowadays, the city of Villafranca del Bierzo is known for its artistic and cultural heritage, for its importance in the Jacobean Way and for its fame in wine tourism. Let’s discover the main attractions of this town and what you can’t miss during your stop in this stage of the French Way.

What to see in Villafranca del Bierzo

The Plaza Mayor (Main Square) as its name indicates, marks the starting point of the historic center of the city. Simply wandering through the narrow streets of the center, will allow you to learn more about this medieval town, its renaissance palaces such as Torquemada‘s and its baroque and religious architecture. From here you can see a building from the thirteenth century, the Convent of San Francisco, in the highest part, whose foundation is attributed to Doña Urraca.

Built in the sixteenth century, the Castle of Villafranca del Bierzo, is undoubtedly a good starting point for your visit to this town. You will notice that the appearance of this building does not have the defensive character of the castles of the time. In fact it was born as the residence of the Marquises of Villafranca and not as a defensive fortress. The castle was set on fire by the French, partly rebuilt and was also used as a prison. Unfortunately it is not open to the public. 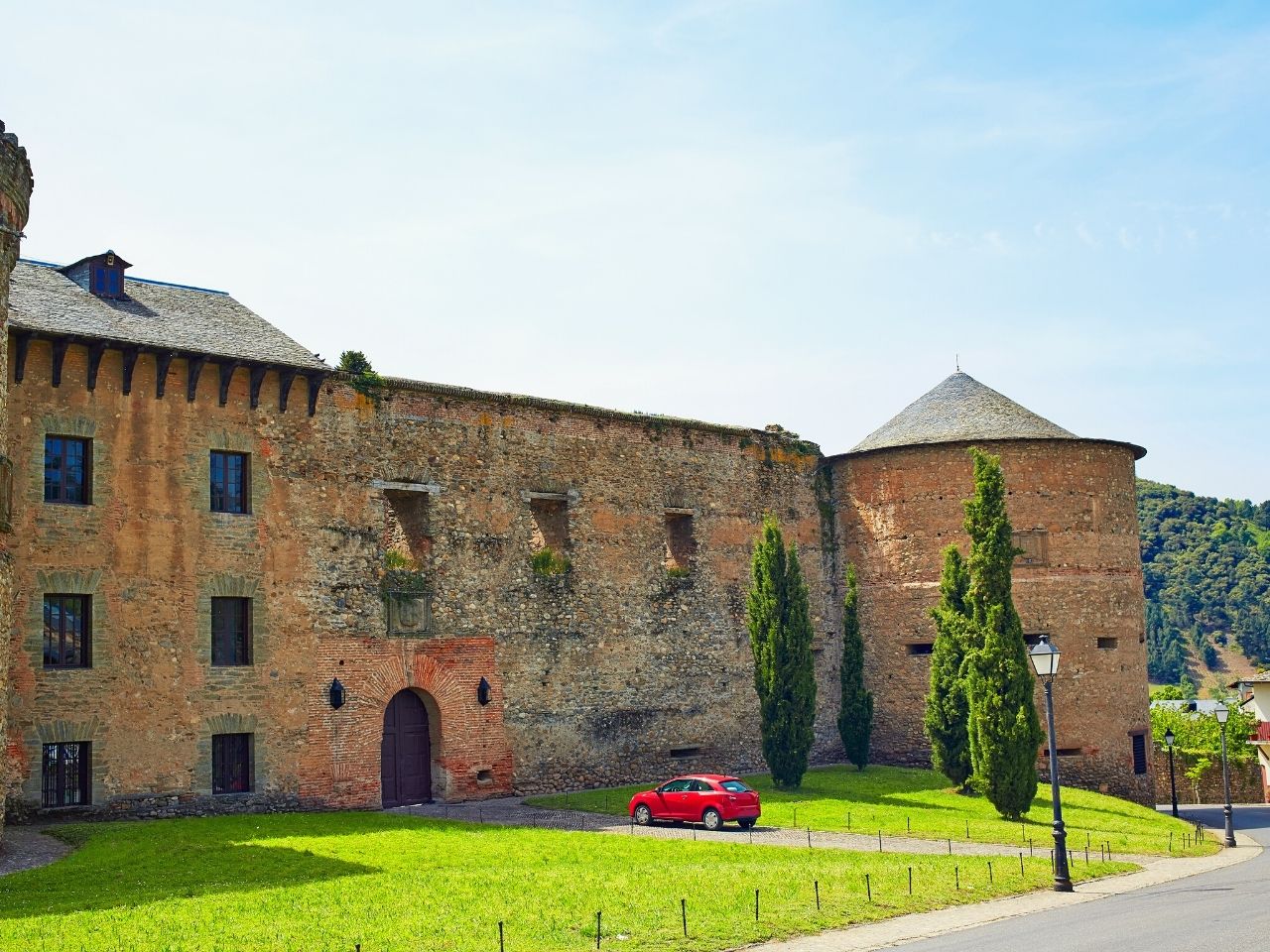 You can not miss a visit to the Church of Santiago, just opposite the Castle, from the XII century, for its strong link with the pilgrimage to Santiago. Here, in fact, is the Door of Forgiveness, the place where pilgrims who can not continue to Santiago, get the same spiritual benefits that those who arrive at the end of the path. In the Compostelan Holy Years (like this 2021 and the next 2022), the door of this church remains open and offers the same rights to obtain the Plenary Indulgence as the Cathedral of Santiago.

In addition, you will find the Town Hall of Villafranca, dating back to the 19th century that houses a very nice theater from 1905. If you have enough time, we recommend you visiting both the Convent of San José and the Convent of los Anunciados (both built in the 17th century). Indeed, one of the most visited buildings is undoubtedly the Collegiate Church of Santa Maria, declared a Site of Cultural Interest. Also, a stop at the Convento de San Nicolás el Real, from the 17th century, is recommended. Here you can visit the Museum of Natural Sciences and Ethnography ‘Padres Paules’.

What you can’t miss in Villafranca del Bierzo

As always, we like to talk about the culinary delights you may encounter along your way. In this case, in Villafranca we recommend you to taste the botillo, (an elaborate dish made with different parts of the pig and potatoes), the different dishes of beef, Bierzo peppers, empanada and pulpo, without, of course, forgetting the delicious local wine (for red wine we should mention the Mencía variety and for white wine the Godello one). Apples, pears, chestnuts, cherries… are also renowned in this area. In short, you will have many choices for your meals!

In terms of traditional festivals, you can enjoy the Feast of San Tirso on January 28, Carnival or Easter. On the 1st of May, the Festa do Maios is celebrated. This is a pagan festival for celebrating the arrival of Spring, a symbol of prosperity, and the end of winter. During this festival there are songs and dances, around figures adorned with flowers, leaves and fruits that obviously represent trees and the natural world.

Remember that after this stage in Villafranca del Bierzo, you will have to walk the most difficult stage of the French Route in Spanish territory (28.5 km with 900 meters of elevation gain). In fact the hard climb to O Cebreiro, the first Galician village of this route, waits you. For this reason, we recommend that you replenish your energy and have a good rest in Villafranca del Bierzo, before starting your next stage. Buen Camino!

If you are interested in the French Way and would like to receive a tailor-made itinerary, starting from Villafranca del Bierzo or another location, do not hesitate to contact us. At Galiwonders we are your local experts on the Camino!