Have you ever wondered about the meaning of the scallop shell on this pilgrimage? When we talk about the Way of Saint James, some elements that symbolize this journey come to our minds. Among them we find the pilgrim stick, the cross of Santiago, the pumpkin, and certainly the scallop shell.

Nowadays we can find this shell almost everywhere, in fact we also know it as the pilgrim’s shell. Many people already leave home with a scallop shell tied around their neck or backpack, while others buy it at the end of their journey, once in Santiago, to take home a souvenir of the pilgrimage.

Today we will investigate some legends and myths, looking for an explanation for the choice of this symbol associated with the Way to Santiago.

The history of the scallop shell on the Way

Some people find an answer in the meaning of the French or German translations of the word “scallop“, respectively coquille Saint-Jacques (Jacob’s shell) and Jakobsmuschel (Jacob’s mussel). Its own scientific name (Pecten jacobaeus) refers to the Way of St. James. In Italian, the scallop shell is also known as the comb of St. James.

The legends and stories that refer to the scallop shell, begin as early as pre-Christian times. In Roman times, in fact, the pagans already walked a route, called the path of Janus, which ended in Finisterre. Right there, at the End of the World, pilgrims would collect a shell from the sea to show that they had finished their journey.

The beginning of this path was in the Temple of Venus, Roman goddess of love. This goddess, who, according to legend, would come out of the sea in a scallop shell, became a symbol of fertility and personal rebirth along the way.

This image of Venus is probably familiar, thanks to Botticelli’s famous painting, The Birth of Venus, in the Uffizi museum in Italy. 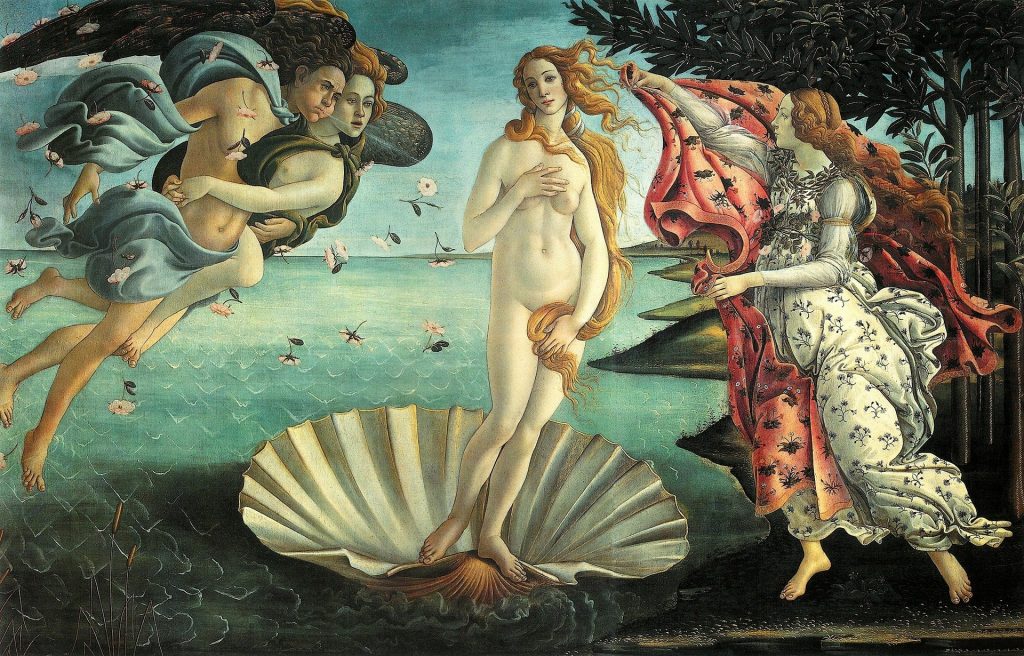 The legend of the scallop shell

If we continue to investigate among the legends that refer to the scallop shell in the way, we find then some myths directly related to the figure of the Apostle St. James.

One of these legends tells that during the celebration of a wedding, the groom mounted a horse and threw himself into the sea to show his love to his wife. Overwhelmed by a strong wave, however, everyone thought that he would not survive.

On the contrary, he managed to emerge together with his horse, covered with scallop shells that had protected him. A few days after this event, the remains of the Apostle Saint James, would arrive by sea to the Galician coast.

As a symbol of faith and gratefulness for this miracle, the man made a pilgrimage to Santiago with a scallop shell. 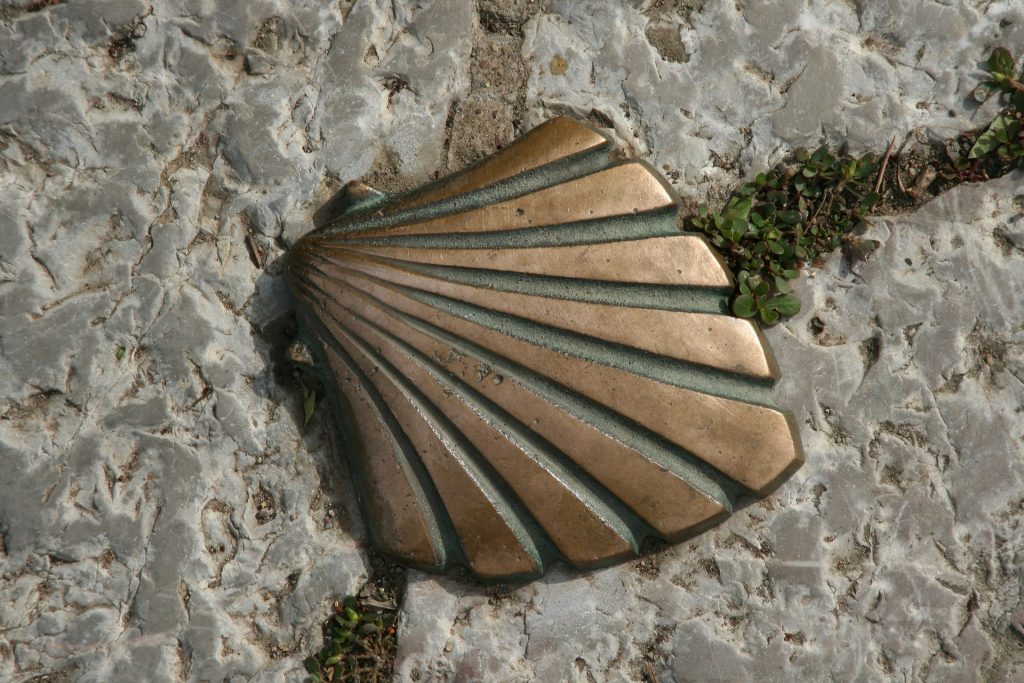 The use of the shell in the past

Shells were already used in Roman times, as decoration of churches, as amulets for luck and even as a symbol of resurrection (found in early Christian sarcophagi). In addition, even today, in some churches it is still possible to find this symbol in the holy water font.

We must not forget that in the Middle Ages, presenting the shell on their way back home, was considered as a real certification for having concluded the pilgrimage. In fact, it was shown to the authorities to be exempted from taxes or from the penalty received.

Also, for some people, the shell was a very useful tool to get supplies of water and food. At some points along the way, such as churches or other resting places, the shell was also used as a measuring method for the distribution of food to pilgrims.

The scallop shell as a symbol today

Nowadays, the scallop shell is used as a symbol by pilgrims to recognize themselves along the way. Moreover, the scallop shell is often associated with the yellow arrow that represents the Way of Saint James to indicate the path. We can find it painted on the ground, on the walls, on the houses along the way or in the many milestones that indicate the route and often also the remaining kilometers.

Another interpretation that we find when we investigate the meaning of the scallop shell would be the metaphorical representation of the different roads that led to the Tomb of the Apostle in Santiago de Compostela. All the paths in fact converge in an identical point, the Cathedral. In fact, today as in the past, the pilgrims who undertake this path come from different places. 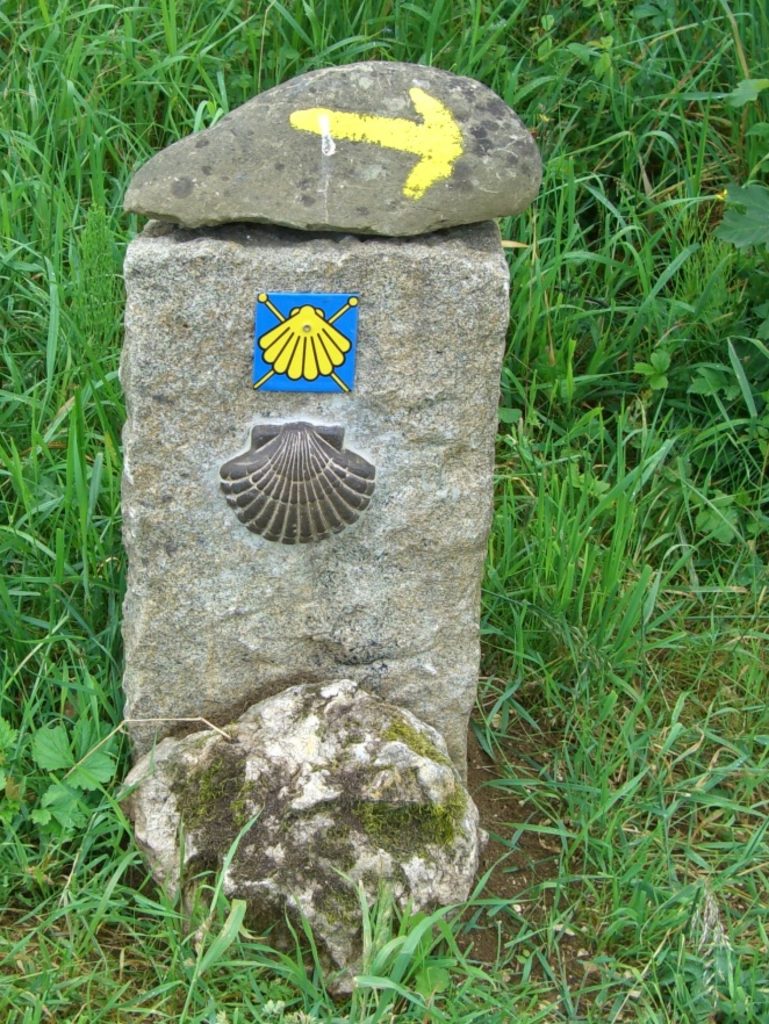 We conclude this post with another legend that refers to the meaning of the shell. According to this myth, the shell was considered a symbol of protection and knowledge, and the pilgrim should have thrown it into the sea once he reached the ocean, in Finisterre. This would be a gesture of thanks for the protection received along the way and would demonstrate that we want to share with all the other pilgrims the knowledge obtained.

For this reason many consider that the true path ends here. If you want information about your itinerary in Finisterre, do not hesitate to contact us. At Galiwonders, we will be happy to help you build your ideal experience.