Registering almost 21% of total pilgrims, the Portuguese Way ranked second in 2019. According to the Santiago Pilgrim’s Office, more than 72,000 people obtained their certificates after walking the Portuguese Way. In fact, this route ranked only after the French Way, and was followed by the more recent Portuguese Coastal Way (with more than 22,000 pilgrims). Let’s discover together the Portuguese Way from Valença in this post.

The Portuguese Way from Valença

Traditionally, pilgrims who choose to walk the last 100 km of the Portuguese Way start in the town of Tui. However, today we want to find out why the number of pilgrims who decide to start from Valença do Miño, just 3 kilometers away from Tui, is growing. If you are interested in learning more about the history of the Portuguese Way, we invite you to read this article.

Valença do Miño is a small border town in the district of Viana do Castelo, in the north of Portugal. It has a defensive wall, still in perfect condition, and undoubtedly is worth a visit. The fortification, wanted by the Lord of Vauban, Sébastien Le Prestre, to protect the city from invasions, was rebuilt in 1643 on the basis of the previous walls of the XII century. Its star shape is typical of many other villages.

This town is separated from the province of Pontevedra, in Galicia, by the Miño River, a natural border between Spain and Portugal. Pilgrims can cross the border thanks to the International Bridge of Tui. This construction, which has three transit sections (trains pass over it, cars circulate below, and pedestrians walk on the sides) was completed in 1885. 400 meters long, this iron structure is a true wonder that will allow you to enjoy the spectacular views of the Tui hills!

Valença is well known for its trade in tablecloths, towels and cloths but also for its delicious gastronomy and wine. Do not miss the typical dishes of the local cuisine! We assure you that the portions are very generous and the prices are more than affordable.

During your visit to Valença, do not miss some religious buildings of great interest such as the Church of Nosa Senhora don Anjos , the Chapel of Bom Jesús with the statue of São Teotónio, (first Portuguese saint) and the Church of Santo Estevão. From Galiwonders we recommend you spending the first night here and starting the Portuguese Way the next day.

The first stage allows you to reach the wonderful city of Tui. Here you will be able to visit the imposing 12th century Cathedral of Santa Maria and the historic center of the town.

Tui is a very popular town along the Camino de Santiago. In fact, it is from this medieval town that most of the pilgrims, who decide to walk the Portuguese Way, leave. In the past, its elevated position allowed the city to be defended and nowadays it offers spectacular views of the surrounding area.

We recommend you to get lost in the narrow streets of this town characterized by the stone. Here, you will find Casa Salomón, the only Jewish house still preserved in Galicia (15th century). The Convent of Santo Domingo and the Church of San Telmo are also worth a visit. Continuing on an easy path, following the course of the Louro river, we will arrive at the town of O Porriño after crossing one of the largest industrial areas in Galicia.

However, since this route is not particularly attractive, we suggest you to pay attention to the indication and take the alternative route, even if it is slightly longer. Once in Porriño, there is plenty of services for the pilgrim. This was the birthplace of the architect Antonio Palacios, who was extremely important in the construction of many buildings in Madrid, especially in the Gran Vía. In his city, you can admire the Town Hall building, a very interesting work from a historical-architectural point of view.

Today’s stage has few up and downs, not too hard. Today’s route will take you through the town of Redondela, a small and quaint fishing village, famous for its Eiffelian-style railway viaducts (the Madrid and Pontevedra ones), and then on to Arcade. In this stretch you’ll see for the first time the Ría of Vigo. The views are truly unique!

In Arcade, a town near the sea and the capital of the oyster, you can see the beautiful Roman Bridge over the Verdugo River in Pontesampaio. After the victory against the French invaders during the War of Independence in 1809, this place became a symbol of the courage and resistance. 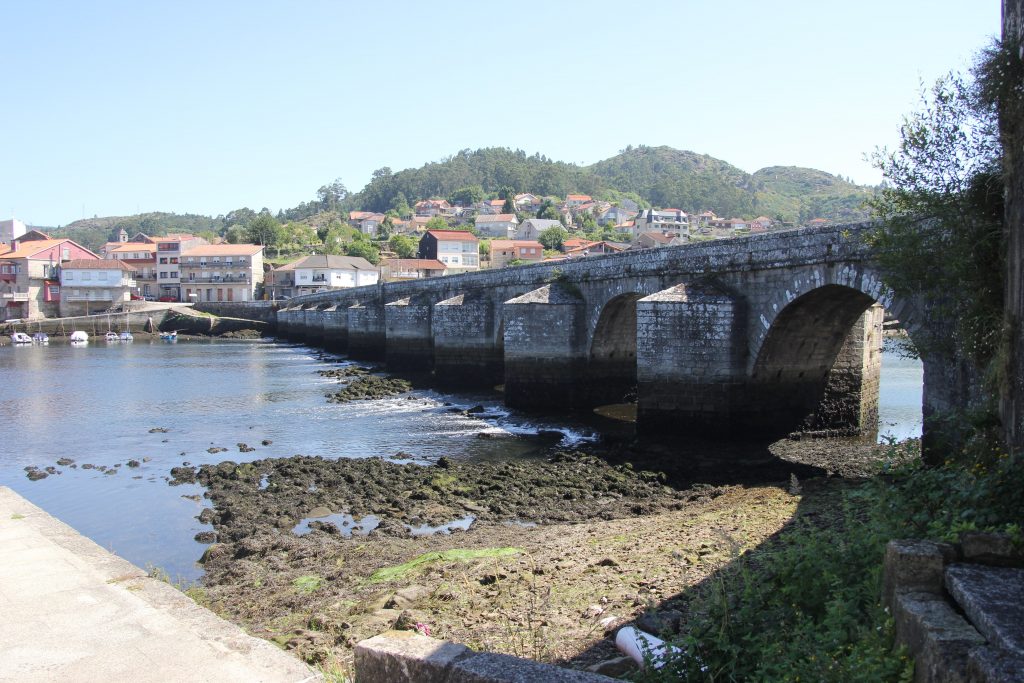 Today’s stage will take you to Pontevedra following the Tomeza River. Fortunately, this stage is very short. This will give you the opportunity to get to know better this city that has one of the best preserved historical centers in all of Galicia. To learn more about Pontevedra, don’t miss this post.

Among the must-see visits of the city are the Basilica of Santa María la Mayor, the Church of San Francisco, the ruins of Santo Domingo, and undoubtedly the Church of the Pilgrim Virgin, patron saint of the province of Pontevedra and of the Portuguese Way. Our advice is simply to wander the streets of the old town, admire the various squares, dominated by stone and granite, and feel the spirit of the city.  Before resuming your walk, don’t miss the local gastronomy. This unique cuisine, very varied in its offer, will be a great surprise on your way to Santiago. 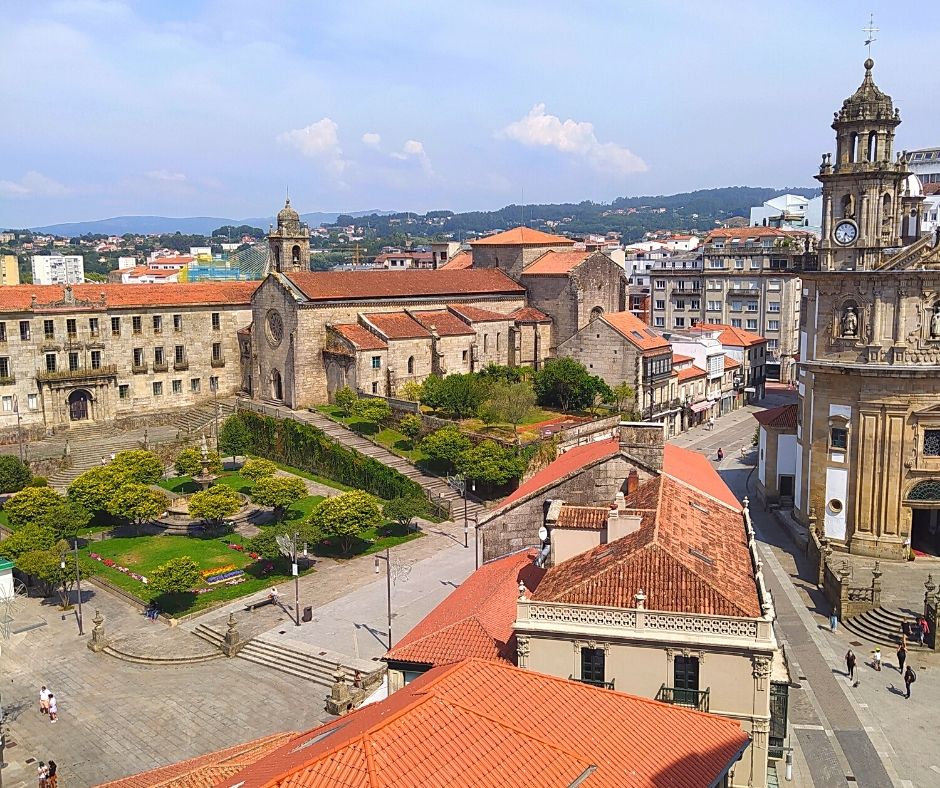 Today you will leave Pontevedra by crossing the Burgo Bridge and heading towards Caldas de Reis. Before entering a more rural landscape, you will pass through some small villages, such as Alba, where you can see the church of 1595 dedicated to Santa María de Alba. Continuing along the route, you’ll cross woods and small rivers and you’ll be able to rest in Barro, a typical stop for pilgrims. Here, you will discover a hidden joy: the Río Barosa Natural Park, with its waterfalls and mills. A magical place where you can refresh yourself before resuming the Way!

Following the path, you’ll pass several scattered houses with traditional vineyards, until you will reach Caldas de Reis, famous for its thermal waters.

The Way continues with tranquility through one of the most beautiful and characteristic parts of the Portuguese Way. You will fully immerse yourself in rural Galicia, passing through small villages, among mountains, rivers and enchanted forests.

It was along this river, one of the longest in Galicia, that the remains of the Apostle Santiago were transported to Pontecesures. This, which is known as the Traslatio, gave rise to the Spiritual Variant of the Portuguese Way. Don’t miss this post to learn more.

Padrón is a place known for its small green peppers, but was also the birthplace of great writers such as the Nobel Prize winner, Camilo José Cela, and home to the House-Museum of Rosalía de Castro, another very important Galician writer who lived the last years of her life here.

You have finally reached the end of your journey, but we recommend that you leave early because the distance to cover is quite long and you will have to make a slow but steady ascent to leave Padrón behind you. Moreover, Santiago de Compostela awaits you! Being able to arrive at a good pace to this splendid city will allow you to enjoy the magic of Santiago. Here you can visit the marvelous Cathedral, and pay homage to the Apostle Santiago. Don’t forget to request your Compostela certificate at the Pilgrim’s Office and treat yourself with a good lunch in one of the many restaurants in the center. You deserve it!

If you are interested in this itinerary along the Portuguese Way, or if you need information about any other route, please do not hesitate in contacting us.