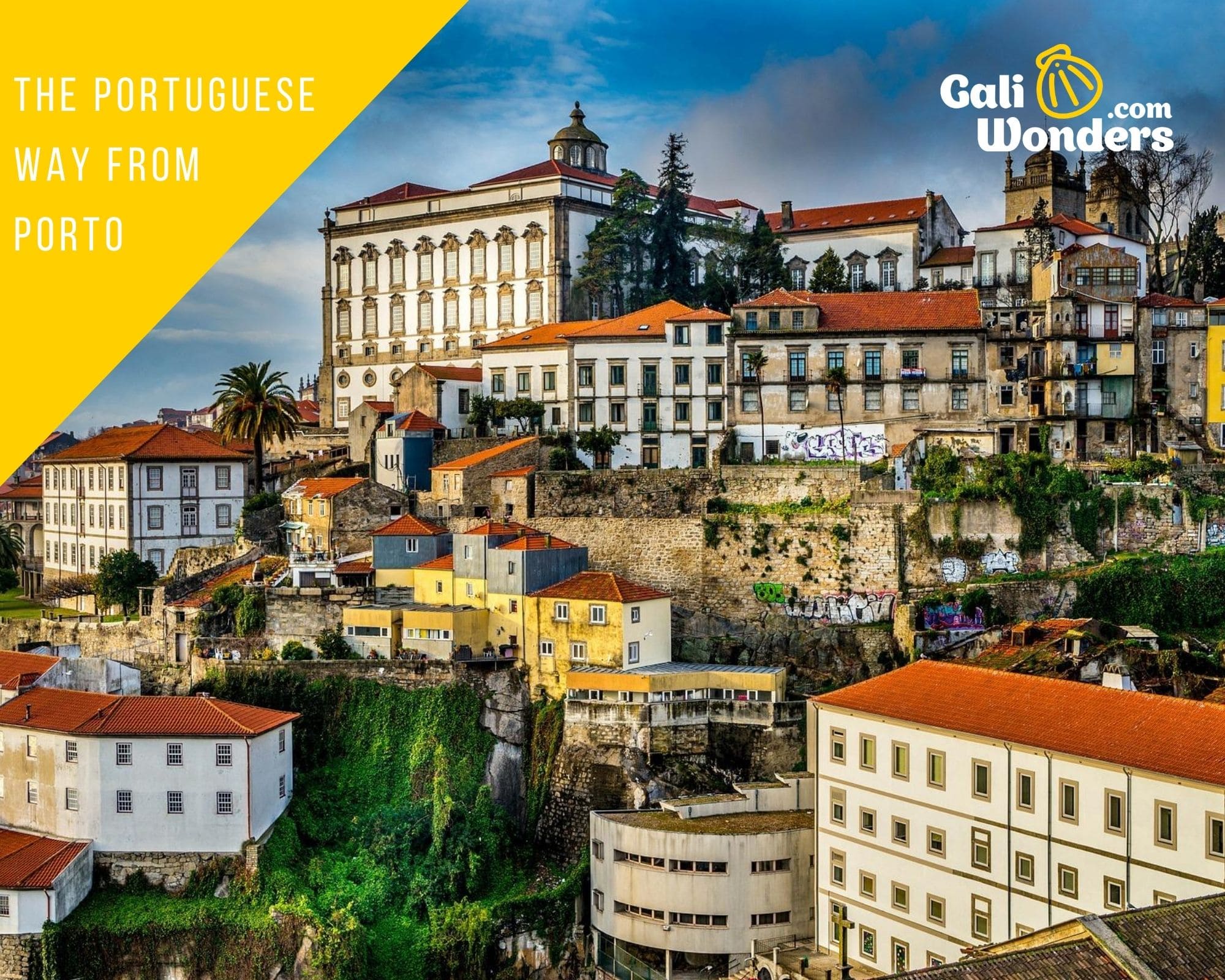 Do you want to make the Portuguese way from Porto?

Are you looking for a 200 km route and want to walk in two different countries?

Then read on to discover what awaits you on this wonderful route that will allow you to get to know the north of Portugal and the region of Galicia, in the north of Spain.

The Standard Portuguese Way or the Coastal Route?

In another post we will see the stages of the Portuguese Coastal Way, an ever more popular alternative among pilgrims who want to have incredible views of the Atlantic Ocean during their camino on foot or by bicycle. This last route was followed by 8.576 pilgrims in 2019, while the Interior Way counted with a 30.534 total pilgrims, according to the statistics of the Pilgrim’s office in  Santiago de Compostela.

The two Portuguese routes join in Redondela, so from that point the number of pilgrims will increase considerably.

If you want more information about the differences between these two roads, do not miss this article.

However, in this post, you will find all the information and maps with the distances that have to be covered to do the Portuguese Interior Way through Barcelos. There is also an alternative route that passes through Braga but the most chosen between the two is the first one (traditional route).

We start in the beautiful city of Porto

You may not know that the historic centre of Porto was declared a World Heritage Site by UNESCO in 1996. This coastal city in northwest Portugal, founded by the Celts on the Douro River, was occupied by many civilizations. Among them, the Romans, the Visigoths and the Muslims.

Porto is also the second largest city in the country after Lisbon and has become an international reference for its extraordinary wine and food offer.

Its charm is unquestionable. The colorful old town is famous for its bridges, its streets, the buildings of incalculable historical and architectural value, but also for its famous wine cellars and the wine produced in the area.

At Galiwonders, we always suggest our pilgrims to stay two nights in Porto to enjoy this beautiful city.

What to see in Porto?

One of the most emblematic buildings is undoubtedly the train station of San Benito with very refined reproductions of scenes of rural life on tiles. 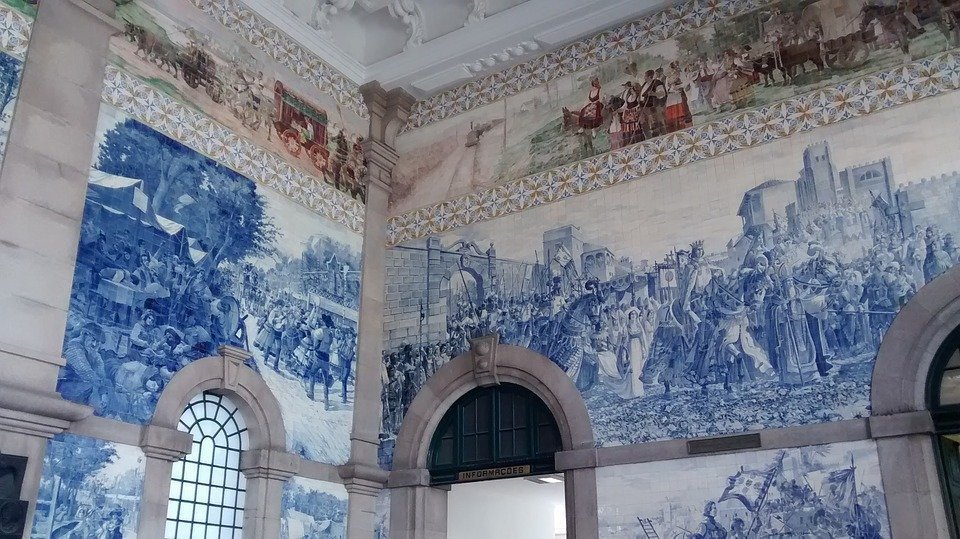 You can find this type of tile decoration in many buildings in the city, such as the Church of Carmen or the Church of San Ildefonso.

Before starting your journey we recommend you to visit:

The Church and Tower of the Clergy, The Bridge of Luis I, Praça da Ribeira, the Cathedral of Porto, the Fernandine Walls.

If you are a Harry Potter fan, you can’t miss the beautiful Lello Bookstore (where the author J.K. Rowling was inspired to create the library of the Hogwarts school). We don’t know if it’s true or not but the library was declared one of the most beautiful in the world, so it is worth a visit.

Among some of the most curious elements you can find in Porto, is the narrowest house in Portugal.

In Carlos Alberto Square, to solve the problem of building two churches together, the Church of the Carmelites and the Church of Carmen, (forbidden by the law of the time) a house was built in the middle of the two.

So narrow that you can hardly notice it!

Another curious fact, is to find about thirty London cabins around the city. These have been given by England to Portugal as a symbol of friendship between the two countries.

A touch of color and eccentricity for this wonderful and modern city.

The stages of the Portuguese Way from Porto to Santiago de Compostela are as follows:

We leave the city “of the bridges” behind from the subway in Maia, heading north. Today’s stage is 22 km long, not too difficult, but remember: we have other 11 stages to walk before arriving to our final destination! We will come across some very nice churches along this route before reaching the village of Fajozes.

Today, the road in a northwest direction will be similar, in level of difficulty, to the first stage. We will have a fairly easy route, with a couple of climbs but with very beautiful landscapes. In addition to crossing eucalyptus forests, which will offer us a break from the sun, we will also pass over Dom Zameiro Bridge before we reach the city of Arcos.

This stage is a bit more difficult than the previous ones. We will continue to go deep into the enchanting forests and cross the typical villages of the north of Portugal until the city of Barcelos. Here, we can learn about the oldest history of Portugal by visiting the Archaeological Museum of Barcelos.

We also have the opportunity to discover the legend of the Rooster of Barcelos whose figure is related to the Way of Saint James. Its statue can be visited in the same museum.

From the 50s and 60s the symbol of the Rooster, acquired a great importance for the national tourism and the Portuguese identity in general. Today, this image has become the emblem of a modern Portugal, associated with the international development of the Portuguese country.

Today’s stage is the longest and most difficult of all the Portuguese Way so we advise you to get up early to start your journey. Although the landscapes we will cross, are worth the effort, prepare yourself for an intense day. The climbs that await us today will put you to the test, but a bit of tiredness won’t stop us, will it?

Moreover, at the end of this stage, you will be able to enjoy one of the most beautiful villages in all Portugal, Ponte de Lima, and the oldest one, too.

The historical buildings of this small village characterize this city. They represent the great beauty and architectural importance that made Ponte de Lima so famous. You will be able to walk on the picturesque bridge, part Romanic and part medieval, and go back to the past of this town.

Next to the river we also find the medieval towers of Cadeia Velha and São Paulo.

Today, another stage of medium difficulty is waiting for you. Get ready because today there will be a lot of unevenness and an important climb up to Portela Grande Alto. However, the panorama will be worth the effort! We will also pass through many villages with very beautiful churches.

In today’s stage we finally arrived in the Spanish territory, in Galicia. We’ll cross the Miño river, natural border between Portugal and Spain.

We will arrive in Tui after a day immersed in the nature of the Portuguese hills. This city is the starting point for most of the pilgrims who decide to do the Portuguese Way, having this route the minimum distance required to obtain the Compostela certificate (100 km on foot). Tui is a very beautiful medieval town, with one of the most important cathedrals in all of Galicia, the Cathedral of Santa Maria (XII century).

Here, you can also find the last jewish house, Casa Salomón, that is still preserved in Galician region (XV century).

It is worth a visit also to the Convento of Santo Domingo and the Church of San Telmo.

From today, we will notice an increase in the number of pilgrims. In 2019, 22,814 pilgrims started their route in Tui.

The road is a little easier today than in the previous days. When you arrive at Porriño you will be able to enjoy different services for the pilgrim and have a walk for the old town.

Another day of walking without too many unevennesses (only in the first part) and that is quite bearable. We arrive at Redondela, a charming fishing village. Moreover, we continue a little further to Arcade, a small town near the sea and where the famous Roman Bridge of Puente Sampaio is located. Here, in 1806, the Spanish troops won a great victory against the French invaders and since then it is considered a symbol of the bravery of this place.

A stage of only 11 kilometres will allow us to discover Pontevedra, one of the most visited cities in Galicia due to its picturesque historical centre and capital of the province. Pilgrims are fascinated by the old town, the Square of the Peregrina and its church (shaped like the shell of the Camino).

Not to be missed are the 16th century Basilica of Santa Maria Maggiore (right) and the Convent of St Francis (left), built almost entirely in the 14th century. 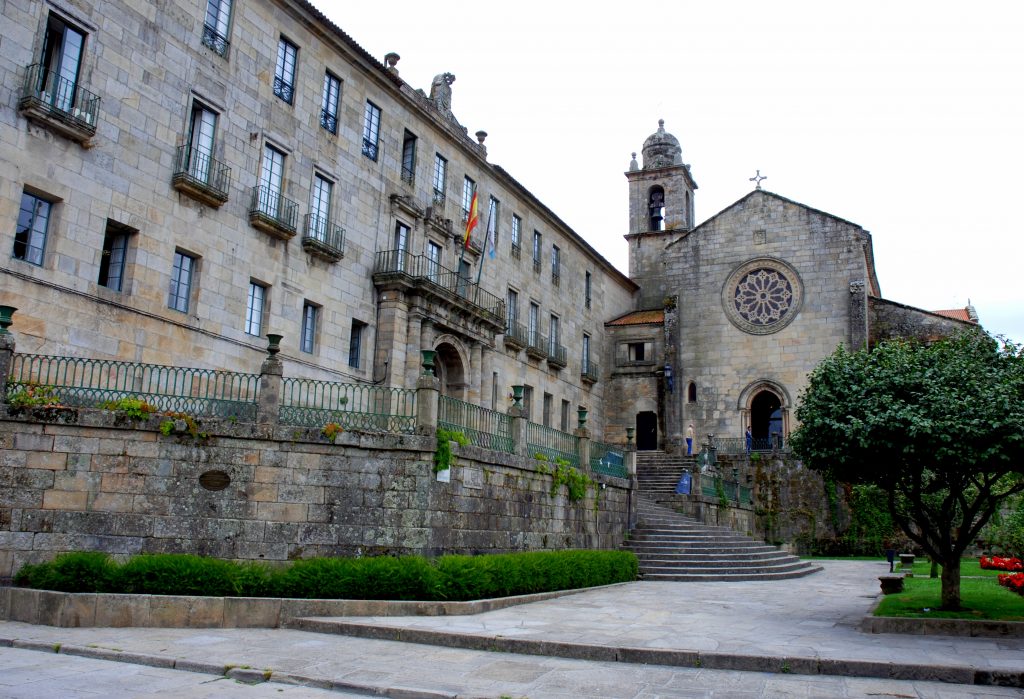 In addition, the gastronomy of this city offers delicious dishes thanks to the fresh products coming from its “ría”.

Don’t miss the seafood and a good glass of the white wine of the area, the Albariño.

Today’s stage is a little longer than the previous one but passing by Barro, you can take a break to contemplate the beauty of the Barosa River Natural Park, and its waterfalls and mills. We will arrive at Caldas de Reis, a very important city in Galicia for its thermal spas.

Today we’ll start the penultimate stage of our journey, are you ready?

We will pass again through the cultivated fields typical of Galicia and its rural environment, without presenting too many difficulties. Crossing the river Umia, we follow our route to the village of Padrón, famous for its small green peppers. Padrón, is of fundamental importance for the Christian pilgrims. According to tradition, the remains of the Apostle were moved here by boat, by his disciples, guided by the stars.

Today’s the last day on the road, well done!

In this last stage we will cross rural areas at the beginning and the landscape will become more and more urban as we enter Santiago de Compostela. Finally we arrive at our final destination.

What a thrill to see the Cathedral in front of our eyes after so many kilometers!

Don’t forget to ask for the Compostela at the Pilgrim’s office with your stamped credential along the Portuguese route.

In Galiwonders we recommend you to spend 2 nights in Santiago to enjoy the beauty of its old town, proclaimed World Heritage by UNESCO in 1985.

For any information, please contact us. We will be happy to help you create your own tailor-made trip.

Galiwonders is your local agency for the Way of Saint James!