An alternative pilgrimage route: walking the Camino de Santiago along the coast

There are many routes to choose from on the Camino de Santiago walk. Since the Middle Ages, thousands of pilgrims have chosen different routes to reach the sacred city and visit the remains of St James the Apostle. The choice among these routes depended on their circumstances and motivations.

The most popular route in number of pilgrims is the French Way, followed by the Portuguese Way. However, there is an alternative route of the Portuguese Way that stands out because of its spectacular views: the Portuguese Coastal Way or Camino Portugués de la Costa. This route has been recognized as an Official Jacobean Route two years ago and it is still quite unknown. It used to be the path chosen by those pilgrims who arrived into the Portuguese coast by boat. Those walkers who choose this walk will be able to enjoy the Camino de Santiago on a different way: following the Atlantic Coast in Northern Portugal and Southern Galicia. Cliffs, white sand beaches and small woods. These landscapes will surround you on the way to Santiago de Compostela. 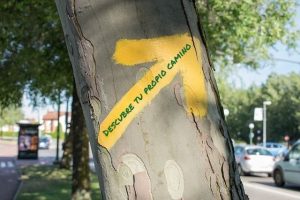 Origins and history of the Portuguese Coastal Way

The first testimonies we have about the Portuguese Coastal Camino date back from the XII century. The Galician writer and historian, Hipóolito de Sá, states that the Archbishop of Canterbury, Saint Thomas Becket, stayed at the Oia Monastery (in Oia, a village on the way) when he walked the Camino de Santiago (from a monastery in Portugal to Santiago de Compostela). 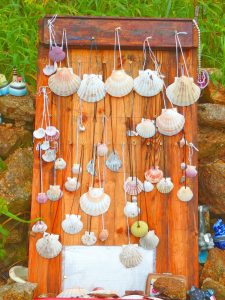 There are also some references that relate this route to the famous scallop shell, the most representative symbol of the Camino de Santiago. According to the legend, a knight on the day of his wedding, took part on a lance’s skill game, and he fell into the sea (the Estuary of Vigo). When everyone thought he was dead, the ship bringing the remains of St James the Apostle appeared. When the ship was closer to the land, the knight emerged, intact, from the sea with his horse. He was covered by scallop shells. This miracle is considered to be the beginning of the tradition of the Portuguese Coastal Way.

This route was traditionally chosen by those pilgrims who arrived into the Portuguese ports, coming from overseas. After reaching Portugal, they continued walking towards Santiago de Compostela.

After the XVI century, the decline of the route came. But nowadays it is becoming more and more popular.

The itinerary of the Portuguese Coastal Way

The Portuguese Coastal Way starts in Porto, and it follows the Northern Coast of Portugual. Once it Caminha, the route crosses the Miño River, and we arrive into Spain (Galicia region). Finally, once in Redondela, the path joins together with the traditional Portuguese Way, inland, until Santiago de Compostela.

The route covers 280 km approximately, from Porto to Santiago de Compostela, in thirteen walking days. If you do not have enough time, you can walk the last 100 km, from Baiona to Santiago (the minimum required to get the certificate). 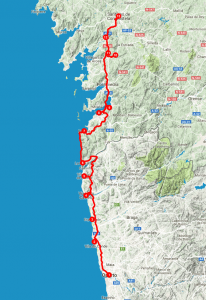 Why should you choose the Portuguese Coastal Camino?

All the Camino de Santiago routes can turn into an unforgettable experience, but the Portuguese Coastal Way will allow you to walk with the views of the Atlantic Ocean by your side. You will be able to walk through white sand beaches, monasteries… and the views of the sea can reinforce the most exhausted pilgrim. You will also be able to discover the popular Rías Baixas region, and its spectacular wines (which are very well known all over the world). But there is even more. Here you have 5 reasons to choose the Portuguese Coastal Camino:

What to see on the Portuguese Coastal Way

The city of Porto is the starting point of this route (the traditional Portuguese Way passes through this city as well). We strongly recommend visiting the historical quarter before heading off (it has been declared a World Heritage Site by UNESCO in 1996). Do not forget to taste the popular Porto wine. 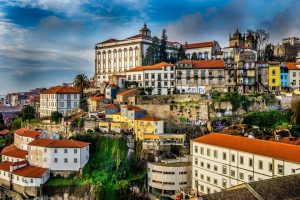 Many English pilgrims arrived in Porto to walk the Camino de Santiago. According to the testimonies, the city still gives off the English influence from the past.

After crossing the Miño River and continuing through Galicia region, one of the most popular spots is the Monastery of Oia. It was founded on the XII century, and was declared a place of Cultural Interest in 1931. As we were mentioning before, the Archbishop of Canterbury, Saint Thomas Becket, stayed in this place when he walked the Camino de Santiago.

This viewpoint located in A Guarda, offers amazing views of the estuary of the Miño River, the Atlantic Ocean and the mountains of Portugal and Galicia. It was an strategic point during the Roman period.

Here we can visit the popular fort, known as Castro de Santa Tecla, which is more than 2000 years old. There is also the medieval church of Santa Tecla.

Baiona is a very popular coastal town of Southern Galicia, well known because it was the first place that knew about the discovery of American. The caravel La Pinta arrived in this port after the long journey.

The Portuguese Coastal Way offers incredible views of the Cíes Islands, when passing through Vigo. They are also known as the Islands of the Goods.

This archipelago is formed by three islands, that host a Natural Park, and white sand beaches. It has become a very important tourist destination, and thousands of visitors take the boat during summer season to enjoy them.

The geological formation of these islands dates back from the end of the Tertiary; the sinking of some areas of the coast caused the penetration of the sea, and created this geological phenomenon known as “Rías” (estuaries).

Nowadays, the Islas Cíes are in the middle of the process of being declared a World Heritage Site by UNESCO. 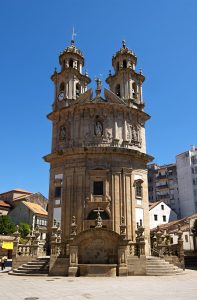 A stroll through the historical quarter of Pontevedra can be the best way to get some energy. If you are around, we strongly recommend you to visit the Church of La Peregrina (Iglesia de la Peregrina). This baroque temple is the only circular church of Spain, where the Pilgrim Virgin (Vírgen de la Peregrina) welcomes all the pilgrims walking the Portuguese Way.

Padrón is a popular stop on the Camino de Santiago, because it was the first piece of land seen by the ship that was bringing the remains of Saint James the Apostle. It is also the home town of important Galicia writers, like Rosalía de Castro. She is a symbol of Galicia region, and her poem, “Cantares Gallegos” (Galician chants) puts into words how sad it is to be far away from home; Galicia in this case.

And of course, Padrón is very popular because of the peppers. There is a Galicia saying that states: ‘‘Pementos de Padrón, uns pican e outros non” (which can be translated as: Padrón peppers, some of them are spicy, and others are not). We strongly recommend you to try them if you are around. The Portuguese Way is the only Camino de Santiago route that will allow you to try the Padrón Peppers in the place where they come from!

If you decide to walk the Portuguese Coastal Way, you can add a couple of extra days and enjoy some of these experiences in the area:

You can even continue your walk towards Finisterre after reaching Santiago, to discover the End of the World: 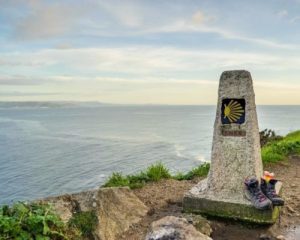 Please do not hesitate to contact us if you have any questions at all.

“We don’t travel to escape life but for life not to escape us”.