Do you know what are the main stages of the English Way? Let’s discover together the main points of interest of this route that, since the Middle Ages, allowed pilgrims from northern Europe to reach Galicia and undertake the Saint James Way to Santiago. In this post, we will investigate the history and the beauty of this alternative route that over the years is growing in number of pilgrims.

History of the English Way

The discovery of the tomb of the Apostle St. James around the year 814, was a decisive event for the development of this pilgrimage, as for all the other itineraries leading to Santiago de Compostela. Attracted to the Cathedral that housed the remains of the Saint, thousands of pilgrims from all over Europe began to travel what soon became the third most important pilgrimage route in the world, along with pilgrimages to Rome and Jerusalem.

Among the testimonies received of the importance of this route, we remember the pilgrimage of 1147. The battalion was composed by a crusading army of English, Germans and Flemish, who were going to fight in the Holy Land. Another extraordinary example was the journey on foot of the Icelandic monk Nicolás Bergsson who passed through Santiago between 1154 and 1159 before going to Rome. Moreover, we cannot forget that in 1434 more than 3.000 pilgrims arrived by boat in A Coruña.

This pilgrimage route suffered a strong decline in the sixteenth century with the breaking of relations between Henry VIII and the Catholic Church, leading to the almost total disappearance of the English way until modern times, when it was recovered. 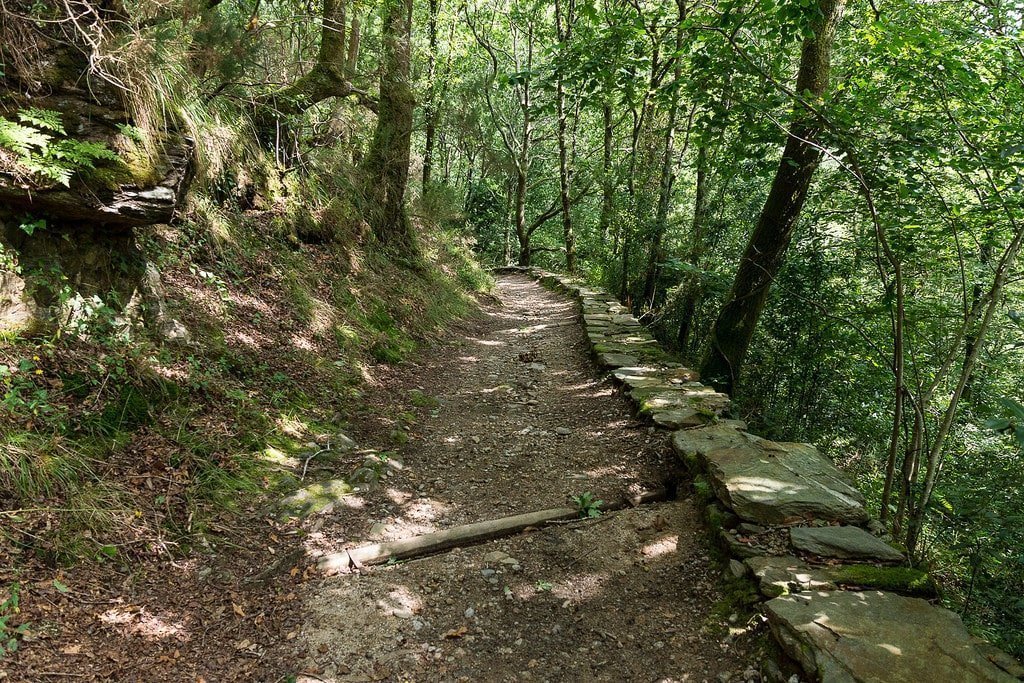 The English Way: from Ferrol or A Coruña?

To understand the origins of the English Way, first of all we must imagine medieval pilgrims arriving to the Galician coast after an arduous journey by sea. These pilgrims were mainly coming from Scandinavia, Holland, Northern France, England, Ireland and Scotland. Once reached the mainland, the two main starting points of the English route were the port of Ferrol or A Coruña and this has remained unchanged over the centuries.

Nowadays, if you want to receive the Compostela certificate, you have to walk the 122 kilometers that separate Ferrol from Santiago de Compostela. If, on the other hand, you decided to leave from A Coruña, you would only walk 78 km, less than the minimum required distance to obtain the certificate (100km). To know more about one of the historic monuments that you can find in A Coruña, do not miss this article about the Tower of Hercules and its history. If, finally, you want to travel this route by bike, you will not get the Compostela under any circumstances. In fact, a minimum distance of 200 km is required if you cycle the way. Both starting points are places of great historical interest with important monuments that take us back to a past full of magic and legend.

The English Way from Ferrol, can be completed in 5 stages with an average of 25 km / day but remember that with Galiwonders you do not need to worry! In fact, you can divide the stages in order to travel an easier version and enjoy the landscapes you will cross.

Most of the pilgrims begin their journey in Ferrol, precisely because of the desire to obtain the certificate of La Compostela on their arrival in Santiago. In the ancient medieval port of Ferrol Vello, built in the 11th century, we find the Km 0 of the path, where there is also the Tourist and Pilgrims’ Attention Office.

Thanks to its orographic configuration and the ría de Ferrol, this is one of the safest ports in the world. For this reason, in the 16th century, Felipe II decided that this would be the base of the Royal Army. Later, Felipe V had the Royal Arsenal built here and Fernando VI ordered the creation of a big shipyard that would be dedicated almost exclusively to the construction of ships for the Army.

In the past, the arsenal stored the largest shipyard and weapons reserve in Europe and today Ferrol is the place where the most important naval structures of the 18th century in the world are preserved. The arsenal was so protected that it was not possible to attack it until the arrival of the war by air. In order to access the arsenal, any boat had to enter by the Ferrol Ría, protected by the Castillo de San Felipe, the Castillo de la Palma and the Fortaleza de San Martín on both sides.

The arsenal, today the naval base of the army, is open to the public as an Asset of Cultural Interest. Also in Ferrol, we find the Shipbuilding Museum, the largest European museum dedicated to this theme, and the Naval Museum.

The first stage of the English Way from Ferrol ends in Pontedeume, a very characteristic fishing village and a place of strategic importance due to its geographical position. During your visit to the city, you can’t miss the medieval old town, and the Puente de Pedra, which for some time was the longest in Spain and had two towers and a hospital for pilgrims. Today none of these structures remain and with its current 15 arches, it replaced the old Gothic bridge built by Fernán Pérez de Andrade in the 14th century (with 68 arches). To this “Señor de Pontedeume”, called O Boo (The Good), were attributed the constructions of seven churches, seven monasteries, seven hospitals and seven bridges.

Moreover, in the historic center of Pontedeume, you can admire the Plaza do Conde, the remains of the old city wall and the Torreón de los Andrade which, with its 18 meters high, completed the enclosure of the defensive walls. Today, this is the location of the Tourist Office and the Interpretation Center of the Torreón de Andrade. Also not to be missed are the Church of St. James, the Chapel of St. Michael, the Church of Virtues and other buildings of historical interest.

From Pontedeume you can reach the beautiful beaches of the rías de Ares awarded with the blue flag and the Fragas do Eume, located a few kilometers away. This enchanted forest, part of the Natural Parks network since 1997, is a real hidden treasure. Undoubtedly, it will surprise you with its beauty and the presence of an intact forest dating back to the Tertiary Era. Considered the most important coastal Atlantic forest in Europe, it is worth a visit.

With its 9 thousand hectares of extension, along the river Eume, it represents one of the best preserved parks in Europe. In addition to presenting more than 200 different types of lichens and 20 types of ferns, it also offers an incredible wildlife biodiversity. These forests are home to more than 103 species of birds, 41 types of mammals and 8 species of fish.

But we are not only talking about flora and fauna. In the park you can also find historical buildings such as the Monastery of Caaveiro and the Monastery of Santa Maria de Montefero that seem to have been suspended in time. The first, built in the 9th century, was used as a refuge for monks and pilgrims until the 18th century and is considered the oldest monastery in Galicia. Lord Byron himself was impressed by this enchanted place. The Monastery of Santa Maria de Montefero, on the other hand, dates back to the 12th century and is located in the highest area.

The second stage will take you to the city of Betanzos, whose historic center has been declared a Historic-Artistic Site, for its great patrimonial value. Considered by many as one of the most beautiful cities in the province of A Coruña, this was one of the capitals of the Old Kingdom of Galicia and is also known as the city of the Knights for the importance of these figures in the Middle Ages.

Among the points of interest of Betanzos, we would like to mention: the Plaza Hermanos García Naveira, where we find the Fountain of Diana Cazadora (a copy of the sculpture “Diana de Versalles” exhibited at the Louvre Museum), the Convent of the Agustinas Recoletas, the Vella Bridge, the City Gates (rest of the old medieval wall), the Plaza de Fernán Pérez de Andrade, where we find the church of San Francisco (photo below), the Plaza de la Constitución and the church of Santa María de Azogue. Finally, a little outside we find the Park of the “Pasatiempo”, the first western theme park, which not only had a playful purpose but also a pedagogical one, being born as an encyclopedic park at the beginning of the 20th century.

Along your English route, do not forget to try the famous Betanzos tortilla and accompany it with a glass of one of the excellent Galician wines!

The next stages, will allow you to get to know the interior of Galicia and its rural landscapes. After leaving Betanzos, you will arrive in Bruma, where the two routes of the English Route, from A Coruña and Ferrol, meet. This area does not offer many services for the pilgrim, but in return it offers a good excuse to get time for self-awareness and to reflect on the meaning of the Way. In this section you can discover Roman chapels, small churches and medieval bridges. Don’t miss this moment of peace and quiet before entering the wonderful Santiago de Compostela and discovering its historical center, a UNESCO World Heritage Site.

Reasons to choose the English Way

This walk will allow you to enjoy a great variety of landscapes (sea, coast, woods, inner areas, historical cities, monuments). Also, you will be able to feel more peace than on other more popular routes. Nevertheless, we remind you that in 2019, according to the statistics of the Pilgrim’s Office of Santiago, the English Route was the fifth most chosen route with about 15,780 pilgrims. A good choice between the FrenchWay, first in the ranking among the routes walked in 2019 (almost 190,000 pilgrims) and the Winter Way, one of the last ones (with 1,035 pilgrims). To know all the numbers of the Way of Saint James in 2019, do not miss this post. Moreover, we would like to remind you that next year it will be Holy Year 2021 and many pilgrims are going to undertake one of the routes.

Like all the Caminos to Santiago, the English Way is unique and offers incredible places to discover. If you are a nature lover and do not want to walk a way that is too busy but not too lonely either, this route is a perfect option. Remember that there are many paths as pilgrims who walk them! And now that you know better the main points of interest along this itinerary, do you feel like taking the English Way test?

To know more about the main stages along the English Way or any of the other itineraries, do not hesitate to contact us. At Galiwonders, we are your local experts on the Way of Saint James.