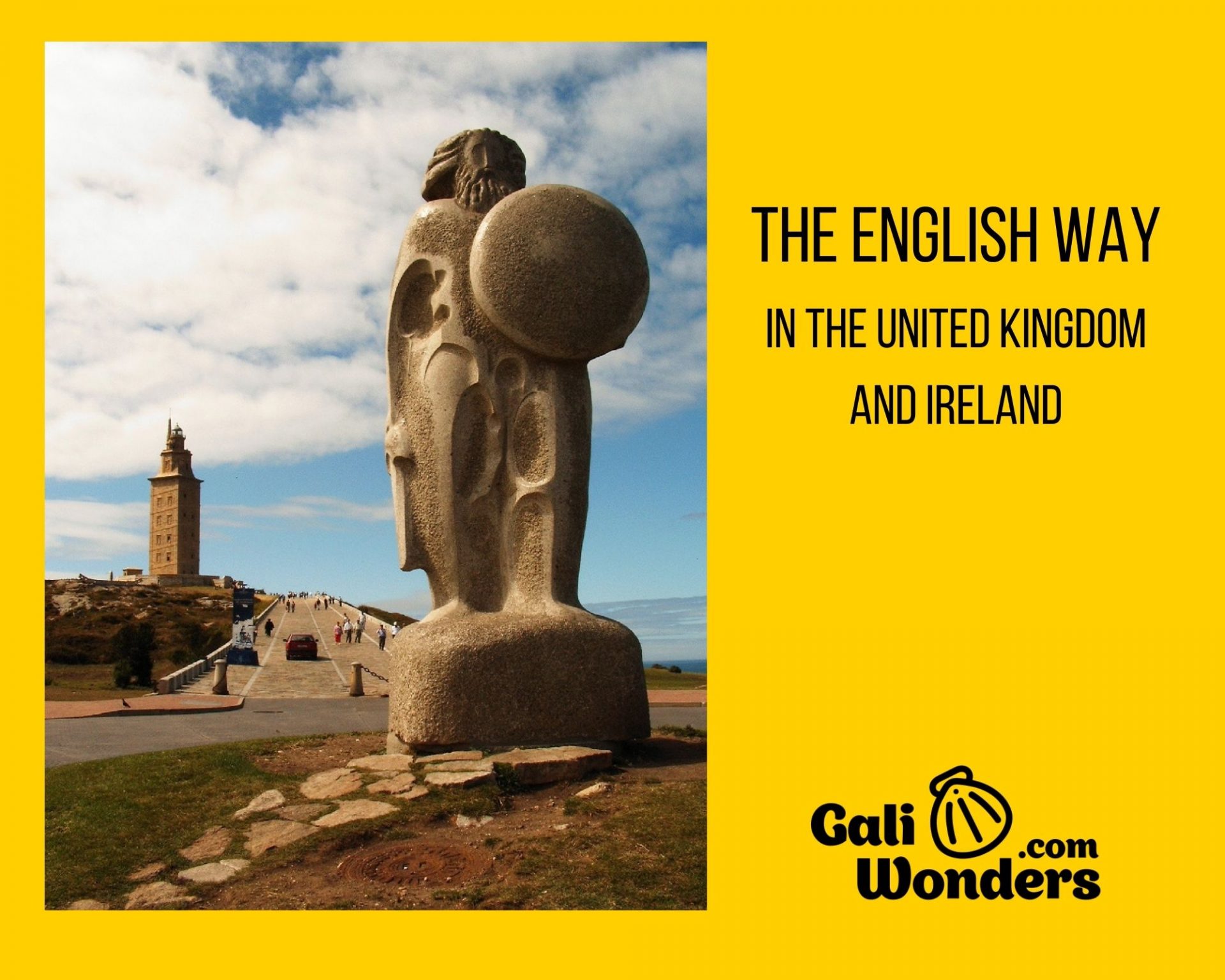 Did you know that there are many routes of the English Way in the United Kingdom and Ireland? These countries share a strong connection with Galicia and especially with the Way of St James.  Pilgrims have been coming from northern Europe, mostly from the Uk and Ireland, to the tomb of the apostle St. James for more than 800 years. Let’s find out together the historic roots of the English Way and the many routes pilgrims can walk on british and irish soil.

The origin of the English Way is located in the Middle Ages, when many devotees from England and other Northern or Eastern European countries (Denmark, Norway, Scotland, Ireland…), after a long journey (usually by boat) would disembark in the port of Ferrol or La Coruña, and from there they continued the Way to Santiago de Compostela.

The official starting point of this route is located in the county of Durham, at the Finchdale Abbey (near Scotland), that once was the meeting point of many pilgrims after crossing the Northern Sea.

The boat journey was very dangerous at the time but, once the pilgrims reached the mainland, they could count on the help of the many monasteries, pilgrims’ hospitals and religious orders on both English and Spanish territory.

Many distinguished personalities walked the English Way: the emperor Charles I of Spain and V of Germany, the duke of Lancaster and Cosimo de Medici, among others.

The English Way in the United Kingdom and Ireland

Nowadays, the Association of Town Councils of the English Way and the Provincial Council of La Coruña together with non-profit organisations such as the Confraternity of Saint James, in the United Kingdom or the Camino Society Ireland, are carrying out very important work for the revaluation of the routes walked by medieval pilgrims in these countries.  With this main goal in mind, among many other actions, guides were published, also many pilgrimage routes were officially recognized and marked with the famous yellow arrow and the scallop symbol.

The English Way in the United Kingdom: routes

The origin of the English Way is located in the county of Durham, in the northeast of England, very close to Scotland.

Here we can find the route “Finchale – Durham – Bishop Auckland”: the starting point is represented by the remains of the Finchdale Abbey, sited by the River Wear, a spectacular beginning of the Camino. From there, the walk is about 34 km following the yellow arrows until reaching Escomb’s Church.

The route passes through the historic city of Durham and its cathedral, declared World Heritage site by Unesco, where pilgrims can stamp their credential.

The route finds its end at Bishop Auckland, where pilgrims can visit its’ beautiful castles.

There are other official routes, popular between British pilgrims for their historic connection with the English Way. They are officially recognized and pilgrims can obtain stamps for their credential. Among them we can list:

The Saints’ Way, in Cornwall, which crosses central Cornwall from side to side, from Padstow Harbour to Fowey Harbour, where pilgrims can enjoy the beautiful Cornish countryside.

The Pilgrims’ Way, between London or Winchester and Canterbury, famous for its impressive cathedral.

The Way of St Andrews, a total of eight itineraries with different starting points of northern England and Scotland. The pilgrimage routes finalize in St. Andrews and its cathedral, place where the relics of the Patron of Scotland were kept.

Walsingham Way from Norwich to Walsingham.

The English Way in Ireland: routes

In Ireland, the Camino Society Ireland Association is the one in charge of recognising historical pilgrimage routes in their country. The main objective of this work is to create authentic itineraries in order to complete the 25 km needed before travelling to Spain and walk from La Coruña the remaining 75 kms to obtain the Compostela. This Camino is well known as Celtic Camino or Camino Celta.

Some of the most popular and scenic routes on the Irish mainland are:

Croagh Patrick Heritage Trail situated in the County Mayo (west of Ireland), starts in Balla and reaches the foot of the famous mountain Croagh Patrick en Murrisk. The itinerary is about 63km in total.

Tóchar Phádraig in the County Mayo, a 35 km coastal trail from Ballintubber Abbey to the holy mountain of Croagh Patrick.

Boyne Valley Camino It is a circular trail of 25 km which starts in Drogheda and passes through Townley Hall, Melifont Abbey and Belnumber Wood.

St Kevin’s Way you can either choose to start in Hollywood (Ireland) or in Valleymount. The route is about 30 km, following the steps of St Kevin, up to Glendalough where pilgrims can visit the ruins of the old monastery.

St Finbarr’s Pilgrim Path  this trail starts from Drimoleague in the Kealkill area and ends in Gougane Barra. It is around 42 kms long and follows the steps of St. Finbarr (VI century).

Kerry Camino  57 km from Tralee to Dingle, passing through Camp and Annascaul in the Kerry County.

St Declan’s Way  It follows the path walked by St. Declan to meet St. Patrick in the 5th century. This is the longest route in Ireland, about 100 km starting from Cashel, Tipperary County, and ending in Ardmore in the Waterford County.

Slí ár Sinsear – The Ancestors’ Way a 29 km trail, from Glenbeigh to Cahersiveen, in the Kerry County. It follows ancient paths of the Drung Reign of the time of the Milesians who came to Ireland from Galicia.

The English Way in the United Kingdom and Ireland: The Compostela

The kilometres walked in United Kingdom or Ireland, on the official routes, if accredited by the stamps on the credential, count for the attainment of the Compostela when the Camino Inglés is completed from the city of La Coruña.

In the case of walking in Ireland, pilgrims would need to stamp the credential during the Camino. Later, the Camino Society will verify the route completed and release a “Celtic Camino Compostela”. This certificate, would be an official proof to be presented at the Pilgrim’s office in Santiago once the pilgrim completes the remaining 75 km from La Coruña in order to obtain the Compostela.

Would you like to walk the English Way? At Galiwonders we will help you create a lifetime experience. We will work on the best itinerary, adapted to your needs.