In this post, we will tell you about some of the most beautiful cities that you can cross along the French Way. Discover with us some curiosities about these wonderful places and get ready to enjoy them, by booking your way to Santiago with Galiwonders. We remind you that 2021 will be the Jacobean Holy Year. Do not miss this opportunity to experience the Way during the Jubilee!

The most beautiful cities along the French Way

All the Ways that lead to Santiago de Compostela are wonderful and fascinating, each for a particular motivation. Along the Portuguese Coastal Route, we can admire the Atlantic Ocean, and on the Winter Route, the beautiful Ribeira Sacra and the mountains of the area. Moreover, along the French Route we can discover some of the most important cities, from a historical-artistic point of view, of the whole Iberian Peninsula.

Let’s see some of the most characteristic ones!

Many people know Pamplona for the famous Festival of the Sanfermines, which gained its international fame thanks to the Nobel Prize for Literature Ernest Hemingway. It began as a celebration in honor of the Saint Fermin. The first news dates back to 1186, when the Saint’s remains were moved from France to Pamplona. Later on, this religious celebration grew in popular culture, with the livestock and the bulls performing. Each year thousands of people participate in this famous festival.

“I can never do more than Pamplona has done for me”. Ernest Hemingway, 1953

But don’t get wrong, this extraordinary city has a lot to offer besides its famous festival. For example, we must not forget its wall, which has more than 5 km of extension and has been declared a National Monument. Its historic center, formed by the three areas of Navarrería, San Cernin and San Nicolás, is of medieval origin. Here, we find the Cathedral of Santa Maria la Real, of Gothic style (ss. XIV-XVI). Its name is due to the fact that the royal coronations took place here. The gothic claustro stands out, as one of the best in Europe, which together with the architectural complex, makes this Cathedral one of the most famous in the country. 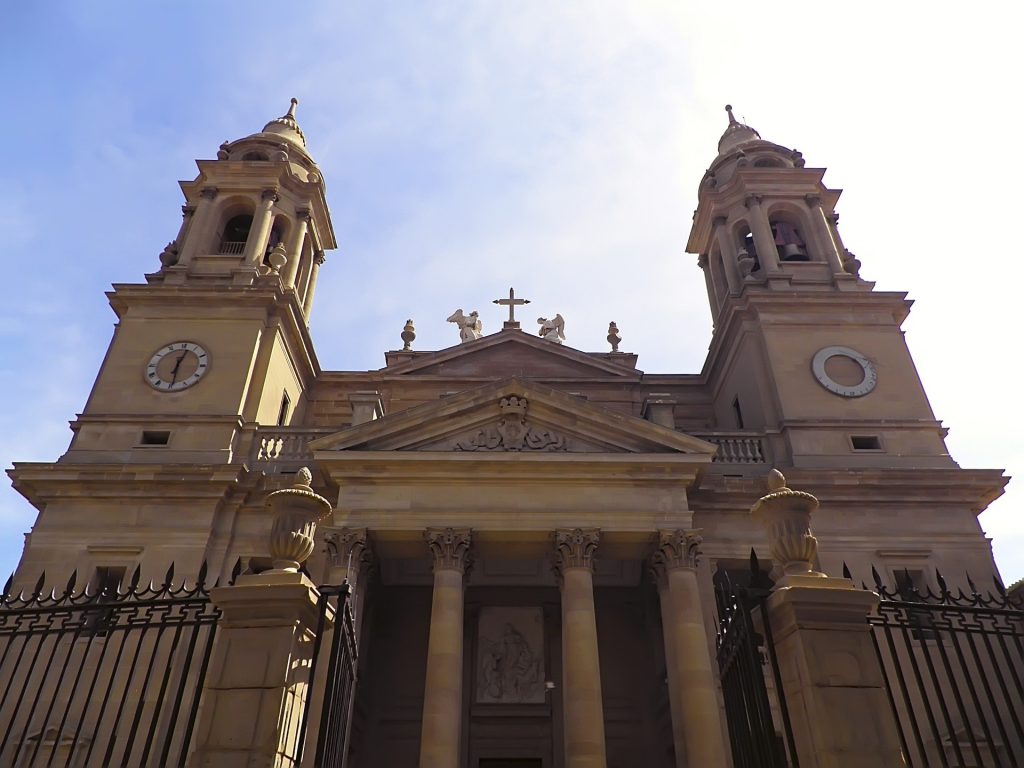 Puente de la Reina owes its name to the 11th century Romanesque bridge over the river Arga, considered one of the most interesting examples of civil architecture on the Pilgrim’s Way to Santiago. By many it is even considered the most beautiful bridge of all the Ways of Saint James. It seems that it was built on the initiative of a queen (or Mrs. Mayor of Castilla, wife of Sancho el Mayor, or Mrs. Estefanía, wife of García Nájera) to facilitate the exit of pilgrims from the city.

This elegant bridge with a simple style, initially had 3 defensive towers. In the central tower there was the image of the Virgin of Puy or Txori. Nowadays this figure can be found in the Church of San Pedro, where it was moved in 1843.

Both these churches, one located near the river, and the church of Santiago el Mayor (which has a Gothic image of the Apostle Santiago) are worth a visit. 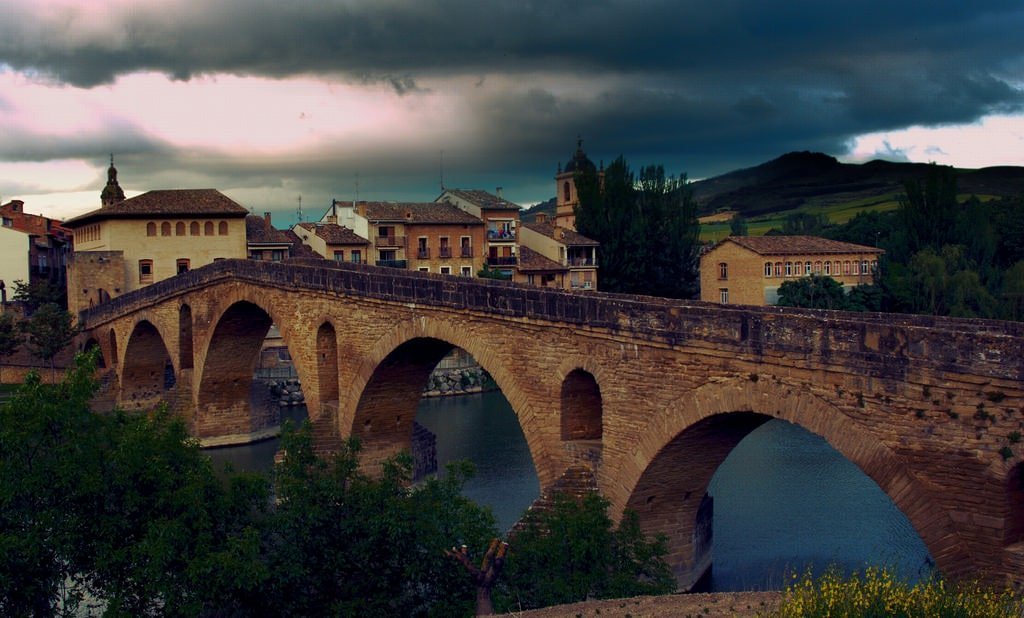 Spain’s first commercial city, Logroño, on the river Ebro, is undoubtedly worth a visit to its beautiful historic center. Being in an area with a continental climate, it is important to be prepared for the thermal excursions of this area (very hot in summer and cold in winter).

Along your French Route, this is a must and you can’t miss the Espolón promenade (with an ecuestrian monument in Espartero), the Co-cathedral of Santa María de La Redonda (with baroque twin towers), the Convent de la Merced which is currently the location of the Regional Parliament; the Portales street and the Church of Santiago El Real.

This is a place of reference for its eno-gastronomy (it was declared Spanish Gastronomic Capital in 2012).

The medieval town of Burgos is best known for its wonderful Cathedral, declared a World Heritage Site by UNESCO in 1984. One of the most important monuments of European Gothic art, this cathedral was built on the initiative of Bishop Don Mauricio in 1221. Another important church is that of San Nicolás.

The city of Burgos, initially founded as a military village, was converted in the Middle Ages into a commercial point of great economic importance, especially as a reference point for the merino wool trade. Some of the typical houses also stand out, such as the Cordon House, where the Catholic Kings received Christopher Columbus on his return from his second trip to America.

Burgos is another city along the French Route that will offer you delicious gastronomic specialties of the local tradition. Do not miss the typical dishes including: legumes, sausages, milk lamb meat cooked in a wood oven, marinated trout or cod stew. Typical of the area are also the yemas (sweets made with egg yolk and sugar). Obviously we cannot forget the famous wines of Denomination of Controlled Origin of the Ribera del Duero. 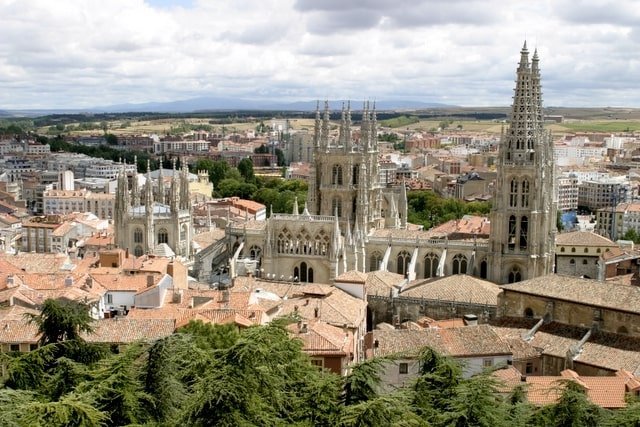 Léon is undoubtedly a 360º city. It offers a unique example of architecture, history, gastronomy, natural landscapes (The Medulas are World Heritage Site) and culture. Of Roman foundation, this city presents a mixed heritage of Romanesque, Gothic with Arabic and Renaissance influences.

Among the monuments not to be missed during a visit to the city are the church of San Salvador in Palat del Rey, the oldest in the city, the Palace of Count Luna, now an exhibition hall, the Palace of the Guzmanes and the House of Botines, designed by the architect Antonio Gaudí, the church of the Virgin of the Way (an image linked to the Way of St. James and much venerated in the city).

Without doubt, among the monuments that stand out the most are the Cathedral and the Basilica of San Isidoro. This impressive Gothic cathedral, one of the most majestic in Spain, stands on ancient Roman baths and has 1,800 square meters of stained glass windows! We do suggest you also a visit to the Cathedrals Museum, which will allow to visit the cloister and a plateresque staircase.

The Basilica of San Isidoro is considered one of the most emblematic buildings in Europe. Not by chance, here is kept what has been called the “Sistine Chapel” of the Spanish Romanesque whose frescoes of the twelfth century, are still in a state of perfect preservation.

This city is a common stop on two distinct routes of the Pilgrim’s Way to Santiago, the French Way and the Via de la Plata (Silver Route). The latter, which dates back to Roman times, was a famous commercial route that transported the metals extracted in the mines of the north, to the trade routes of the south.

This town has Romanesque ruins, including remains of thermal baths and ancient residences, as well as a rich medieval tradition. Inside the walls, we find buildings of immense architectural value, including the Episcopal Palace, built by the architect Gaudi, now home to the Pilgrimage Museum. The beautiful Cathedral, built from the fifteenth to the seventeenth centuries, has elements of Gothic, Renaissance and Baroque style.

As for the other cities already mentioned in this autonomous community, you cannot miss the typical dishes and local wines! 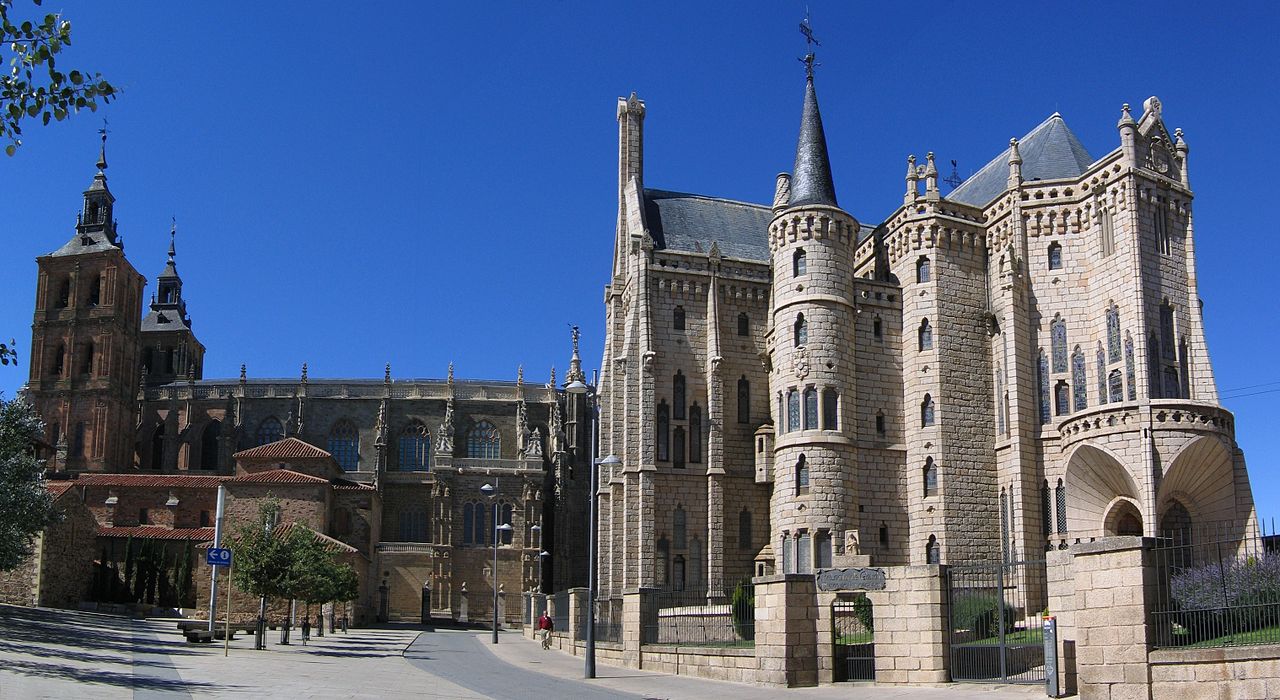 This city, founded by the Romans, owes its name Pons Ferrada to the construction of a solid bridge with iron reinforcements. Ponferrada, is a typical stage to begin the French route by bicycle (it has the 200 km distance from Santiago necessary to get the Compostela by bike).

This city is also famous for its beautiful Templar Castle.

It was precisely to the Order of the Templars that King Fernando II of León entrusted the protection of the city in 1178, and this led to a demographic and commercial development of the area. The Castle, whose construction began at the end of the 12th century, stands in the heart of the city, on the river Sil.

Discovering the historical center of the city, you will meet the Clock Tower (16th century) and the Convent of Madres Concepcionistas (second half of the 16th century). In Encina Square, we will find one of the most famous Renaissance buildings in Ponferrada, the Basilica of the Encina, from 1573. Continuing our visit, we will find the Hospital de la Reina, the baroque church of San Andrés and the Bierzo Museum, in the old prison.

As always at Galiwonders, we recommend you to not miss the culinary delights of the area, including the botillo, a marinated and smoked sausage accompanied with cachelos (boiled potatoes) and vegetables, and the wine of Denomination of Origin. 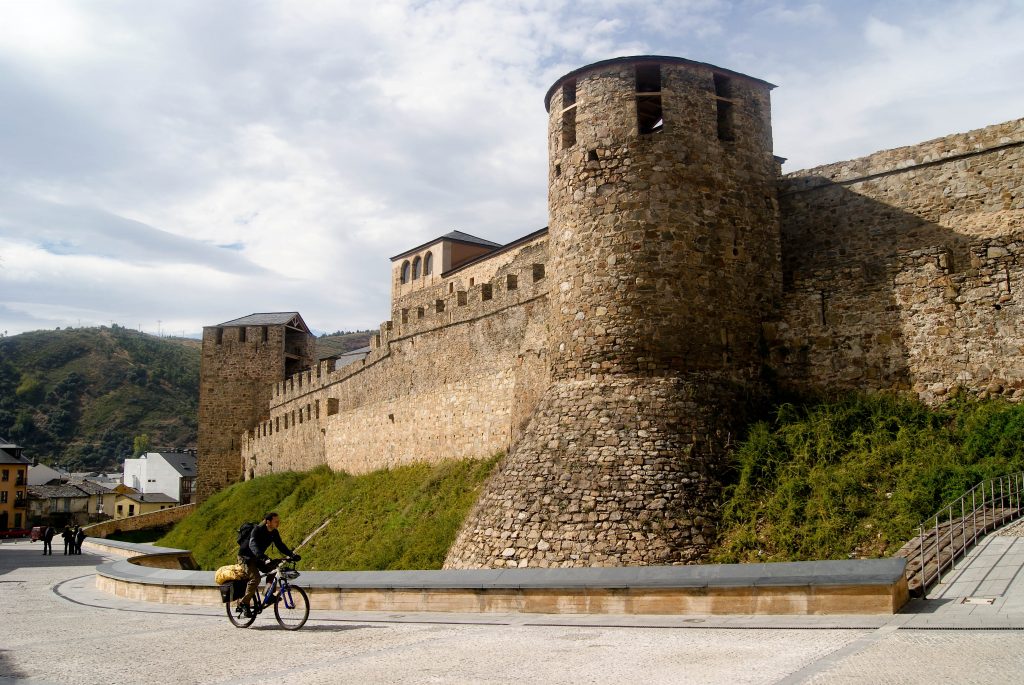 In this case we are not talking about a city, but rather of a small mountain village. This is the first stage of the French Way located in the Galician community and is often chosen by pilgrims as a starting point for their journey. In this place are still preserved, the pallozas, stone typical buildings with thatched roofs, inhabited until recently. A part of these buildings has been converted into rural tourism facilities and an ethnological museum.

Not to be missed are the pre-Romanesque church of O Cebreiro, the oldest on the French Way, which contains a Holy Grail and the guesthouse of San Giraldo de Aurillac, in operation since the 9th century!

A curiosity: The church bells helped pilgrims to find their way through the fog in winter. O Cebreiro is a place that maintains a strong continuity with its past and traditions and that will leave you a pleasant memory of the journey! 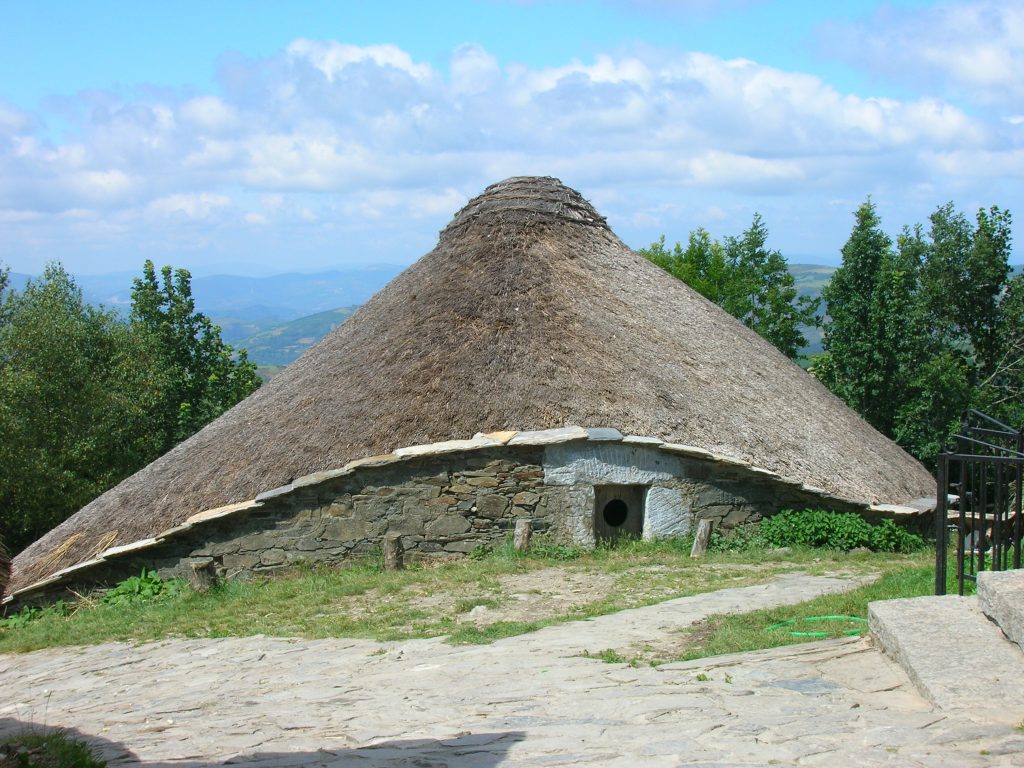 The city symbol of all paths, Santiago de Compostela is the final destination of any itinerary, except for the Way to Finisterre which, on the contrary, starts right here. In the emblematic square of the Pilgrim’s Way, Plaza del Obradoiro, is where we find the famous Cathedral. Inside the Cathedral, according to tradition, are preserved the relics of the Apostle St. James.

In Plaza del Obradoiro, in addition to the Cathedral, there are also the Palace of Raxoi and the Parador de los Reyes Católicos, considered by some the oldest hotel in the world. Here it is frequent to meet a multitude of pilgrims who recover their strength by sitting in the center of the square and celebrating the end of their journey.

Let’s not forget that the historic center of Santiago de Compostela was declared a World Heritage Site in 1985. Its narrow streets, squares and monuments are certainly worth a visit, including the Plaza de Praterías, the Plaza de Quintana, the Franco and Raiña streets, the Monastery of San Martiño Pinario, the Alameda Park and the Monte do Gozo viewpoint.

Among the delicacies to try are of course the octopus “a feira”, scallops and other seafood, the cake of Santiago or local wines such as Albariño or Mencía.

In Galiwonders, we are passionate about all the routes of Saint James and we believe that every route has an unmistakable charm. If you are interested in one of the routes ending in Santiago de Compostela, do not hesitate to contact us!