Tastes of the Camino: the recipe book

If you are looking to bring back home all the gastronomy of the Camino de Santiago, here you have Tastes of the Camino, written by Yosmar Monique Martinez.

Today we are interviewing Yosmar Monique Martinez. As a publisher and culinary instructor, she states that anyone could create a memorable meal with the correct ingredients and guidance. She has always been fascinated by gastronomy with an open mind, as she lived in four different countries. In fact, this passion lead hear to study at the prestigious culinary school Le Cordon Bleu, in Paris. This was just the beginning of 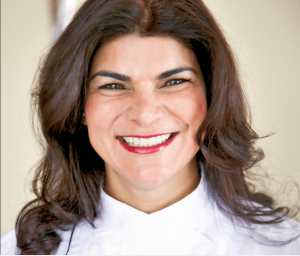 her large professional experience in gastronomy, that she likes to combine with travels.

And this is how she became familiar with the Camino de Santiago and the origin of her cookbook: Tastes of the Camino. Let’s learn a bit more about her experience.

-How many times have you walked the Camino de Santiago, and which routes did you choose?

I’ve walked the Camino four times, twice from Saint Jean Pied de Port, once from Porto and once from the Sanabrés.  The first three times I walked with my mother, who was 69, 71 and 72 years old.  The last time I walked with a good friend.

-How was your experience with the “Menú del Peregrino“?

-What motivated to write a book about food on the Camino de Santiago?

I have culinary training and a passion for food!  So anytime I travel I like to learn about the foods of a country and make them at home.  In addition, I have Spanish heritage, so it was lovely to learn more about foods I often took for granted.  When I got back to the United States, all my pilgrim friends would ask if had a recipe for one dish or another.  Therefore, I decided to write a cookbook. As I was not doing this full time, it took me two years to develop the recipes, test them and write the manuscript.  Then it took me another 10 months to produce the book.  I self-published the book which meant I had to learn everything.  It was a lot of work but it was an amazing experience from which I learned and grew a lot.

-Is Spanish gastronomy popular in your country?

Spanish gastronomy has grown a lot in popularity in the United States in the last 15-20 years and the concept of tapas has spread to other types of cuisines as well.

-Which are your favorite Spanish dishes? 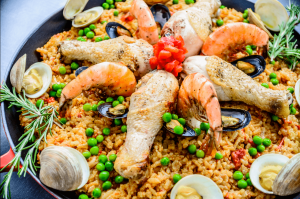 It is really hard to pick only three but I would say:

-Any restaurant you can recommend on the Camino de Santiago?

Along the Camino de Santiago, there were many bars and restaurants that I enjoyed.  Some were simple and others were a bit more upscale. But here are some that were really nice: 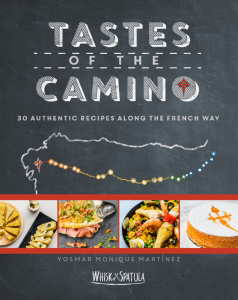 Hotel Akerreta in Akerreta (I think they only serve overnight guests) 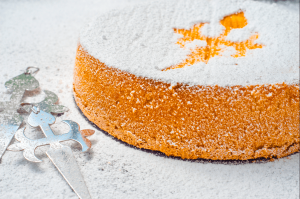 In Santiago, I like Taberna do Bispo and Maria Castaña for a simple, casual meal.  For a bit refined, I like San Clemente, O Dezesseis, and Casa Marcelo.  I also love the mercado de Abastos!

Finally, in Negreira, I really enjoy Casa O Barqueiro… the food is phenomenal!

-What will readers find on your book that is different to any other cookbook?

Tastes of the Camino is different from other cookbooks in the sense that it is not organized by type of course.  Rather it is laid out in the order which I travelled.  So the first couple of recipes were recipes from the French Basques country, the next ones were from Navarra, followed by Rioja, Castilla y Leon, and Galicia. By laying out the book in this order, I was able to take the readers with me on my Camino while giving them a gastronomical insight into reach region I walked through.

The book, Tastes of the Camino is available on Amazon and the author’s website:  www.whiskandspatula.com/books.  Books purchased on her website come signed by the author.