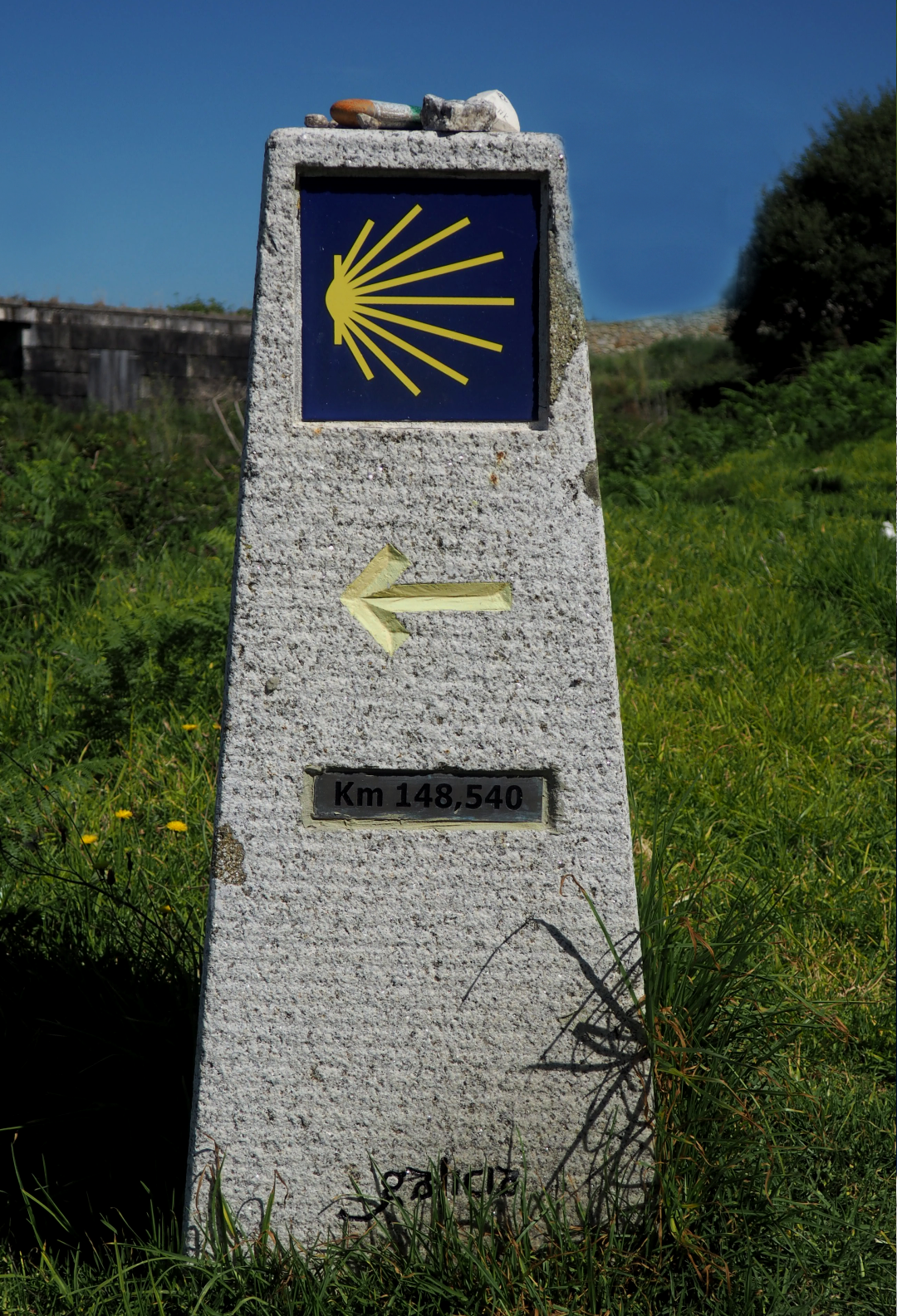 Those who have done the Camino at this point will not be surprised by the number of symbols and icons that we find on our way to Santiago de Compostela. Shells, arrows, cairns …. Everything has its meaning and in this week’s blog we want to delve into the wonderful infrastructure of signs that will accompany you at all times, from the beginning to the end of the Camino de Santiago. 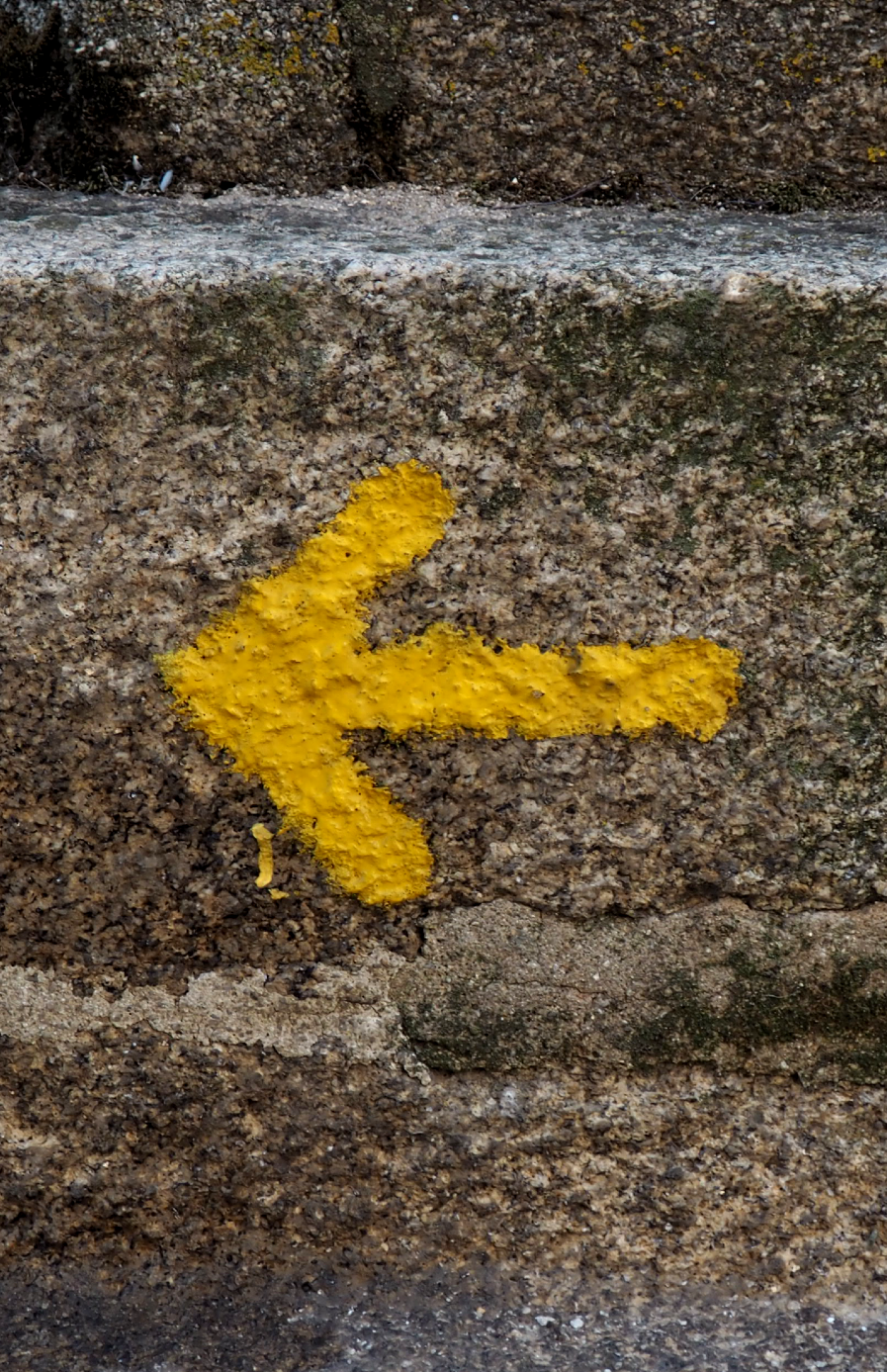 Hands up who has seen a yellow arrow and has not immediately thought of the Camino de Santiago. On the road, on a wall, even on trees, they are -without a doubt- the most recognizable and the most replicated sign of the Camino. And curiously, this symbol comes from a popular movement initiated by Father Elías Valiña, known as o cura do Cebreiro, a native of Sarria and promoter of the signaling of the French Way. He dedicated his life to travel this route, from France to Santiago, signaling the most lost detours of this variant and making popularly known what we know today as the most famous of the Xacobean routes. But why yellow, you may ask? Legend has it that it was a donation of paint that was made to Father Valiña and his group of volunteers from the surplus that was used at the time to delimit the roads.

And his work does not end with the arrows: he dedicated part of his years to writing about the Camino de Santiago and the origin of the pilgrimage so that it would later be recognized for what it is: one of the greatest migratory phenomena in the history of mankind.

Today you can find them in the form of graffiti, laminated on wood or accompanied by the famous yellow shell on the cairns or milestones that you will find along the routes. Many of them are far from being the traditional ones that Father Valiña himself painted on his route along the Camino, and both pilgrims and local governments have put their hands to work to improve the signage not only of the French route but of all those whose destination is the city of stars. 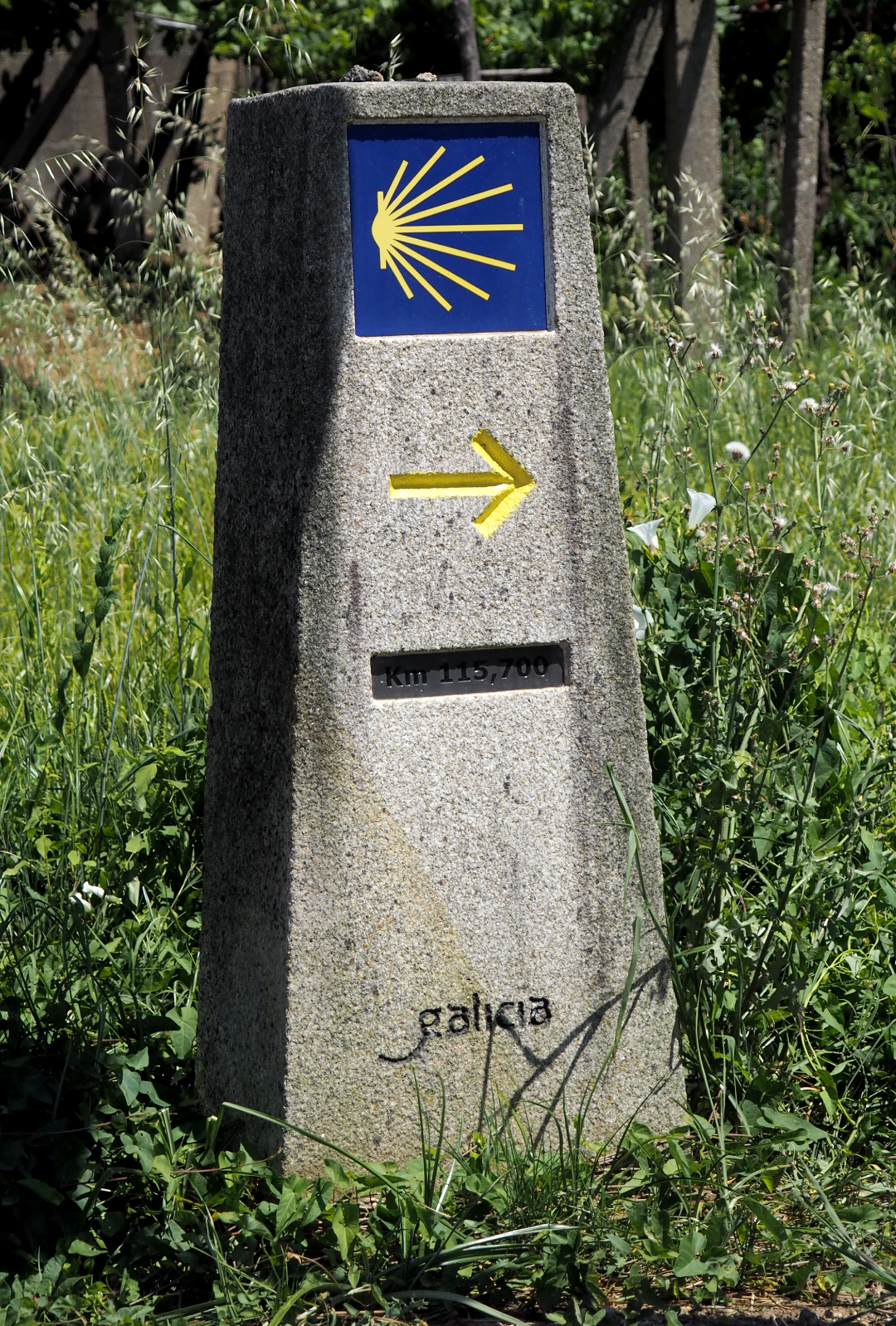 Cairns are perhaps the second most important element, not only because they accompany us and identify the route, but also because they symbolize the distance between our pilgrimage and our final destination. The milestones can be found from the most distant beginnings of the Camino in France, but they are more common and better marked within the Community of Galicia, where since 1997 they were positioned every 500 meters as a measure to improve the signaling of the pilgrimage routes.

Their design was recently altered within each community, with the final version showing the iconic shell and yellow arrow of the Camino, as well as signaling the distance separating our location from our final destination. Some still prefer the old version, made of granite stone and without many frills that made them blend in perfectly with the rural environment of the routes.

The shell of the Camino de Santiago usually has two symbolic representations, and both have a different meaning and origin. While the classic yellow shell that we see on facades or roads is usually accompanied by a yellow arrow indicating the direction to follow, the scallop shell has a much older origin and is rooted in old traditions. 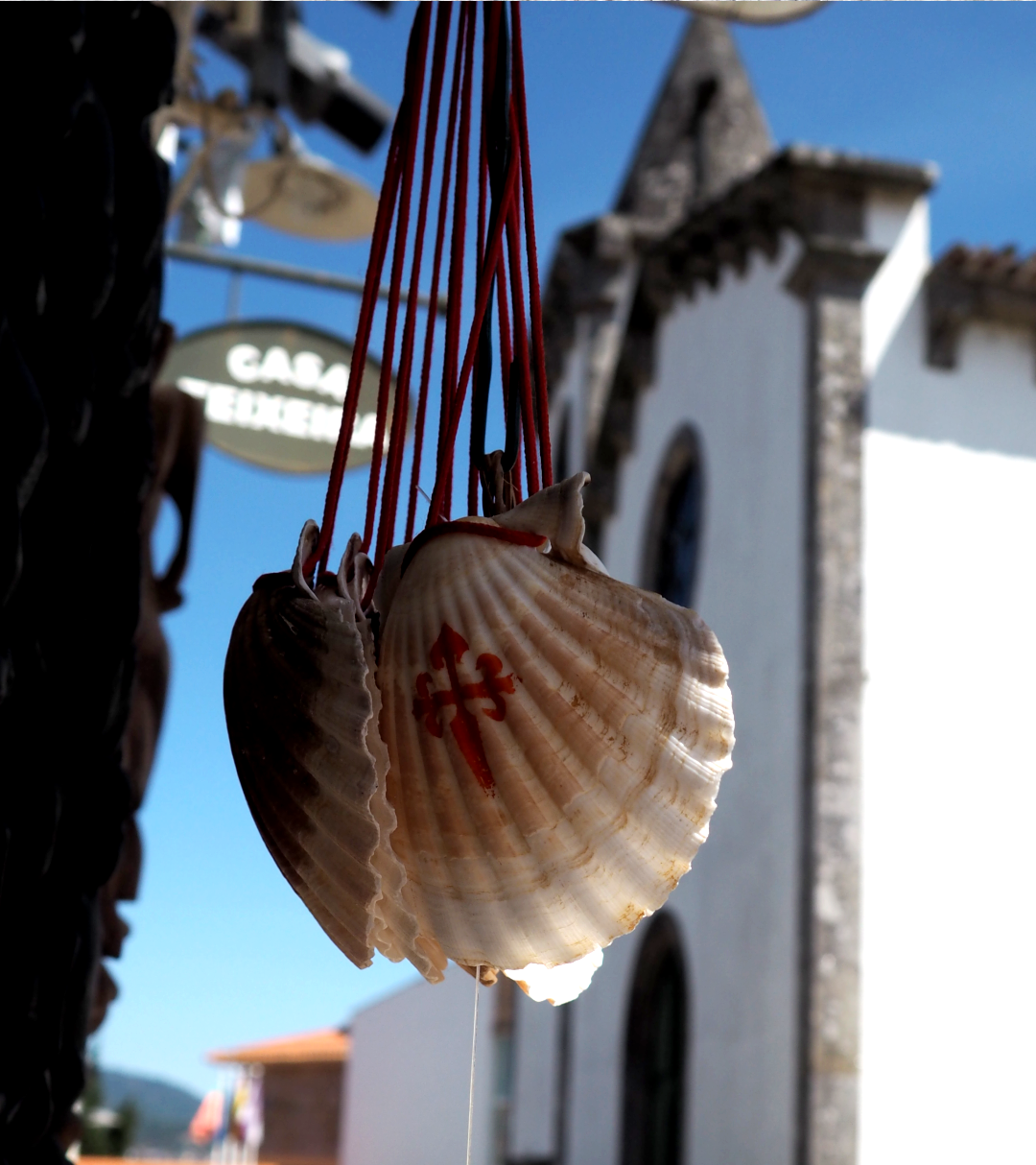 The scallop shell was once a gift received by pilgrims for having completed their pilgrimage. They were times when the pilgrimage was made exclusively for religious beliefs and those who gave them as gifts were members of the religious clergy. In addition, there is a belief, supported by studies, that the sale of scallop shells -or as they were known from the popularity of the Camino, conchas de Santiago- was forbidden for many years so as not to mislead those “pilgrims” who claimed to have completed their pilgrimage to Santiago de Compostela.

It is also believed to have had more convenient uses, such as using it to drink from the various fountains you can find along the Camino, or to share wine in other times when the pilgrim community would gather around a fire to spread stories and legends. In fact, you can still find a fountain, that of Irache, where you can fill it with both wine and water in a totally altruistic way. 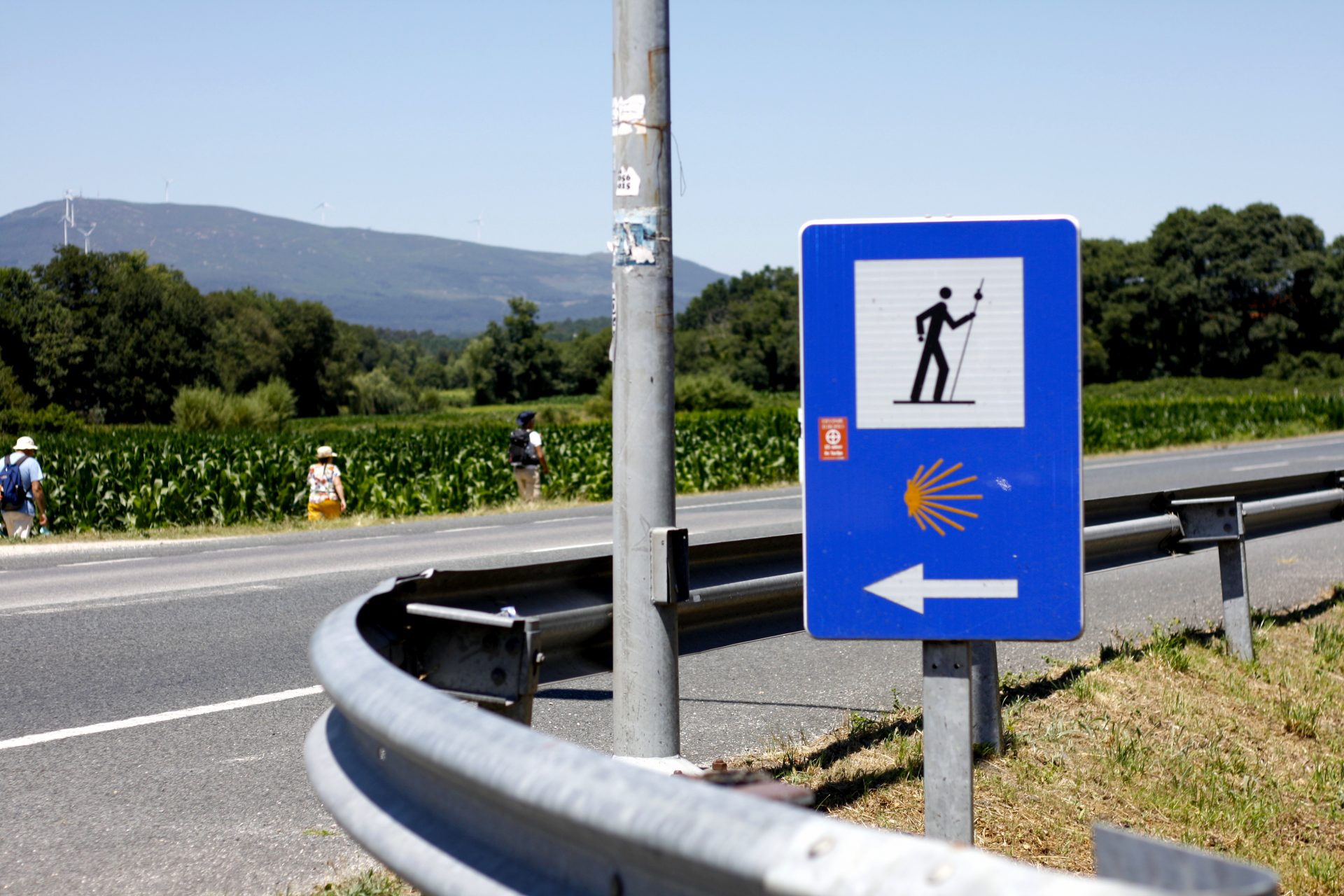 It is essential to point out that many of the routes, not only the French Way, intersect with local and national roads, and some even cross the occasional highway. It is not surprising then that, as far as precautions are concerned, the Camino is well signposted. It is clear that there are certain more popular routes, such as the French, where, as a rule, there are signs of all kinds every 500 meters. However, we can find that signage is scarce, absent or even confusing on other routes, but this is not the norm. Hence the importance of signposts and information panels that indicate to pilgrims, drivers and pedestrians what kind of regulations we must follow with respect to our safety. 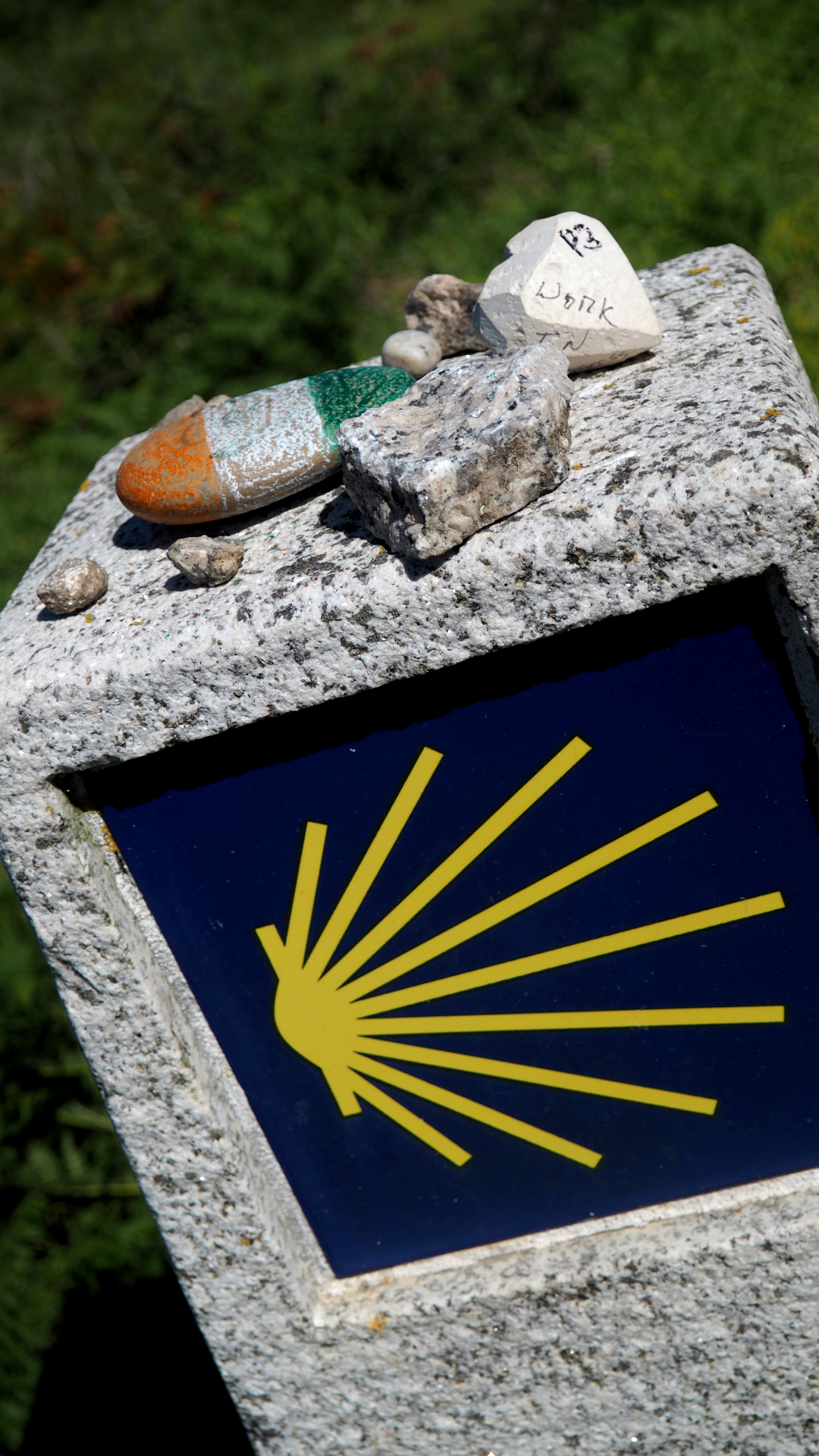 It is believed that this tradition has its origin in the generosity of the pilgrim community, which knows no limits. In the past, stones were left on the Camino to signal to the pilgrims coming behind that they were on the correct route.

Nowadays, it is very common to find stones -simple, decorated, with messages- on top of milestones or cairns. Although it began as a symbolic way of leaving our sins and regrets behind -like the one who releases the load of a heavy backpack- nowadays it is an icon of encouragement and hope to all those who see them, and it is very common to leave your own stone to mark your passage along the route.

Have you ever left stones on your way to a milestone? What is the most curious stone you have seen so far, pilgrim?

We hope you enjoyed this short but entertaining article and that you can tell us in comments if you know any other symbol or icon of the Camino de Santiago that we have not mentioned so far.