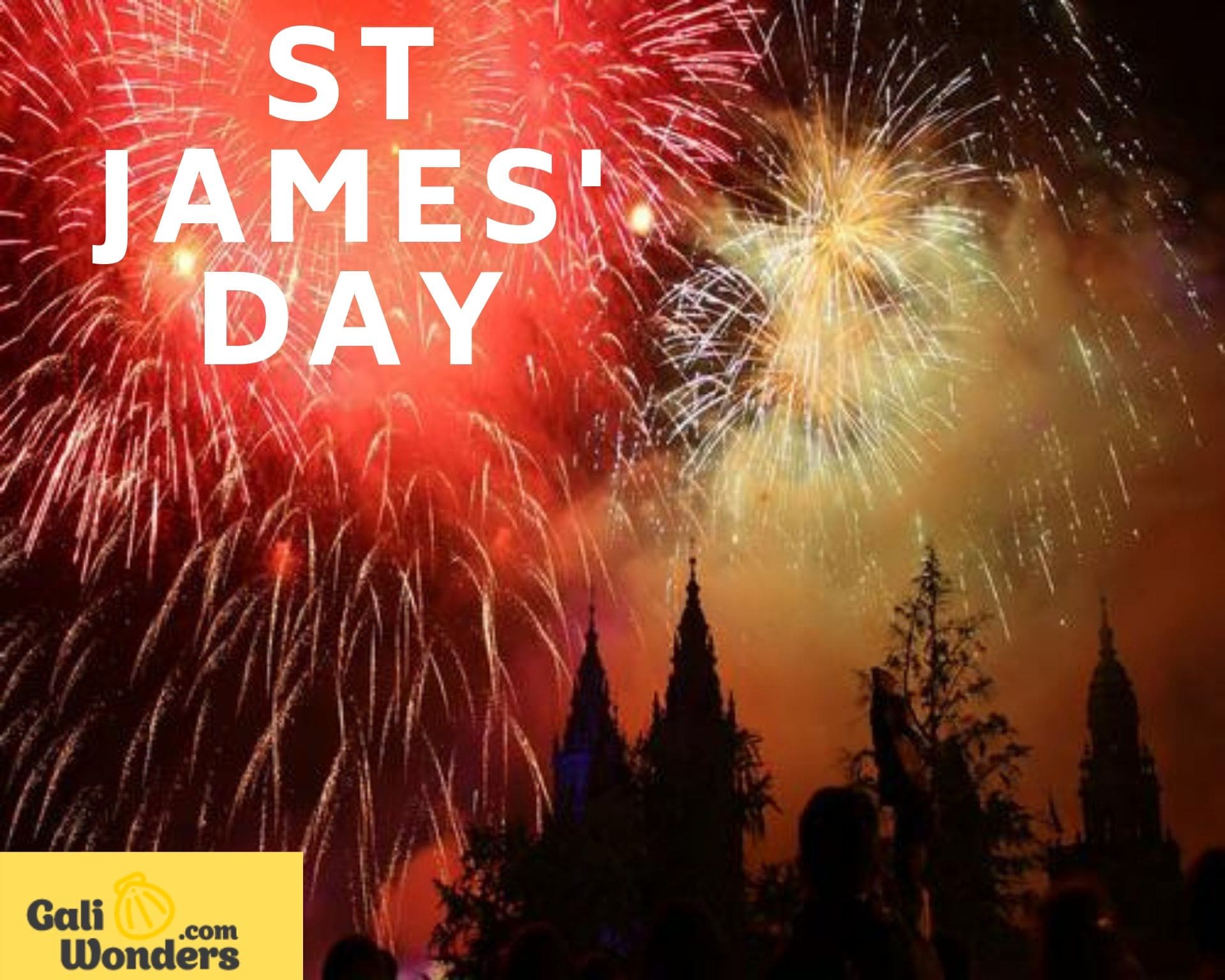 The 25th of July marks Santiago de Compostela’s biggest day: St James’ Day, the day in which the city honors the Apostle. It is also the National Day of Galicia, and therefore a local holiday.

Are you planning to visit Santiago de Compostela during the second half of July? Are you curious about what you will find at the end of your Camino? Here’s all you need to know about St James’ Day!

Who was St James?

According to the Bible, James was the son of Zebedee and Salome, and the older brother of John the Apostle. His English name, James, comes from the hebrew Ya’akov. Santiago, the Spanish name for the Apostle, stems from Latin ‘Sanctus Iacobus’ (Saint James). To distinguish him from James, son of Alphaeus, he is also called James the Greater.

The Apostle in Spain

The Saint preached the gospel in the Iberian Peninsula, and after his martyrdom his body was carried by sea and landed in the coast of Galicia, from where it was taken to be buried at Santiago de Compostela.

Since the 17th century, St James has been the Patron Saint of Spain. From 1630, Spaniards celebrate the Apostle’s Day each 25th of July. However, this is not the earliest celebration. From as early on as 1122, the date when the last stone of the Romanesque Cathedral was laid, each time St James’ Day is on a Sunday, a Holy Year takes place in Santiago de Compostela.

All pilgrims can receive pardons and blessings if they arrive in Compostela during the aforementioned year. The next Jubilee Year will be in 2021, and many pilgrims are expected to come!

And here’s a little fun fact: many Spanish, Galician and Portuguese given names come from the name of the Apostle! Jacobo, Jacob, Jaime, Iago, Yago, Diego, Diogo, Tiago and, of course, Santiago. In English, we can find the variants Jacob or James, and Séamus, Séamas in Irish Gaelic.

In 1919, Galician nationalists decided to celebrate the National Day on the 25th of July, starting the following year. The date was chosen in honor of St James, patron saint of Galicia and Compostela.

Although, the celebrations were halted during the Franco regime. Thus, they did not allow non-Spanish nationalism to be displayed. Galicians abroad would gather and celebrate on this day, and some local Galician nationalists would offer a highly symbolic Mass for renowned Galician poet Rosalía de Castro. Nonetheless, since St James was the patron saint of Spain, there were religious celebrations during this era.

The celebration of St James’ day

Nowadays, the celebrations take place during the second half of July, from the 15th until the end of the month. There is a mixture of religious and secular events, and a special focus on music and Galician traditions. The city of Santiago is buzzing with life on the days of the celebrations.

What are the big days?

The key dates of St James’ celebration are the night of the 24th and the day of the 25th of July. On the 24th, there is a fireworks show to honor the Apostle, with the Cathedral at the center of the spectacle. This pyrotechnics show can be seen from Obradoiro or from other strategic points in the city.

But if you can’t make it to Santiago for the big day, don’t worry: on the 31st of July the festivities will end with another fireworks spectacle! 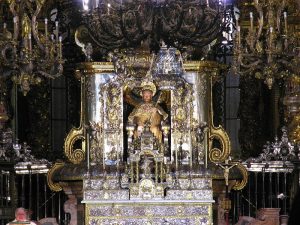 First, on the morning of the 25th, a Mass will take place in the Cathedral. During the Mass, the King or a delegate of the Royal Family makes a traditional offering to the Apostle. This mass is also a perfect opportunity to see the botafumeiro in action. The botafumeiro is a silver censer that hangs from the Cathedral’s ceiling, one of the largest in the world! It is only used in marked occasions, so if you want to see it for free, the 25th of July is your chance!

Do keep in mind that since this is a local holiday, many businesses will close on the 25th.

The rest of the month

As always, music will be a big part of the secular celebration, but there will also be dancing, theater and parades. You will be able to find shows by local bands all around the city, and there will be music to suit everyone’s taste. Keep your eye on Alameda, Praza de Cervantes, Praza do Toural or Praza da Quintana if you want to see any of these shows.

For this year, we have selected for your the following events but there is much more!

However, if you are a fun of the electronic music you can’t miss the ‘II Festival de música electrónica’ in Praza da Quintana (Quintana Square) at 10.00 pm.

More concerts will be celebrate on the second part of July and we have listed here some of them:

Therefore, you can’t miss the opportunity to explore the real folklore during the Galician Costume day (Día do Traxe Galego).

This 20th July at 7.30 pm enjoy the Parade of traditional costumes from Bonaval to Plaza Quintana and the 27 July at 9.30 pm there will be the Xornadas de Folclore Galego in the same square.

How about traditional games?

There will be a Chave Tournament, too. Chave is a Galician popular game in which the participants must throw disks to hit a metal piece, the chave.

On the 20th July you can assist to the XLI Torneo de chave Festas do Apóstolo’ at Parque da Alameda next to Santa Susana Children’s School.

At 5:00 pm will start the Great female and male final, don’t miss it!

Moreover, the parades of cabezudos are also an iconic part of the holiday: gigantes y cabezudos, or “giants and big-heads” are dolls that represent stereotypical characters. This tradition dates back to the Middle Ages, but it is still very much alive!

You can see these amazing giants starting from Praza da Quintana at 12.00 am on the 24th July.

In addition to all the above mentioned, there will be shows of old vehicles, guided tours, children shows, and much more!

Here you can find the entire program for this celebration.

To celebrate St James’ Day, Galiwonders offers a special discount if you make a reservation with us on the next few days. You have until the 28th of July! Don’t miss it!

If you want to visit Santiago or walk the Camino de Santiago do not hesitate to contact us! We will take care of all the logistics so that you can focus on enjoying your trip!