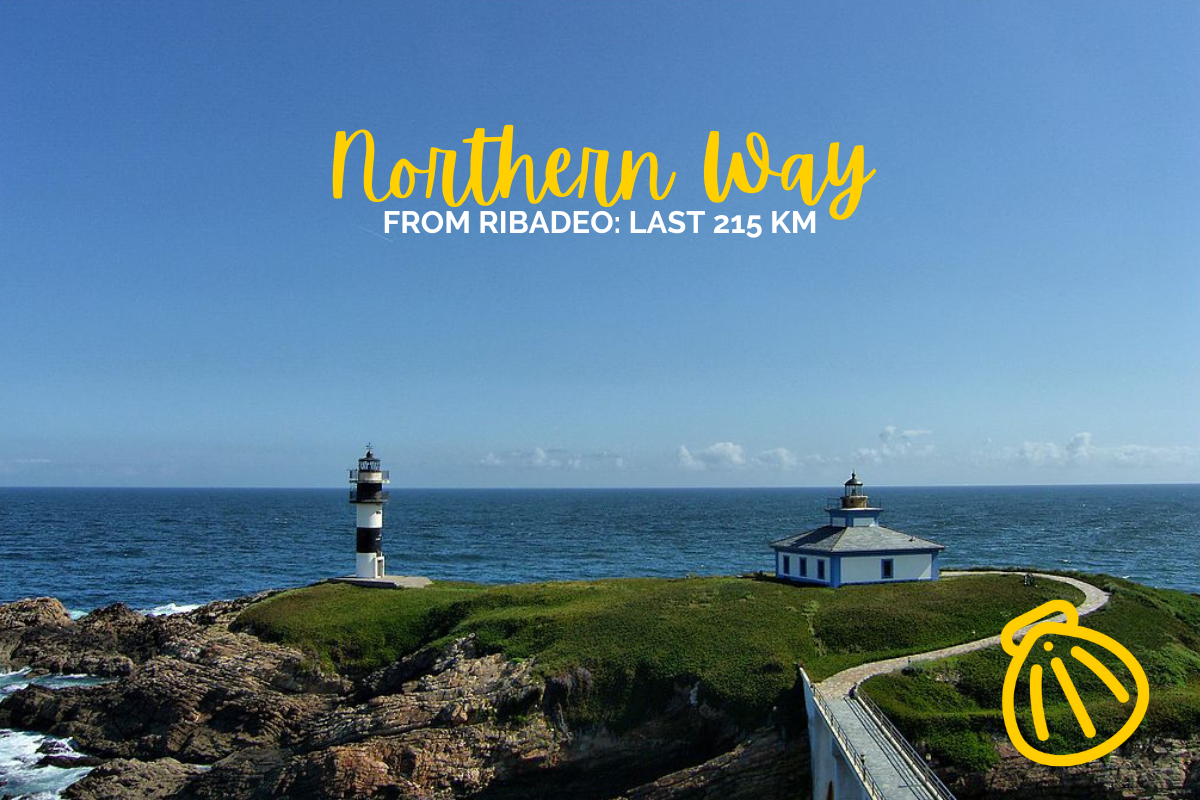 How long does it take to do the Santiago’s Way from Ribadeo? Which route of the Way is the one that passes through this town?

In this post we will find answers to this and many other questions about the last stretch of the Northern Way. The one that marks its last 215 km: from Ribadeo to Santiago de Compostela.

What is the distance from Ribadeo to Santiago de Compostela?

The Northern Way is a route of spectacular views, great historical richness and high physical demand. Those pilgrims who choose this route will be able to discover the diversity of northern Spain: the Basque Country, Cantabria, Asturias and Galicia.

The Jacobean Way of the North covers more than 800 km of route, from Irun (right on the border with France), following the coast to Ribadeo. It is at this point where we begin our guide, which leaves the Atlantic coasts to enter the interior of the lush Galician community. 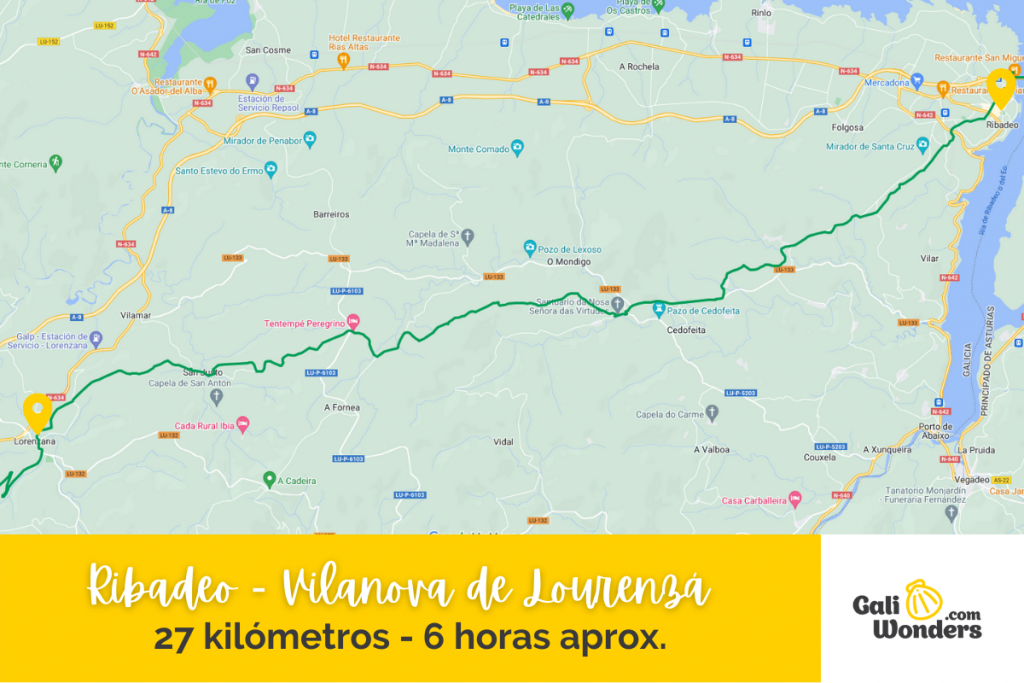 Before starting your stage, make sure you know where you can get your credential in Ribadeo. You can find more information here.

It is time to say goodbye to the coastal views that have accompanied us throughout the trip. From this point, you enter the mystical community of Galicia, so the signage will also be in Galician.

This is a very rural stage where life is structured around the main road. You can find vestiges of numerous civil and religious buildings such as the parish church of San Vicente de Covelas, one of the oldest buildings in Ribadeo. Renovated after the damage of the French invasion, it is located at the top of Covelas, with a panoramic view of the Cedofeita Valley where you can see the Pazo de Cedofeita, a private house, which seems to grow from the earth itself. A few kilometers later, you will come across the Santuario da Nosa Señora das Virtudes, a church with renaissance paintings of a religious nature that are incredibly well preserved.

Back on the route, you will travel kilometers in which the villages will be tiny and numerous. Pure rural and traditional Galician life, where the locals dedicate their time to their farms. After 6 hours of route, and once arriving at Vilanova de Lourenzá -also known as Lorenzana- we recommend a visit to the Monastery of San Salvador. Its imposing construction is adorned with a baroque facade that is considered an architectural precedent of the facade of the Obradoiro of the Cathedral of Santiago de Compostela. 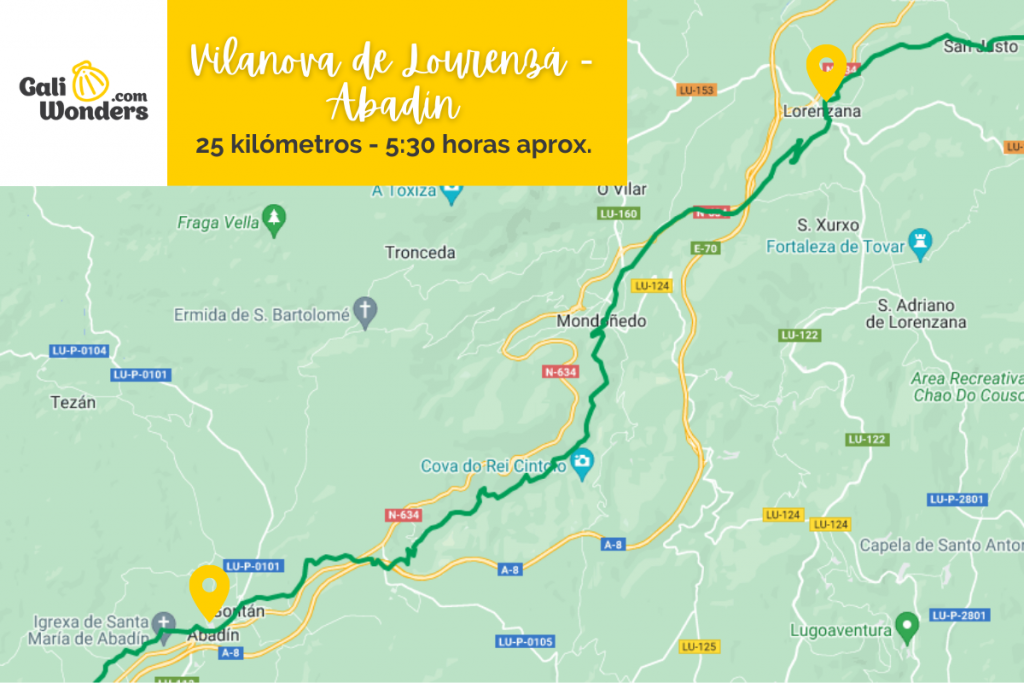 Leaving Vilanova de Lourenzá, the path runs along a stretch of the national road. The level rises progressively, so it will offer fantastic views from the mountains of one of the most unspoiled regions of the Galician community.

Shortly before the halfway point of our journey, we will find ourselves crossing Mondoñedo, one of the most emblematic points. Of great cultural importance, it was the capital of one of the seven historical provinces of the Kingdom of Galicia, until its division in 1833. Its streets are full of religious monuments such as the Cathedral of Mondoñedo, the Church of Santiago, the Sanctuary of Los Remedios or the Hospital of San Pablo. The best known, however, is probably the Chapel of San Roque, located on the old royal road, which bids farewell to the pilgrims as they pass through Mondoñedo.

Again on the route, and halfway between Mondoñedo and Abadín, is Cova do Rei Cintolo. A natural cave full of stalactites, stalagmites and lakes that will delight any amateur speleologist, with a length of almost 6.5 kilometers. A unique stop for those looking for something different.

You will have walked about 5 and a half hours to your rest in Abadín. 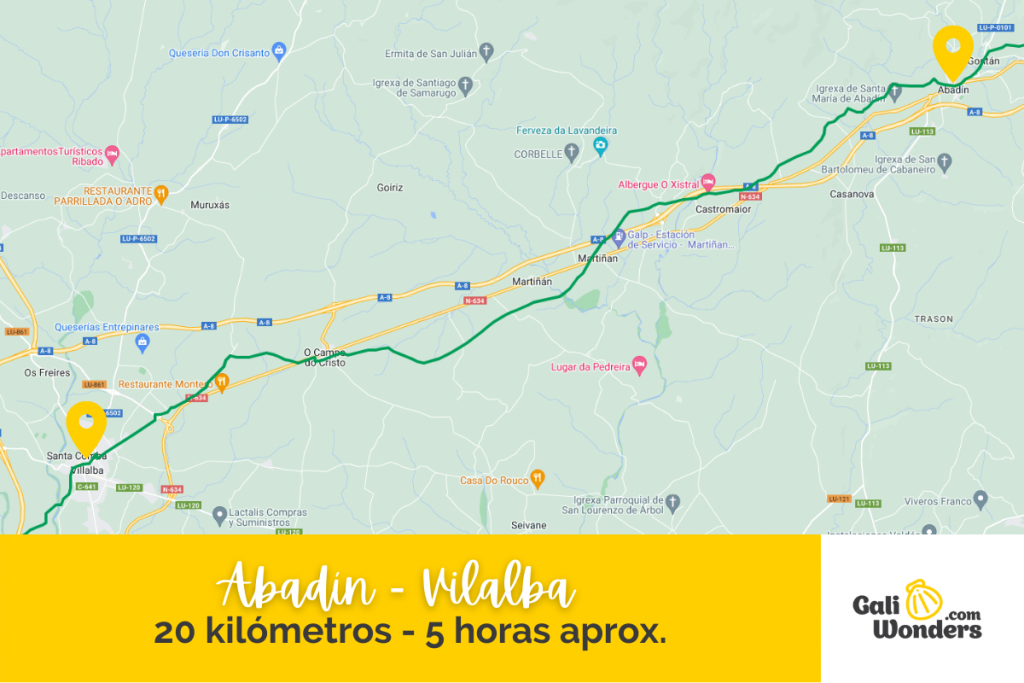 The Northern Way becomes a range of greenish tones as we pass through Abadín and will take us through forests, rural areas, and villages with farms. Shortly after leaving behind our last stop, we will find the Church of Santa María de Abadín. Small, coquettish, very well preserved, who can imagine that this modest construction dates back to the 12th century. It is worth stopping to admire its well-maintained garden, adorned by the original cruceiro, an element that we will see very often in this stretch.

Halfway through the stage we will cross the village of Martiñán, known for the landscapes left by the Batán river. Worthy of mention is the Ponte Vella de Martiñán, where stone, vegetation and water intermingle giving us a scene worthy of a moment of stillness.

Although it is possible to continue to Baamonde, our recommendation is to spend the night in Vilalba (the last town in several days), and recharge your strength and supplies after having walked for 5 hours in your day. 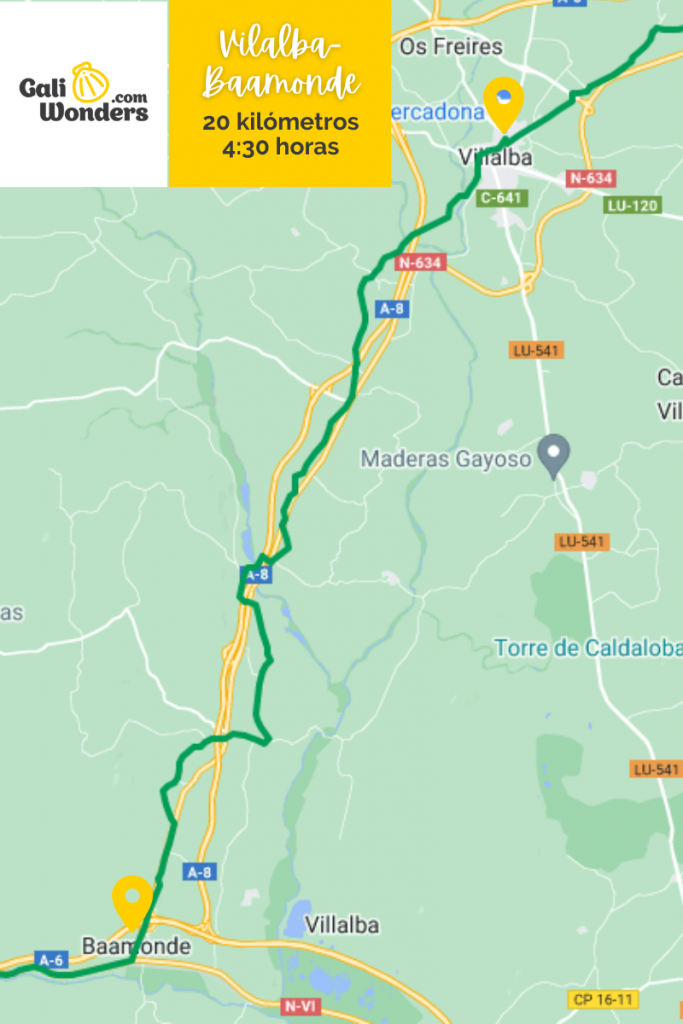 The stage from Vilalba to Baamonde will be quiet and pleasant, as in previous days. Much more nature, less monuments. So we like to recognize this day as a day to reflect on your Way.

It is also important to remember that if you want to receive the Compostela on your arrival in Santiago, Vilalba marks the last 100 kilometers you need to walk to claim your certificate.

Passing through the parish of A Ínsua, halfway through the day, we will cross A Terra Cha, a Galician region with a lot of history. This plain combines hillocks crowned by ancient Roman forts with cultivated plains and small ponds and streams. A gift to the eye that will transport us to simpler times.

The culmination of the scene is found in the Ponte de Saa, emblematic road bridge, which saves the crossing of the river Labrada.

For this day, we recommend bringing plenty of provisions, as it can be difficult to find food stores along the way. This day the walking section is a little shorter than usual, with a total of 4 and a half hours. 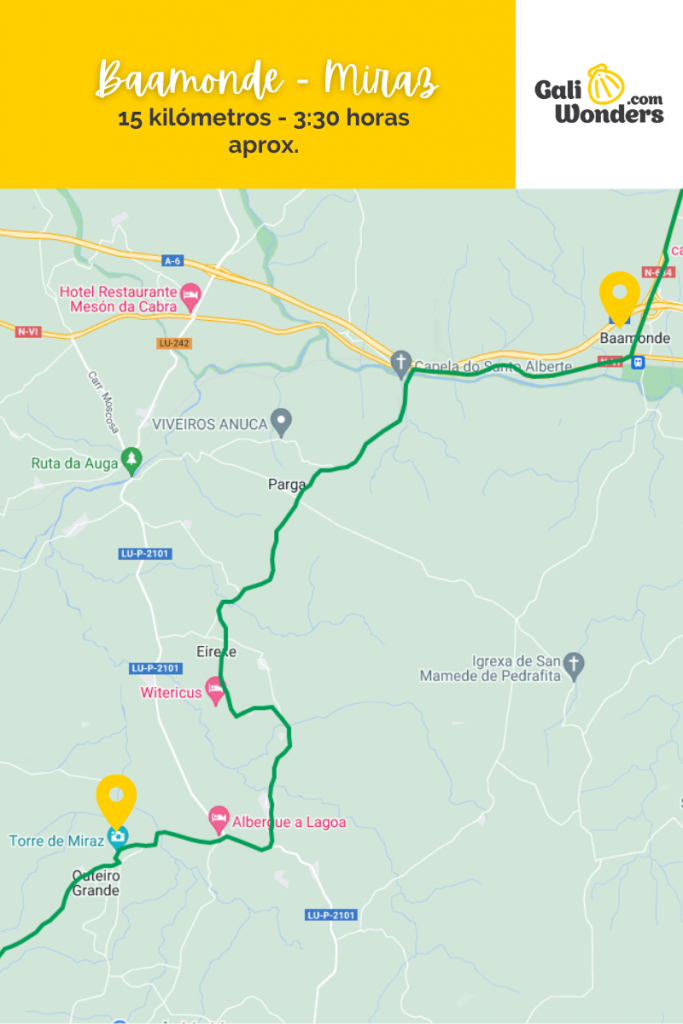 Baamonde is a restorative stop. A charming village, stopped in time, where the main protagonist is the Parga River, which will accompany us in parallel on the Way. The river recreation area of Baamonde is a highly recommended park to start your stage and get strength for the day ahead.

We say goodbye to Baamonde with the Millenary chestnut tree, sheltered by the Church of Santiago de Baamonde. This incredible tree contains carvings and little secrets that are worth visiting.

We will follow the national road for a few kilometers until we cross the Parga River, where we will leave on our left the Chapel of Santo Alberte, a beautiful, sturdy granite building in Gothic style that is surrounded by a peaceful meadow, where you can stop to refill water.

As in the previous stage, the road will take us through rural areas. Likewise, it is a quiet day, lasting only 4 hours, but with few convenience stores along the route. 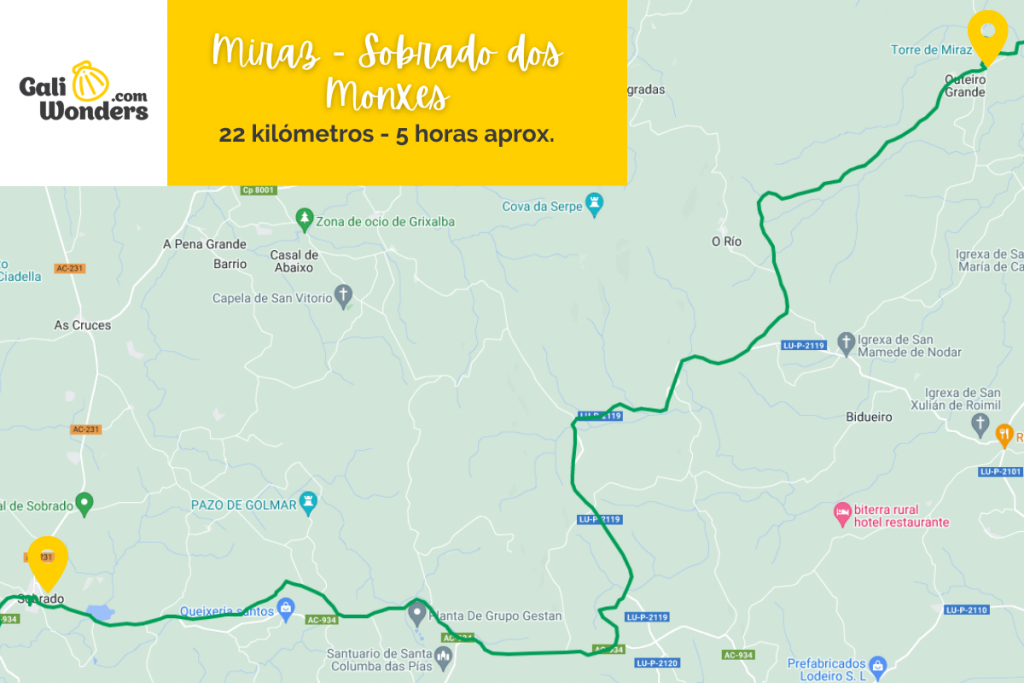 Once in Miraz, and all of them very nearby, you can visit the Tower, the Church and the Recreational Area of Miraz. A quick glance and you will find yourself standing still in time, admiring the peaceful atmosphere of its streams and forests.

Today we will reach the highest point of the entire Northern Way, 710 meters of altitude, almost without noticing it. The stage will be very quiet and lonely, walking mostly on dirt tracks, crossing streams and small villages, until we reach Sobrado dos Monxes. Here we will first find the great Lagoa de Sobrado dos Monxes, declared a Wetland of European Interest. 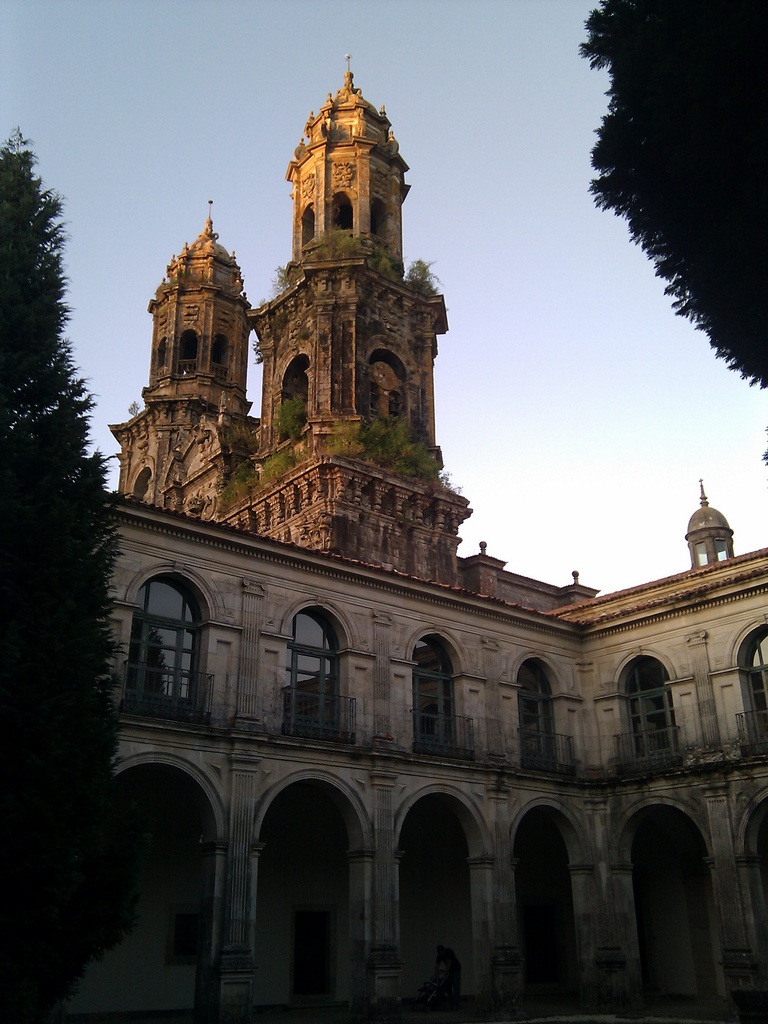 Already in the town of Sobrado in A Coruña, we will see the imposing Monastery of Santa María de Sobrado. The construction, of the Cistercian religious order, is of great historical importance for the Way. For centuries a spiritual and economic engine of the region, for pilgrims it has always been a symbol of refuge.

The monastery was founded in the 10th century, and all that remains from the medieval period are the refectory, the kitchen and the north arm of the transept. The three cloisters surrounding the church are relatively new, always built with the cross plan of the church as the center. Its moment of glory is the completion of the monumental church, which was solemnly consecrated in 1708.

But it was not always this way. The constant changes of religious orders disfavored its activity as a nucleus and the different ecclesiastical confiscations deteriorated its state of conservation and it was abandoned during the XV and XVI centuries. In the 19th century all of its construction was sold to people not related to the religious institution, which culminated in its deterioration. It was not until 1954 that the buildings were returned to the archbishopric of Santiago de Compostela and a new stage began, this time as an asylum for the increasingly popular Santiago’s Way. 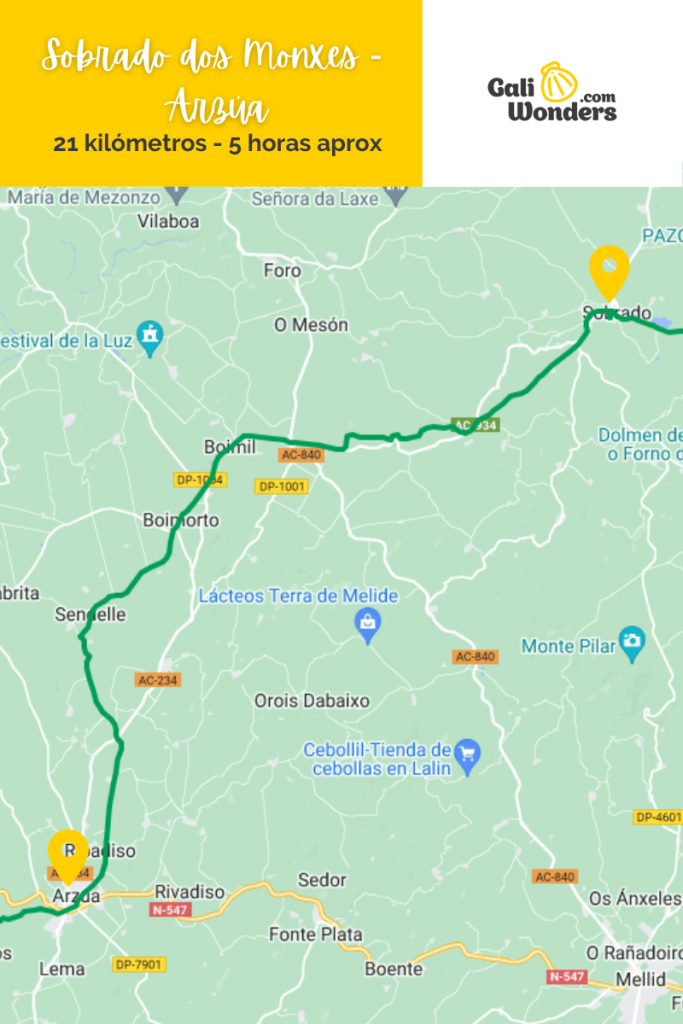 It is time to enjoy the last stage of solitude and peace, since from Arzúa the route joins the French Way.

Although this stage does not present many variables or points of interest, it is worth mentioning the various streams and brooks that brighten up the Way with their soothing sound. We will also come across the Tambre River on several occasions.

The only two religious buildings we come across are the Church of San Lourenzo de Carelle and the Church of Santa María de Sendelle, both from the 12th century, very modest in style and size.

We arrive at Arzúa after approximately 5 hours of the Way, to recharge our batteries. From then on, the way will become much more social, until we reach Santiago de Compostela. 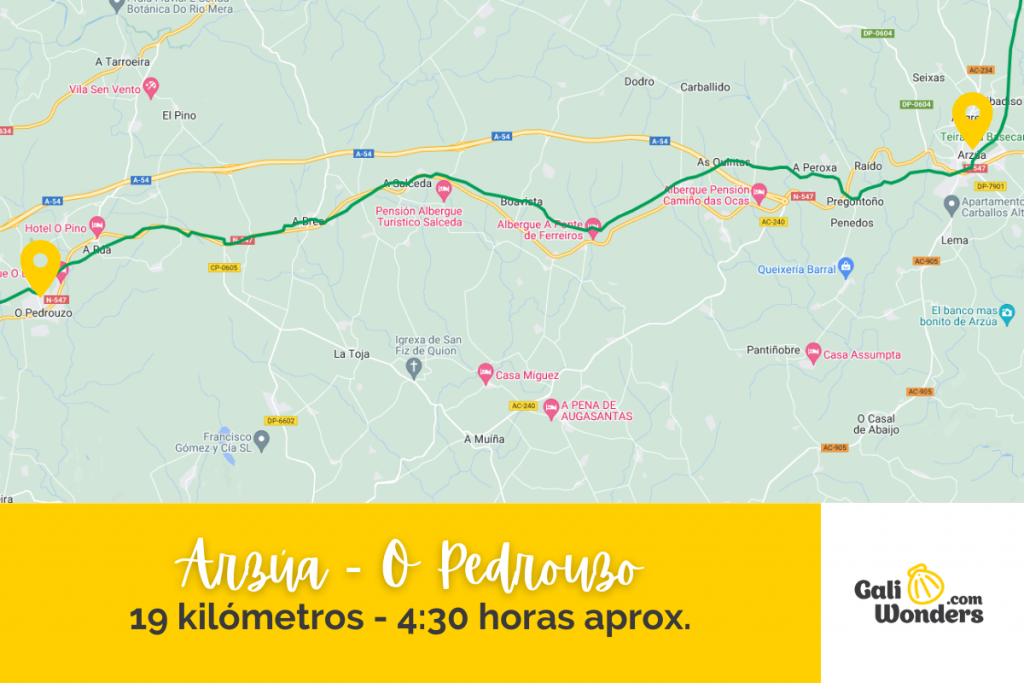 Leaving behind Arzúa, and its cheeses and sweets…, the journey continues towards Pedrouzo. Santiago de Compostela is closer, there are almost 40 km left to complete the pilgrimage.

In this stage you will walk 4 and a half hours crossing long wooded tracks between forests and green meadows. This will be the last stage before entering the area of Santiago de Compostela.

Some pilgrims make the stage from Arzúa to Santiago in one day. Our recommendation is to stop in O Pedrouzo, to be able to enjoy the last stage in peace and quiet. 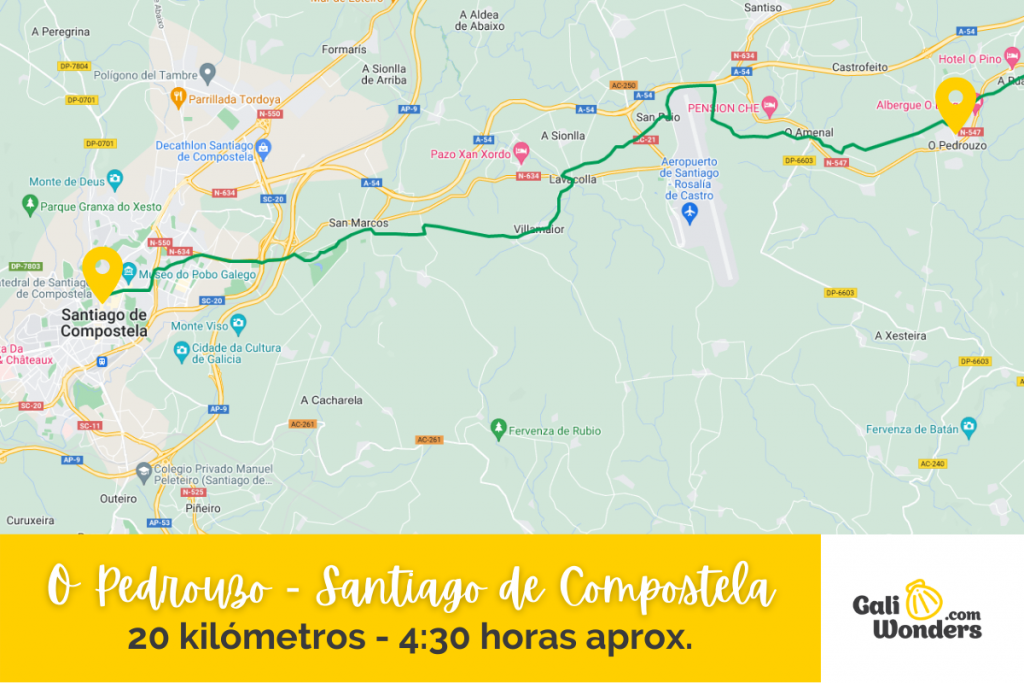 O Pedrouzo is the last village before entering O Monte do Gozo, from where you will have a nice panoramic view of the city of Compostela.

As in the last stage, you may need about 4 hours and a half to complete it, as the distance is similar.

Don’t forget to try the famous Padrón peppers before arriving in Santiago. They are very famous in Galicia, and throughout this area given the proximity of Padrón to Santiago de Compostela.

Last day of walking, before reaching Santiago de Compostela. For many pilgrims, this stage can be described as a moment of euphoria, after so many days of challenges.

Are you looking for the map of the route of Santiago’s Way from Ribadeo? Here is a link so you can consult the sections. By zooming in, you can see the entire map and details of each section:

Do you have any doubts about the Northern Way from Ribadeo to Santiago? Would you like to walk this beautiful route? If you would like to receive a tailor-made itinerary about this or any of the tailor-made trips we offer on the Santiago’s Way, do not hesitate to contact us!