Portico da Gloria: a Romanesque jewel that we can visit once again

The Portico da Gloria is not only one of the Cathedral of Santiago de Compostela’s most iconic elements, but it is also one of the best examples of Romanesque art in the world. Now, after 10 years of restoration works, it will be posible to visit the Portico da Gloria once again. Do you want to know how? Then keep reading!

The Portico was sculpted between 1168 and 1188, in only 20 years. The architect and sculptor that was in charge of its construction was Master Mateo. Historians do not know much about him, but on the other side of the Portico you will find a self-representation of Mateo himself. The sculpture is also known as Santo dos Croques, for according to popular tradition, if you hit your head against his, (croque means head-butt in Galician) he would transmit all his wisdom to you.

Originally, the Portico was conceived to be the atrium or nártex of the Cathedral. As such, it marked the entrance between normal life and the spiritual realm. During the High Middle Ages, the nártex was the place for penitentes (sinners), catecúmenos (those who had not been baptized yet) and energúmenos (those possessed by the devil). 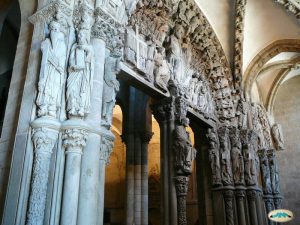 For many, the Portico da Gloria is the greatest work of Romanesque sculpture in the Iberian Peninsula. On it, there are more than 200 figurines sculpted by Master Mateo. Even now, the figures stand out for their expressions, the detail on their clothing, and after the recent restoration, their vivid colors.

The Portico is divided into three main arches, that coincide with the division of the main nave. In each of them, we can find a representation of a biblical story about salvation. After all, the name of the Portico translates as “Portico of Glory”.

Even though nowadays it is hard for many to understand the representation, during the Middle Ages, all pilgrims would have understood its meaning perfectly. In a time when most people could not read, sculpture was an effective way to tell stories. The Portico was the first thing many saw upon arriving in the Cathedral, after a long, tiring walk. The stories full of color that the Portico told were a welcoming into another, holier world.

The Portico represents the Old Testament on the right, and the New Testament on the left. On the left arch, there is a representation of the Old Testament, with figures such as Adam and Eve, Abraham, Isaac, Moses or David. On the central arch, a resuscitated, kingly Jesus is surrounded by the Evangelists, on a representation of the apocalypse. The right arch represents the final judgement. On it, the souls of the just are being taken to glory by the angels. Opposite them are four demons that will punish the wicked. 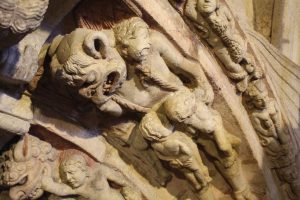 The Apostle St James presides the mullion, that is, the column that divides the composition in half. Underneath him, there is a sculpture of the Tree of Jesse, which represents the ancestors of Christ.

On each side, the columns also follow the division between the Old Testament and the New. On the left, are the prophets: Moses, Isaias, Daniel and Jeremiah. The right is the place for the apostles Peter, Paul, James and John. Amongst the prophets, the sculpture of Daniel has been object of legend for many years. His smile, unusual in Romanesque art, marked one of the small changes that were beginning to create a new form of art: the Gothic.

When can I visit the Portico?

After 10 years of restoration, it will soon be possible to visit the Portico da Gloria again. The visits will be divided into two phases until 2021, the next Jubilee Year.

The first phase will start at the end of July. As of now, the information from the Cathedral of Santiago sets the 27th as the most likely date when the visits will start.

On this first phase, visits will be for groups of 25 people on a first come first served basis. The visits will be free and the groups will access the Cathedral through Obradoiro Square. They will last 15 minutes and take place from 8.00 until 22.00, trying to accommodate as many visitors as possible. Nonetheless, the visits will be interrupted during the Cathedral’s services.

The second phase will start after the Portico is properly protected, most likely during the fall. However, since the conservation of the sculpture is a complicated issue, there may be some changes.

Some legends around the Portico 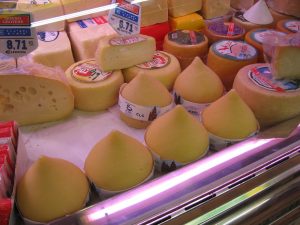 The smile, the queen, and the cheese

The Prophet Daniel and biblical Queen Esther are the protagonists of an unlikely story involving the Church’s authorities and a local cheese. Daniel’s smile, which contrasts with the lack of expression of traditional Romanesque figures, inspired this story. According to popular tradition, the statue of Queen Esther was well endowed, and Daniel smiled upon looking at her womanly figure. When the authorities at the Church saw this, they decided to make Esther’s bust smaller. As a protest, Galician people created a cheese to commemorate Esther’s breasts: queixo de tetilla, or “booby cheese”, named after its breast-like shape.

As legend goes, when the works were close to completion, the archbishop came to visit the Portico da Gloria. The archbishop then saw a figure that he could not identify on the centre of the tympanum. When he asked Master Mateo about it, the sculptor admitted that it was an image of himself, and the archbishop shamed him for his lack of humility. To show his repentance, Mateo represented himself on the other side of the Portico, as a kneeling figure praying to God: the Santo dos Croques.

Another legend says that he represents King Ferdinand II of León and Galicia. Ferdinand himself ordered the construction of the Portico, paying Master Mateo a great sum. Also, the king was buried in the Cathedral.

However, on this figure’s scroll there used to be a Latin inscription, “Architectus FEC“, which stands for “the architect made it”. If this is indeed a representation of Mateo, it would be an uncommon example of an artist signing their opus at a time when most where anonymous.

But what is behind his name? Well, since Santiago is a city of students, and Mateo’s talent was so great, a tradition started amongst university students, who would hit their heads against his in order to become wiser. A “croque” is a head-butt in Galician, and since the figure had magical powers, and was inside a cathedral, people started calling him “Santo”, a saint.

Whether he represents Master Mateo or King Ferdinand II, it was the people who made him into a saint, and local tradition that bestowed him with the powers to grant wisdom to whoever bumps heads with him.

The hand on the tree

On the Tree of Jesse, right underneath the Apostle St James, there is a mark of a hand. Many say that the hand is there because pilgrims have been touching that same spot for hundreds of years.

However, some scholars believe that the hand was part of the original sculpture, as a representation of the hand of God. Therefore, the custom of putting a hand there would date back to the last 100 years. Up until at least 1885, it was customary to touch a different column.

The Portico da Gloria is valuable not only because of his importance as an unique piece of Romanesque art, but also as part of the imaginary of many generations of locals and pilgrims.

If you are planning to walk the Camino or visit Santiago de Compostela or Galicia, do not hesitate to contact us!