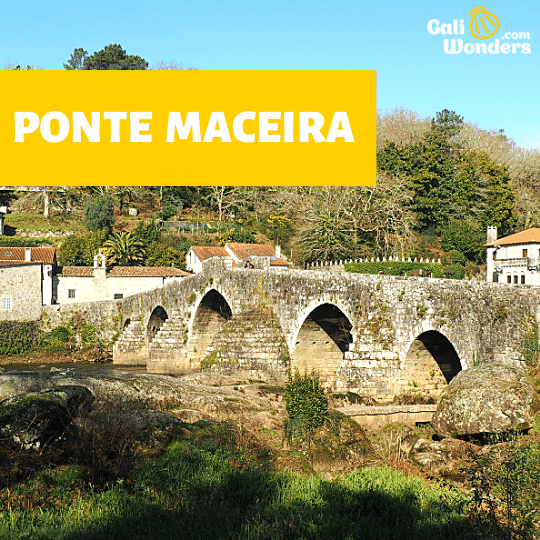 There are magical towns and villages along the Camino de Santiago. Places that are hard to visit due to their small size, bad communications, or just because their existence is not known. But the Camino is wise, and allows us to discover some of these secret gems. Such is the case of Ponte Maceira, on the Camino de Finisterre, the first emblematic stop on this route after leaving Santiago de Compostela behind.

Where is Ponte Maceira?

Ponte Maceira is located in the province of A Coruña, more specifically in the parish of Portor (Negreira City Council, very close to Ames). Just 15 km from Santiago de Compostela (depending on the route you choose) it is one of the best known points on the Camino de Finisterre y Muxía. Specifically its first stage, which goes from Santiago de Compostela to Negreira.

The route from Santiago de Compostela on foot usually takes about 3 hours and a half (depending on the speed of each pilgrim and the number of stops, of course). By car, approximately 20 minutes. Nowadays, in addition to the pilgrims on the Camino de Santiago, visitors from the different excursions that depart from Santiago come to Ponte Maceira. It has become an iconic stop on all the day tours to the Costa da Morte & Finisterre, departing from Santiago.

Crossed by the Tambre River, Ponte Maceira is a small village with just 73 inhabitants (at the time of writing). It is part of the list of Most Beautiful Towns in Spain (the first town in the Province of A Coruña to achieve it) and, recently, it was declared an Asset of Cultural Interest (BIC).

Its bridge, A Ponte Vella, is undoubtedly its most recognizable asset, and dates back to Roman times, as we will see later. Hórreos (granaries), mills and cobbled streets complete the attributes of this picturesque town, which also stands out for its green surroundings. 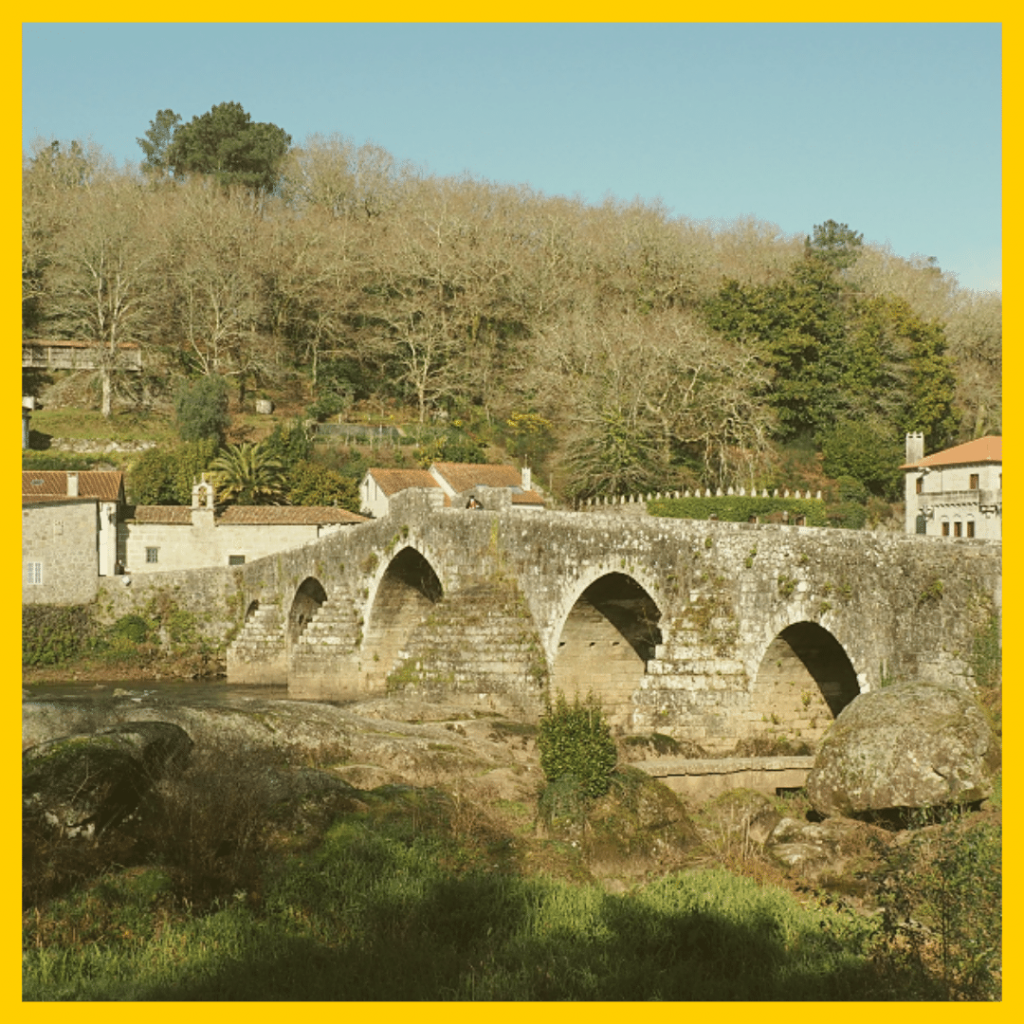 Among its festivities, the “Noche en Vela” stands out, which takes place in the month of July, offering a music concert that is only illuminated by the hundreds of candles that are placed on the bridge. Quite an experience worth mentioning. In addition, at the Romanesque Fair (held in September), the town puts on its best clothes, set in medieval times.

Despite the beauty of the area, and its tourist attraction, it is not usual to stay in the town itself (nor is there hotel offer available). If you want to spend the night and get to know the area in depth, we recommend staying in neighboring Negreira, or even in Santiago or Olveiroa. There are also some country cottages along the Camino. For this reason, we do not recommend finishing the stage in Ponte Maceira. 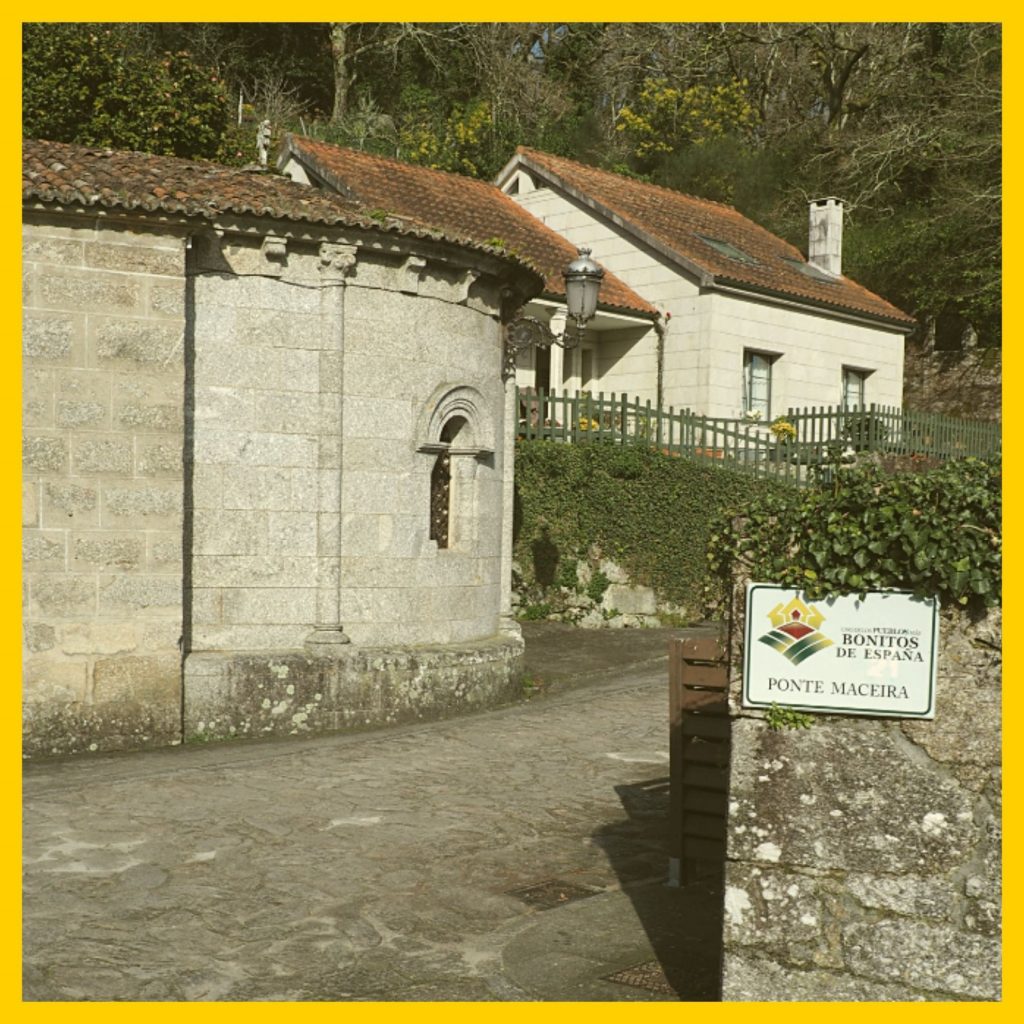 What to see in Ponte Maceira

Despite being a small village, Ponte Maceira has a lot to offer to its visitors. Just the first image on the village, with its iconic bridge crossing the river, and the small traditional stone buildings on the other side, constitute more than enough to justify the visit. But we can go further:

A Ponte Vella (or Old Bridge in English) dates from Roman times according to specialists. Although the construction that we see today (built on those bases of original) dates back to the end of the 13th century. It was built to improve communications with the coast.

It has five arches (the middle one being the highest) and a width of approximately 2 meters. The weather conditions typical of Galicia required some reforms in the 18th century.

It has several legends around it (as we will see later). Some contrasted, and others that continue to be surrounded with this halo of mystery.

Walk along the river and its mills

If you are doing the Camino de Santiago, and Ponte Maceira catches you on the way, you are probably not in a position to add many more kilometers to your route. But if you have some time (and desire!) available, a walk around the Tambre river is highly recommended. Without having to go much further, in the town itself, it is possible to walk along the river and discover its many mills. 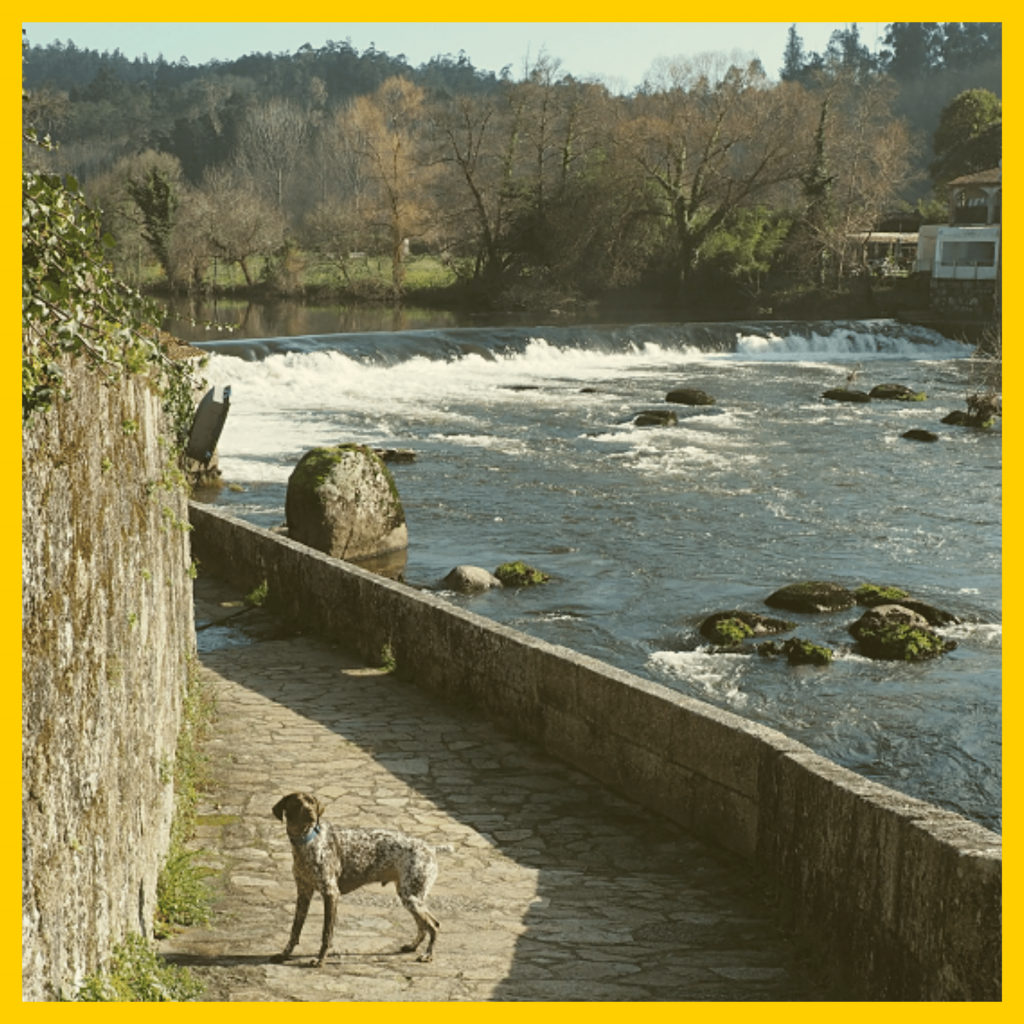 This Galician country house, built in the middle of the 20th century, is currently privately owned. But this does not prevent us from contemplating its architecture, which combines history and modernity. In addition, it has an impressive garden, with pigeon houses (pombal in Galician) and typical Galicia granaries. Its architecture blends perfectly with the surrounding vegetation.

The streets of Ponte Maceira

The cobbled streets of Ponte Maceira, with the sound of the Tambre River in the background, are one of its great attractions. Hórreos, dovecotes, mills and cruise ships will accompany us on our walk. As well as traditional stone houses, white stone, and hanging balconies. Be it summer or winter, any time is a good time to enjoy this picturesque place. Both the sun and the mist invite you to stop and enjoy the landscape. 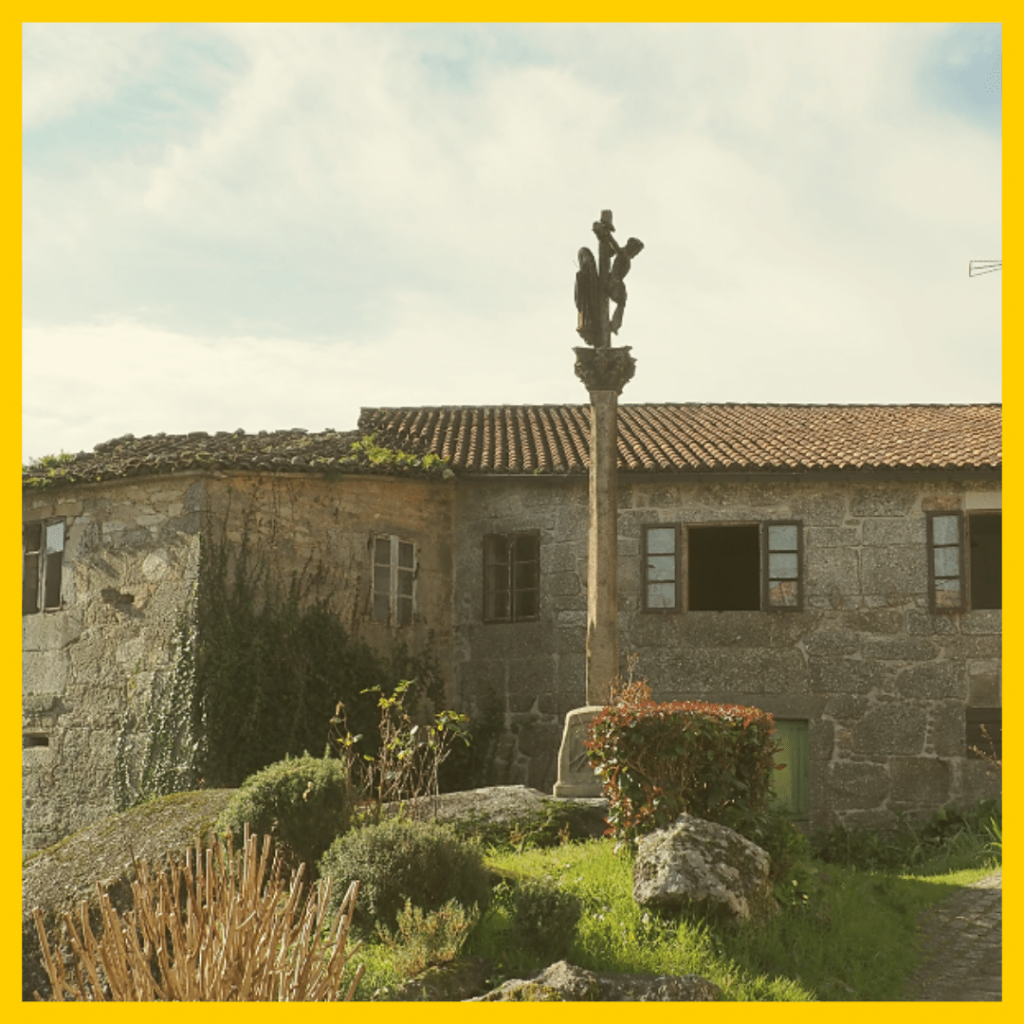 Undoubtedly, the great attraction of Ponte Maceira is not only the town itself, but also its surrounding area. On the Camino de Santiago itself, it is worth highlighting the views of A Maía valley (at the top of Mar de Ovellas), the town of Augapesada (and its medieval bridge), or the tree-lined path along the Tambre river, in the area from A Barca. 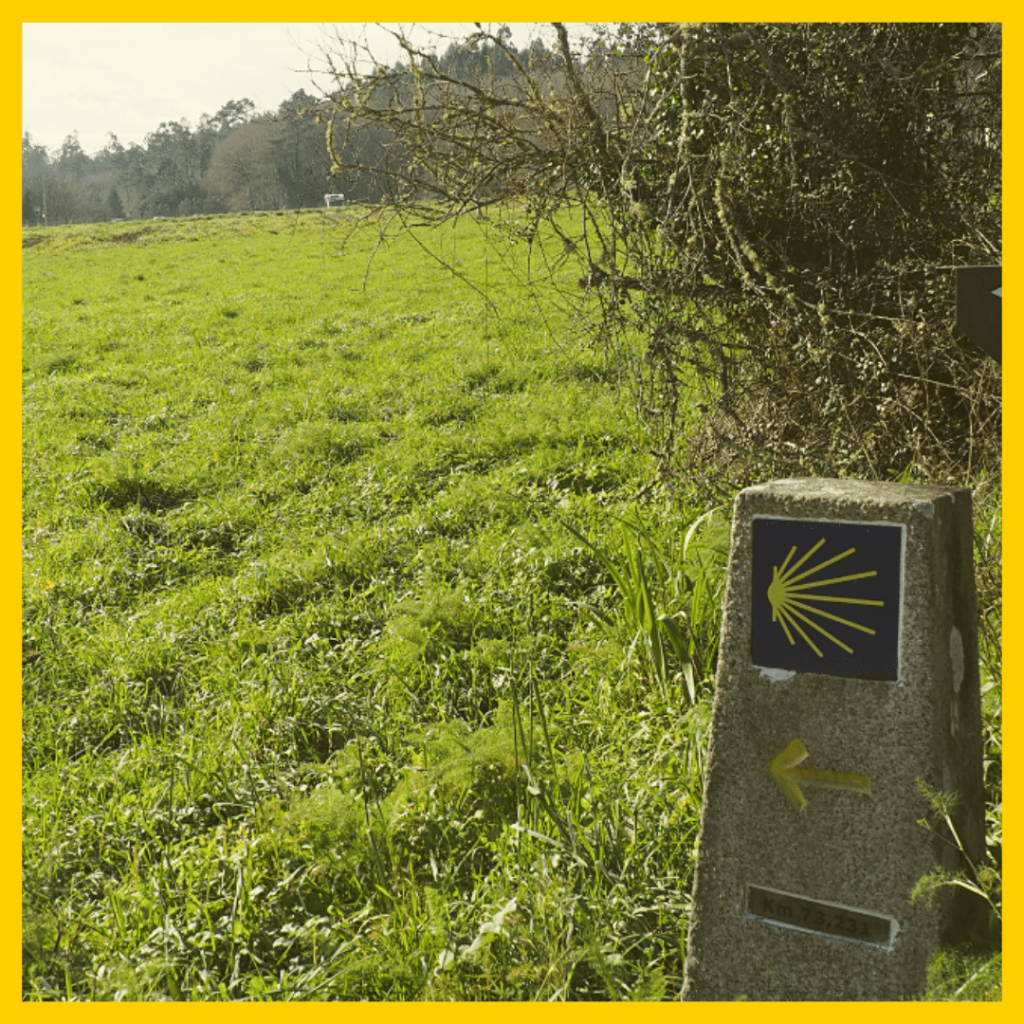 In addition, just 4 km from Ponte Maceira, we reach Negreira. This town marks the beginning and end of the first stage of the Camino de Finisterre y Muxia, and we can find various options in terms of restoration and accommodation. In Negreira we can visit the Pazo do Cotón, from the 14th century, which is the most significant point to visit, together with the chapel of San Mauro (or San Amaro in Galician). We can find references to this Galician town in the most international literature. The writer Ernest Hemingway mentions it in his novel For Whom the Bell Tolls.

It is also worth noting in the surroundings of Ponte Maceira, the Reservoir of Tambre, which has spectacular views, and is also a fishing spot. 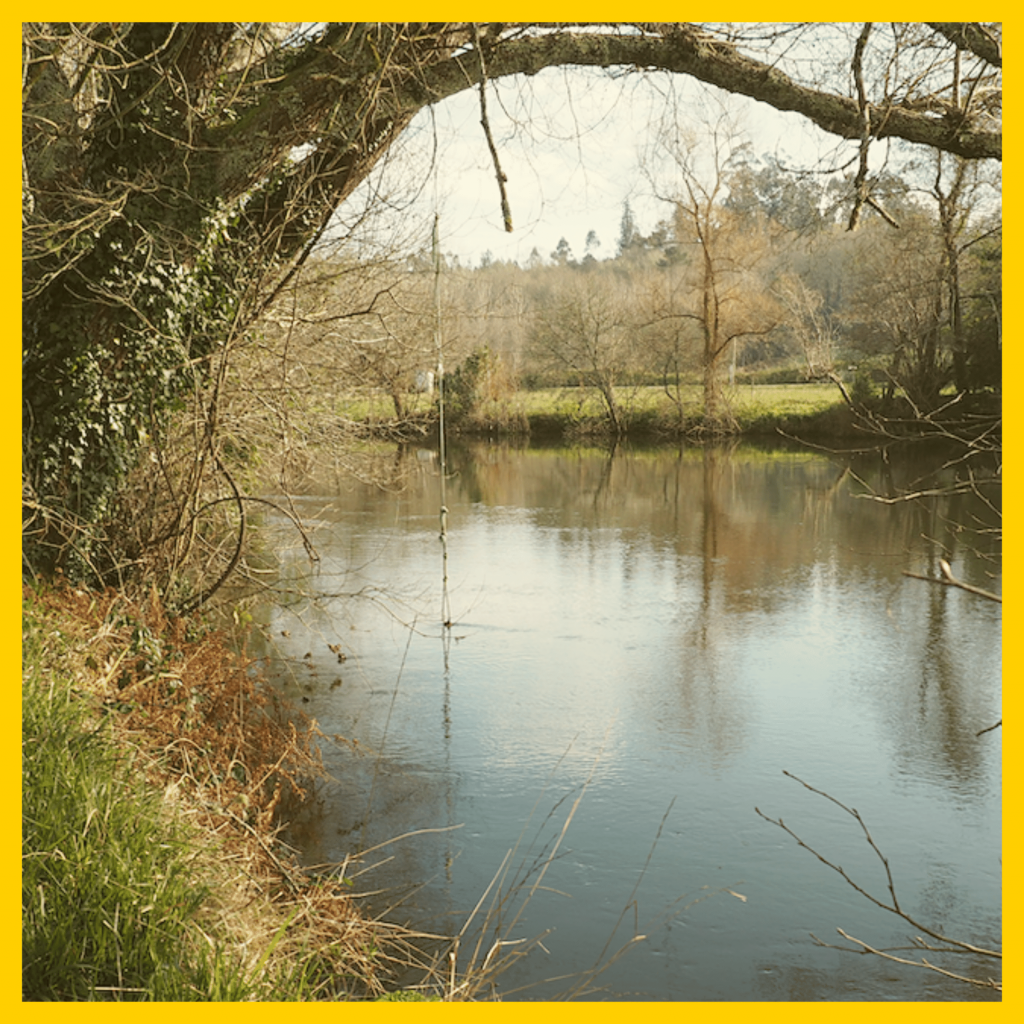 Being Ponte Maceira a place of passage on the Camino de Santiago, it is to be expected that many of the legends that surround it are related to the Jacobean tradition. This is the case of the story that tells how the disciples of the Saint James the Apostle, in search of the mortal remains of the apostle, fled from the Roman soldiers who tried to capture them. Once the Christian disciples crossed the well-known bridge, it miraculously collapsed, leaving the Romans behind. In this way, thanks to divine intervention, they were able to escape from their pursuers.

On the other hand, it is worth remembering the battle between the armies of Bishop Gelmírez and the noble house of Traba, the Battle of Altamira (also known as the Battle of Ponte Maceira). In this case, we are talking about an episode duly documented by historians. Both parties disputed the area of ​​the river Tambre, and the valley of A Maía, in the fifteenth century.

Do you know any other legend or story about Ponte Maceira? Have you visited this magical place? If you are thinking of doing the Camino de Finisterre y Muxía, now you know you can’t miss it!