The secrets of the pilgrim ghost legend of the Camino Santiago

The Camino de Santiago is one of these adventures that can be considered a magical journey. It is a unique experience that remains, for ever, in the memories of all pilgrim who walk or cycle it. It is a really spiritual route, not only because of all the motivations that may lead pilgrims to walk it, but also because of the background, stories and legends of each itinerary: all of them full of charm, mysteries and traditions.

Today we would like to talk about one of the most popular legends, the one that refers the pilgrim ghost of the Plaza de la Quintana.

The story of the pilgrim ghost of Santiago de Compostela

According to the legend, in Plaza de la Quintana, when the night comes and the lights of the city are switched on, it is possible to see the shadow of a pilgrim reflecting on one of the façade of the Cathedral. This pilgrim is waiting there, all nights. 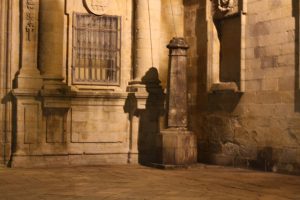 One of the legends states that he was a priest that had a relationship with a nun from the Convent of San Paio and, that every night used to meet her there. To do so, he had to walk through a secret passage below the stairway of the Plaza de la Quintana (that connected the Cathedral and the Convent).

After a while, the priest proposed the nun to run away together, to live and enjoy their love, completely free. That moment arrived, and they decided to meet at night. The priest dressed himself up as a pilgrim, to go unnoticed; he waited, and waited, patiently, but she never arrived. And he never knew the reason. The priest never assumed what happened, and he keeps waiting there, all nights.

If you pass by the area, you may see his shadow there, still waiting. A shadow that remains in the same place, as if it was the first time.

But there is always more versions of a same story. In this case, there in another explanation of the pilgrim ghost of the Camino de Santiago. It is said that it is the shadow of a young French pilgrim, who killed his father when he was 18 years old, to inherit all his fortune. He was proven guilty in a court and was sentenced to the galleys.

After some years in prison, he was imposed to walk the Camino de Santiago, in order to redeem his sins. This way, he could inherit all the wealth of his dead father. On the way to Santiago de Compostela, he kept having the same evil behavior: he killed two more men, and he run away dressed up as a monk.

He arrived in Santiago de Compostela before the sunset, and all the guesthouses were full of pilgrims. So, he decided to sleep in the street, right in front of the Cathedral, and there he fell asleep. In this situation, the spirit of his father appeared, and told him that with the pilgrimage, he would be forgiven for killing him. However, he could not be forgiven for killing the other two men on the Camino; at least, not until their spirits reached Santiago de Compostela. The young man woke up and tried to kill again the spirit of his father, but he was faster and sticked his sword of the chest of his son.

Since then, according to the legend, the young French pilgrim keeps waiting every night at the Cathedral; waiting for the spirits of the two men he killed, to redeem his sins.

Do you know any other version of the pilgrim ghost legend? Any other mysterious story related to the Camino de Santiago? Do not hesitate to share it with us here!