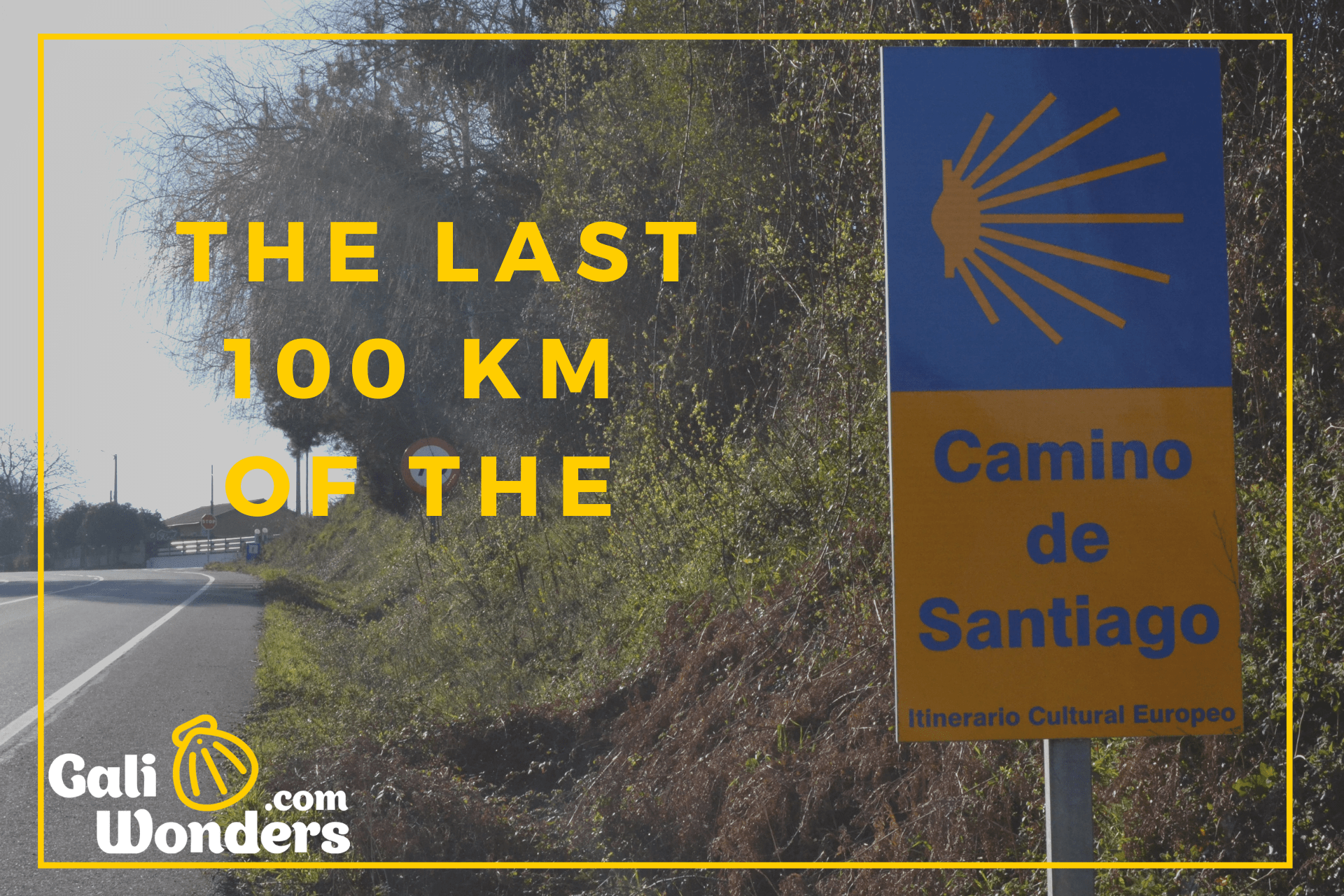 Sarria is, year by year, one of the favorites locations for the pilgrims to start the Camino de Santiago. Why? This place is located along the French Way, the most popular and social camino. Also this is the minimum distance to walk if once in Santiago you want to get the Compostela certificate. If you would like to have this document when you finish your way, you should walk at least the last 100 km of the Camino de Santiago. Check out more!

Around the 25% of the pilgrims that arrive every year to Santiago de Compostela begin their way in Sarria. In other words, this is the most common starting point for those who want to do the Santiago’s Way on foot and don’t have too much time. 116 km and five days separate this town from the Galician capital.

The first stop after 22 km is Portomarín, important since the Middle Ages because pilgrims were passing through it. In the 60s, the village was totally flooded after the construction of the reservoir of Belesar. People could save the main monuments and move them stone by stone to its new placement, like the Roman church of San Pedro and the fortress church of San Nicolás. 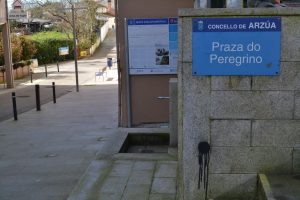 Secondly, Palas de Rei, 25 km far away from Portomarín and a compulsory stop on the French Way according to the Calixtinus Codex.

The next destination is Arzúa, one of the most crowded towns along the Camino. This municipality is known because of its cheese Arzúa-Ulloa. to celebrate this delicious product, the village has a gastronomic festival at the end of February/beginning of March.

Between Palas de Rei and Arzúa there are 29 km. For this reason many pilgrims prefer to divide the stage in two and sleep over in Melide. From Arzúa there are 20 km to O Pedrouzo. Here there is usually the highest concentration of people of the entire Camino.

Finally, you will arrive to Santiago de Compostela after walking the last 18 km.

The fact of arriving to Santiago following the route of the Portuguese Way from Tui means that pilgrims will walk around 114 km. This itinerary is less crowded than the French one and begins on the border with Portugal.

We strongly advise you to visit the Catedral de Santa María de Tui before starting to walk the 16 km that separate this town to O Porriño.

The second stage can be done until Redondela (15 km) or Arcade (22 km, more recommended) and it has amazing views to the Atlantic Ocean. From Arcade to Pontevedra there are only 11 km and on this day, you will cross a Roman bridge over the Verdugo river. Pontevedra is a small city known due to its historical area, where we invited you to walk around and relax. 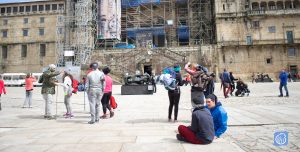 After leaving Pontevedra, the pilgrims go to Caldas de Rei (21 km), where they sleep for the night before continuing for another 19 km until Padrón. This place is known because it is the first place where it arrived the boat with the body of Santiago the Apostle.

Precisely, the last of the stages of the Portuguese Way is the longest (24,5 km) and it takes us directly to Santiago de Compostela. Once in the final destination, it is possible to rest over the stone ground of the Praza do Obradoiro and after that, go to discover this city.

If your plans include walking while looking to the Atlantic Ocean, we encourage you to do the 122 km of the Portuguese Way that goes along the coastline. The starting point of this route is Baiona, where you can also visit the Carabela Pinta Museum, the boat with the first news from the discovery of America in 1493.

After 23 km you arrive to Vigo, where you will start the second journey to Redondela (15 km). The second stage is the less intense of this Camino, so we advise you to rest with regard to the next days. There are 20 km from Redondela to Pontevedra, where the amount of pilgrims increase as it is the meeting point with the traditional Portuguese Way.

Back in the centuries, the pilgrims from the north of Europe or United Kingdom and Ireland used to arrive by boat to the ports of Ferrol or A Coruña and from there they walked to Santiago.

Nowadays, it is compulsory to do at least 100 km of the Camino de Santiago in order to obtain the Compostela. Consequently, the starting point of the English Way must be Ferrol. From there to Pontedeume there are 30 km that can be divided in two,  stopping in Neda and visiting the Monastery of San Martiño de Neda. 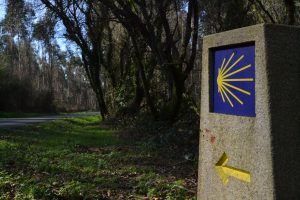 Pontedeume is 20 km far away from Betanzos. The old area of this town is considered with historical interest and it is protected by the Spanish Ministry of Culture.

Absolutely recommended a walk on its narrows streets before starting the 29 km that finish in Mesón do Vento. In addition, it is convenient to rest before the next 29 km to Sigüeiro.

Santiago de Compostela is just 12 km far away from Sigüeiro, perfect to arrive with energy to your final destination.

Another alternative starting place for those who want to walk the English Way and don’t mind to receive the Compostela accreditation is A Coruña. In this city, you should visit the oldest lighthouse in the world that is still working, the Hercules Tower. From A Coruña to Hospital de Bruma there are 33 km in a rural environment.

Above all, Hospital de Bruma is known because it was the only place in this route where to find a pilgrim’s hospital in the past. The second stage has 24 km and finishes in Sigüeiro, where the pilgrims from A Coruña join the ones from Ferrol. The English Way from A Coruña has 73 km, less than the 100 km needed to get the certificate. 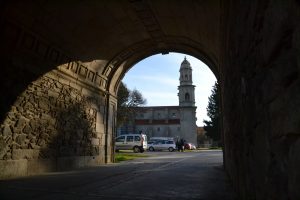 The Northern Way starts in Irún (800 km far away from Santiago de Compostela), but if you can’t walk it all, we suggest you to do it from Vilalba (117 km) so you can get the Compostela certificate.

The first stage departs from Vilalba and it’s 20 km long. It goes to Baamonde, where it is possible to visit a small church whose first stone was placed on the IX century.

The first and the second day (from Baamonde to Miraz, 15 km) along this Camino pass by a rural area with few shops. From Miraz to the next stop, Sobrado dos Monxes, there are 22 km. In this village you can find the Santa María Cistercian Monastery of Sobrado dos Monxes, with a beautiful architecture and located in a nice area where to relax.

The fourth stage, from Sobrado to Arzúa, is the last one you can walk without being in the multitude and it lasts 21 km. From Arzúa, the Northern Way joins other routes with a higher density of people until Santiago.

The Roman wall of Lugo is the only one in the world that is entirely preserved. We highly recommend to visit this monument before starting the 101 km that separate this city from Santiago de Compostela.

After that, you can do the first stage of the Primitive Way (24 km) and goes to San Romao da Retorta, a small and calm place. From this location to Melide there is a walk of 26 km. Those are the last kms noise-free, because after that the way will join the French Way. From there, the itinerary is the same than for those pilgrims who started in Sarria. 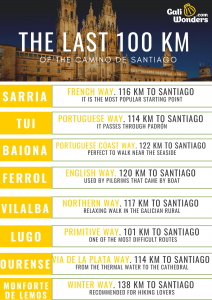 The pilgrims that begin their adventure in the south of Spain walk the Via de la Plata or Sanabrian Way. In its origins, the Via de la Plata was a Roman path between the cities of Mérida and Astorga and nowadays coincide with the Sanabrian Way since Zamora. The route that starts in Ourense, known because of its thermal water, makes possible to obtain the Compostela. This itinerary has 114 km and it avoids the large amount of people common in the most popular Caminos.

The first stop after leaving Ourense and walk 21 km is Cea, a famous place because of the artisanal bread they bake. Other 21 km, that pass through little villages, separate Cea from Dozón.

From this point, the pilgrims walk 17 km to Lalín, where every year a gastronomic event is celebrated. This is the Festival of the cocido (considered Festival with National Touristic Interest), a typical dish in Carnival.  The fourth day the stop is in Silleda, 15 km far away from Lalín, and the fifth the pilgrims continue 20 km to Ponte Ulla. Here it is the last break before walking 20 km and finishing in Santiago de Compostela.

This variation begins in Ponferrada, but if you want to do the last 100 km of the Camino de Santiago to obtain the Compostela it is enough to walk from Monforte the Lemos, heart of the Wine production of Ribeira Sacra.

The route of the Winter Way is specially recommended to people who like hiking and it is 138 km long. 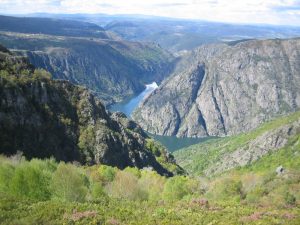 The first stage of this Camino ends in Chantada after walking 30 km. During this walk, you can enjoy the Miño river and the wonderful canyons. Chantada is a municipality with a big medieval patrimony and from here pilgrims walk 26 km to Rodeiro. In this itinerary there is an especially hard climb, the one of Faro Mountain, but the 1.181 meters high of this viewpoint worth the effort.

In contrast, the third day of walking finishes in Lalín (22 km) and it is quite easy. Here, the pilgrims join the ones that are doing the Via de la Plata and after they will all pass Silleda and Ponte Ulla before arriving to Santiago de Compostela.

These are the eight possible routes that any pilgrim can take if he or she wants to get the Compostela accreditation. You can choose one of these routes, if time is a problem. In short: eight options to enjoy the last 100 km of the Camino de Santiago in one week.

Don’t hesitate to contact us to ask more information. Galiwonders offers you the chance to plan a trip especially made for you.