The Camino de Santiago is, without a doubt, a source of inspiration. Many create art or write books about their experiences on the Camino. But, have you ever thought of taking the Camino home? Suh Myung-suk, the creator of the Jeju Olle route, walked the Camino de Santiago in 2006. She liked it so much that she decided to create a similar route in her own country, South Korea. This is the story of the Jeju Olle route.

Where is the Jeju Olle route? 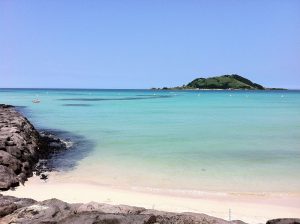 The Jeju Olle route is comprised of a series of trails that explore the island of Jeju, a tropical paradise and one of the favorite destinations for South Korean newlyweds. And it is no wonder that people love it so much, Jeju is a volcanic island with a very distinct culture and beautiful landscapes.

Jeju not only has an unique culture, different from that of the Korean peninsula, but it also has its own language, a Koreanic language which differs greatly from the dialects of the mainland. From the Jeju language comes the word olle, which designates a narrow path.

The route goes across forests, beaches, mountains and villages, through a volcanic landscape full of greenery. The idea of its creators was to change the landscape as little as possible, so the Jeju Olle Trail follows old, naturally created paths. These trails were connected by volunteers to create the Olle route, but trying to keep the land unharmed.

Koreans lead very busy lifestyles, so the route offers an escape from urban life: Suh Myung-suk wanted her countrymen to experience the benefits of slowing down and enjoying nature up close. Also, hiking is a hobby that a lot of Koreans enjoy, whether at home or abroad: last year, more than 5,100 pilgrims from South Korea walked the Camino de Santiago! 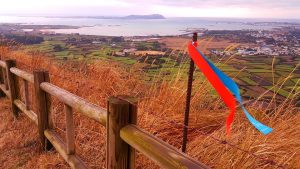 Whilst Jeju island measures only 250km all around, the Jeju Olle Trail reaches the total length of 425km, as it explores every corner of the island. So how can hikers follow the path? Well, the routes’ creators and volunteers have marked the paths in several ways.

Like in the Camino de Santiago, there are several signposts along the way to orient yourself on the Jeju Olle route. Instead of Santiago’s traditional yellow arrows, in Jeju you will find blue and orange ones. Beside the arrows, there are other types of signposts. To avoid intruding nature, the route is marked with blue and orange ribbon ties. Additionally, Ganse horse dolls also serve to show the way and to point out tourist attractions, and they are also a representative souvenir of the route! 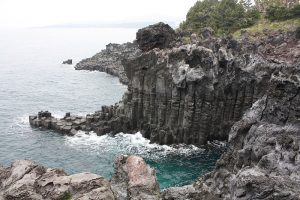 Thinking of walking the Camino de Santiago, the Finisterre Way or any of our other Galicia tours? Do not hesitate to contact us! We will be glad to help make your walking experience an unforgettable one!