When a pilgrim does the Camino de Santiago is also looking for a recognition that demonstrates what he did. It exists an official document that proves that the walker has done more than 100 km on foot or 200 km by bike. How is possible to get the Compostela certificate?

The origin of the Compostela certificate

The beginning of the Camino de Santiago as we know it, started in the 9th and 10th centuries.

At this time it was necessary to demonstrate that people were walking following their faith. With this, the pilgrims could obtain badges with the symbol of the scallop shell once they arrived to the city where the St James Apostle is.

Nevertheless, a lot of people started to create a business on this. Therefore, they decided to start selling this symbol at the entrance of Santiago, even if the Pope had forbidden this practice.

In the first years of the 13th century, the pilgrims started to receive the cartas probatorias (evidentiary letters), more difficult to counterfeit. This letter is the origin of the Compostela certificate. Nowadays, this official document can be obtained at the Oficina de Acogida del Peregrino (Pilgrim’s reception office) in Santiago. 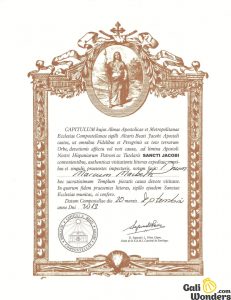 Why is the Compostela so important?

The Hostal dos Reis Católicos, placed in the Praza do Obradoiro, was founded in the 16th century as the Foundation of the Royal Hospital by the Spanish king and queen.

By this time, the pilgrims that arrived to Santiago and presented the Compostela could be hosted there, for free, during three days. This condition allowed the Royal Hospital to become the most important of Galicia, as there were a lot of pilgrims. In 1954, this building was converted in a luxury hotel.

Currently, those pilgrims who arrive to the Hostel with the Compostela or a copy can have a meal for free.

Year by year, the tourism became more popular. The Church started to be afraid that the real motivation of the pilgrims to do the Camino de Santiago was not the faith. So, it decided to establish some rules for pilgrims in order to get the Compostela accreditation.

What are the requirements to get the Compostela certificate?

-Making the Camino de Santiago for faith or other spiritual reasons

-Walking the last 100 km on foot or horseback or cycling 200 km by bike, until reach the Cathedral. Except for people with disabilities, it is not allowed any other way to arrive to Santiago, if the purpose is to get the Compostela.

-Stamping the Credencial del Camino at least twice a day during the last 100 km on foot or riding a horse. There are pilgrims that do the pilgrimage in different stages. In this case, they have to prove that they did it in a chronological and geographical order. To demonstrate this, they have to put a stamp when they finish one journey and put another stamp from the same place when they start the next one, it doesn’t matter the time between.

Where should I start the Camino in order to receive the Compostela?

Each pilgrim chooses his or her own route and, in fact, there are a big number of places where it is possible to start this adventure.

Nevertheless, the most popular starting point to get the Compostela is Sarria. This route of the French Way is a bit longer than 100 km and the walkers usually do in five days. In case they choose to go by bike, they should start from Ponferrada so they would complete 200 kms. 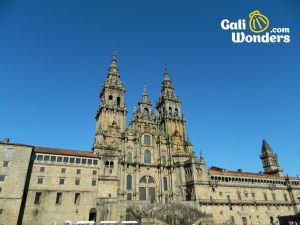 Tui, where it is possible to visit a beautiful cathedral, is one of the stops of the Portuguese Way. The 115 km between Santiago and Tui make this, an attractive starting point  and get the Compostela certificate. However, Póvoa do Varzim, in the north of Portugal, will be the beginning of the adventure for those who prefer riding the bike.

A lot of European pilgrims came to Galicia by boat following the English Way. Nowadays, it is possible to start walking from Ferrol and continue through historical places like Betanzos until Santiago, where to get the Compostela accreditation.

The Sanabrés Way or Via de la Plata goes though the inland of Galicia. In fact, Ourense is the starting point to those pilgrims who want to obtain the certificate after one week walking, while A Gudiña is where the bikers should initiate riding their bikes.

The Primitive Way , that starts in Lugo has a bit more than 100 km and can be done in five days, three of those go together with the French Way. Also in the province of Lugo, there is another camino (Northern Way) that allows pilgrims to get the Compostela accreditation, from Vilalba.

Only the adults can get the Compostela certificate?

No, also kids can get this accreditation, but in their case it is compulsory to have received the Communion and accomplish the requirements for adults (km, the stamps and do it for religious reasons). Furthermore, this document can be obtained by those who don’t have the Communion but understand the spiritual or religious nature of the Camino. If the children cannot get it because they don’t fulfill these criteria, they receive a special document with their names. In addition, the names of babies or the kids too small are included in the Compostela of the adult they go with.

What is the Certificate of Distance?

This document, together with the Compostela certificate, is the only one given by the Cathedral and it proves the number of kilometres done without having into consideration the starting point. The Certificate of Distance contains the day and the place where the pilgrimage started, the kilometres, the route and the arrival day. For those pilgrims that did it, it is possible to ask the document via email. 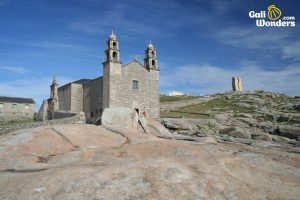 Ultreia! The greeting among pilgrims that encourages them to continue the way it is also good for those who don’t want to finish their path next to the tomb of Santiago Apostle. For that reason, many pilgrims continue walking or riding the bike to reach what the romans called “end of the world”: Fisterra. Once the 89 km of distance between Santiago and Fisterra are done, the pilgrims can receive the Fisterrana, a similar document to the Compostela certificate.

In addition, the pilgrims have another option in A Costa da Morte: Muxía. It is possible to go there directly from Santiago completing the 87 kilometres of distance or combine it with the way to Fisterra and do 118 km. The reward? Enjoy the landscape of this area and get the Muxiana, an accreditation that is possible to obtain at the Tourism Office (Oficina de Turismo) in Muxía.

Another certificate similar to the Compostela is the Pedronía. This document can be obtained in Padrón, where the legend says that the Apostle Santiago’s body arrived. To get this accreditation, it is needed to complete the 18 kilometres from Santiago or any other point of Arousa estuary following the maritime-fluvial route to Padrón.

The Traslatio received its name from the route the body of Apóstol Santiago did until reaching the Galician coast. The Government of Padrón and the Fundación Xacobea give the certificate Traslatio Xacobea to those people that follow the maritime-fluvial way from the port of San Vicente do Mar or from Ribeira to Padrón.

If you are interested in one of these routes, please do not hesitate to contact us. At Galiwonders, we are happy to help you living the best experience along the Camino de Santiago!