Recently, in our Camino de Santiago Test, we asked you about the Codex Calixtinus. If that was one of the questions you got wrong, do not worry, because today we are going to tell you all about this famous book! As you may already know, the Codex Calixtinus is kept in the Catedral de Santiago. Did you know it mysteriously disappeared a few years ago? 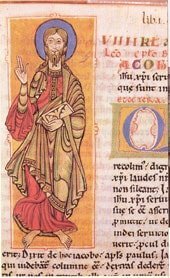 What is the Codex Calixtinus?

The Codex Calixtinus is a 12th century illuminated manuscript written in Latin, that was elaborated between 1160 and 1180. In Spanish and Galician, its name is Códice Calixtino. Its name comes from the belief that its author was Pope Callixtus II. In it, you will find sermons, stories, songs, and advice for pilgrims. The pilgrimage to Santiago de Compostela unites the whole piece, which also includes descriptions of the peoples and the lands of the Camino. The book is of great importance for historians and other scholars, not only because of its value as an art piece, but also because of its content.

What is inside the Codex?

Five smaller books comprise the Codex Calixtinus. Many believe all of these books are older than the Codex. Therefore, the Codex is a sort of Camino de Santiago Encyclopedia, that unites all the available knowledge on the Camino across several fields.

Here is an overview of each of the books:

The music of the Codex

Several sections of the Codex Calixtinus include musical compositions. Nowadays, these pieces are quite important to music experts, since they contain early examples of polyphony.

The story of its theft

The story of the Codex’s theft drew a lot of attention in local and international press, and it remained a mystery until a year later, when the police found the book.

Our story begins in early July 2011, when the Cathedral’s archivists found out that the Codex Calixtinus was missing. At first, they thought the book may have been misplaced, and searched all over for it. They soon realized that the book was nowhere to be found, so they decided to involve the police. Thus started an investigation to find the culprit, made even more urgent because of the interest of the press and the general public. 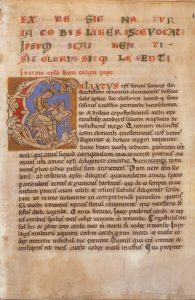 After considering several suspects, the police finally set their sight on a retired electrician who had worked at the temple. As they later found out, the man wanted to get revenge on the Cathedral’s dean. The electrician wanted to be hired as a permanent worker in the Cathedral instead of a freelancer, but he was fired. Both men had been close for years, and the electrician thought his friend the dean would help him get his job back. As he didn’t, the man decided to take revenge on his old friend. The Codex Calixtinus was the dean’s most precious treasure. He had devoted many hours to study the book. So, what could hurt him more?

A year after the disappearance, the police found the Codex inside a plastic bag in the culprit’s garage. He was sentenced to 10 years of prison. But there are still many mysteries in this story: Did the maintenance man act on his own? Or was he, as he once declared, conspiring with the dean and another Church big-fish to steal the book and make it famous in the international press?

The Codex Calixtinus after the theft

We may never know what is truth and what rumor in this story, but the book certainly became more popular. After the theft, the sales of the book’s translations and facsimiles shot up, and there was also a popular exhibition on the book. Since last year, the Codex Calixtinus is part of UNESCO’s World Heritage list. 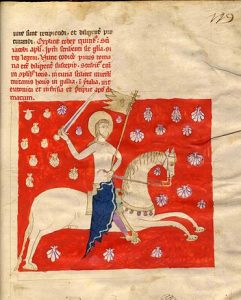 Were you familiar with the Codex Calixtinus and its history? Last week we talked about Catedral de Santiago mishaps, so take a look at out post if you are interested!

At Galiwonders, we work to make your Camino de Santiago comfortable and convenient, so that you do not have to worry about any of the details. If you want to walk to Santiago de Compostela or discover all that the Galicia region has to offer, do not hesitate to contact us!