In Galicia, Christmas continues until the 6th of January

Those pilgrims who are walking the Camino at the moment… keep reading! In this post you will get to know all the Christmas traditions of Galicia.

From the Christmas Eve until the Kings’ Night, in Galicia Christmas is celebrated during two merry weeks, when families enjoy together the start of a new year.

The 31st of December is celebrated with a big family dinner (like Christmas Eve). At midnight, the bell rings twelve times and it’s time to eat twelve grapes (one per stroke). It is the moment to make a wish for the next year. But this wish will only be fulfilled if all the grapes are eaten.

In Santiago de Compostela, the bell rings at the Cathedral. People stay in front of it, at the Obradoiro Square, to eat the grapes. Then, the party starts until the morning.

The 1st of January, families usually organize a new family meal (like the one in Christmas) to celebrate the first day of the year.

In other countries, Christmas time finishes the 1st of January. But in Spain, the celebrations continue until the 6th of January.

In Spain, the figure of the Three Wise Men (los Reyes Magos in Spanish) is considered an important Christian tradition. It is common to see the Three Kings in all the nativity scenes. 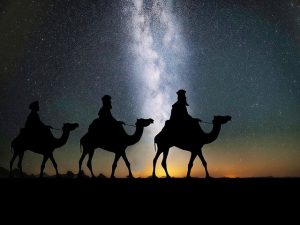 History of the Three Wise Men

The origin of Three Kings takes place in the New Testament. Melchor, Gaspar and Baltasar (the names of the Kings) travelled for days to give three presents to Christ Child. It was dark at night when they arrived, bringing with them gold, frankincense and myrrh. The Wise Men were from different places. Guided by a star (the star of Belen), they arrived to Belen.

The Three Wise Men Parade is celebrated in Spain since 1885 (the 5th and the 6th of January).

The letter to the Wise Men

Christmas is one of the most exciting moments of the year for kids. They usually get a lot of presents and all the house is decorated. Everyone is happy!

After Santa Claus visit (Apalpador in Galicia), kids can only think about the presents that the Three Wise Men will bring to them (only if they had a good behaviour during the year!).

Every year, they need to write a letter to the Three Kings, so they know which presents they want. After the Parade, they can to meet the Kings and give them the letter in person. If their behaviour was not good enough, instead of presents they can get coal! 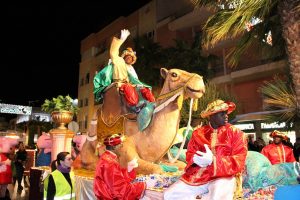 On the 5th of January, the Kings arrive in all the cities and villages of Spain, and they come with their entourage: the pajes reales (the royal pages). Melchor, Gaspar and Baltasar throw sweets from their carriages.

The Wise Men Parade is a great show of joy, full of lights and colors. The Kings walk in their floats while people sing Christmas carols. Children show the biggest smile of the year in their faces!

After the Wise Men Parade, children fall asleep very early. Melchor, Gaspar and Baltasar have to enter through the window and leave the presents next to the Christmas tree.

But the Kings are very tired after such a long trip, so children have to leave milk and water for them.

In Christmas, adults also enjoy the magic of this period. They receive a lot of presents of their friends and their family.

If you still don’t have a present for all family members or friends, we propose you to book a Camino de Santiago Tour for them.

The Camino de Santiago is a rewarding experience, a gift that they will never forget!