Which route of the Camino de Santiago should I choose? Well, the answer to this question always depends on the strength, time and motivations of each pilgrim. But we always recommend to do some research before deciding. There are more alternatives beyond the French Way, and the Northern Way (or Camino del Norte in Spanish) is one of them.

This route, mainly coastal, is distinguished by the views of the ocean, the cliffs, the fishing villages, the beaches, and the delicious gastronomy. Let’s learn a bit more about the different northern regions on route.

Where is the Northern Way? 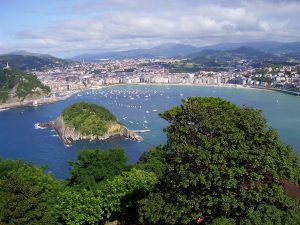 The Northern Way pass through four autonomous communities of Spain: the Basque Country, Cantabria, Asturias and Galicia. Each one of these regions is worth a visit.

The Basque Country has experienced a cultural and touristic resurgence over the past years. Bilbao, for example, has become a symbol of modern architecture and a pilgrimage point for those who appreciate art and culture. San Sebastian is a very popular tourist destination, really well known because of its gastronomy.

International pilgrims may be surprised to see that all public signs are written both in Spanish and Euskera (or Basque language). This is a unique language, with no connections to any other.

The first stages of the Northern Camino pass through small finishing towns, linked to great seafarers like Juan Sebastián Elcano (he was responsible for the first circumnavigation of the glove).

Even if the Basque Country is very popular as an industrial region of Spain, the countryside is still very traditional. Besides the Ocean views, pilgrims will be able to enjoy a rural landscapes, with extensive farms.

Cantabria is the next autonomous community crossed by the Camino del Norte. This region, like the Basque Country, has also experiences a great growth over 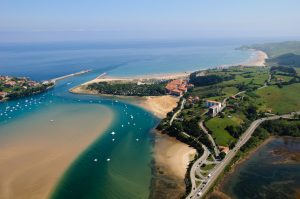 There is a strong influence of the “indianos” in the architecture of the region. “Indianos” is the word used to describe those emigrants who came back home in Spain, after making a lot of money in South America.

Some of the most popular towns in Cantabria are Santander (the capital of the region), San Vicente de la Barquera, Laredo and Castro Urdiales.

The region is also very popular as an ecotourism destination: the Picos de Europa (“Peaks of Europe”), is an ecological jewel. Because of its fauna and flora, and its amazing landscapes.

Asturias is the last region before reaching Galicia, final part of the Northern Way. It is also a distinctive ecological setting, as the region shares the Picos the Europa with Cantabria. In fact the first stage of the Camino walk in Asturias, recall Cantabria: a flat path against the coastline.

This region represents the best example of all the Northern part of Spain, known as “Green Spain”. This is because of the presence of forests, countryside and natural areas.

Once in Villaviciosa, the Camino splits: the Camino Primitive (or Original Way) continues on the left, and the Northern Way, on the right. Two different routes leading to the same destination: Santiago de Compostela.

And finally Galicia. All different Caminos end up in this region, since it is where Santiago de Compostela is located.

As in the Basque Country, there is a local language, the Galego (all public signs are displayed in both languages). This region is also part of the area known as “Green Spain”, because of the strong presence of this color on the landscape.

Galicia has Celtic and Roman origins. It was on the 9th century, when the remains of the Apostle where discovered, that the region became very popular in Europe. This discovery transformed Santiago de Compostela into a pilgrimage point.

After a period of decadence, the Camino de Santiago and Galicia itself have also experience a rebirth over the past few decades. The walking conditions for pilgrims in the region, are excellent: all paths are really well marked, there are many facilities along the way, the landscape still preserves the rural atmosphere, etc.

Galicia is a rainy region, which could bother some walkers. But the rain is the origin of its green color, and its unforgettable landscapes.

Have you walked any section of the Norther Way? Which was your favorite region of Northern Spain? Please do not hesitate to contact us if you have any questions about the Camino de Santiago.