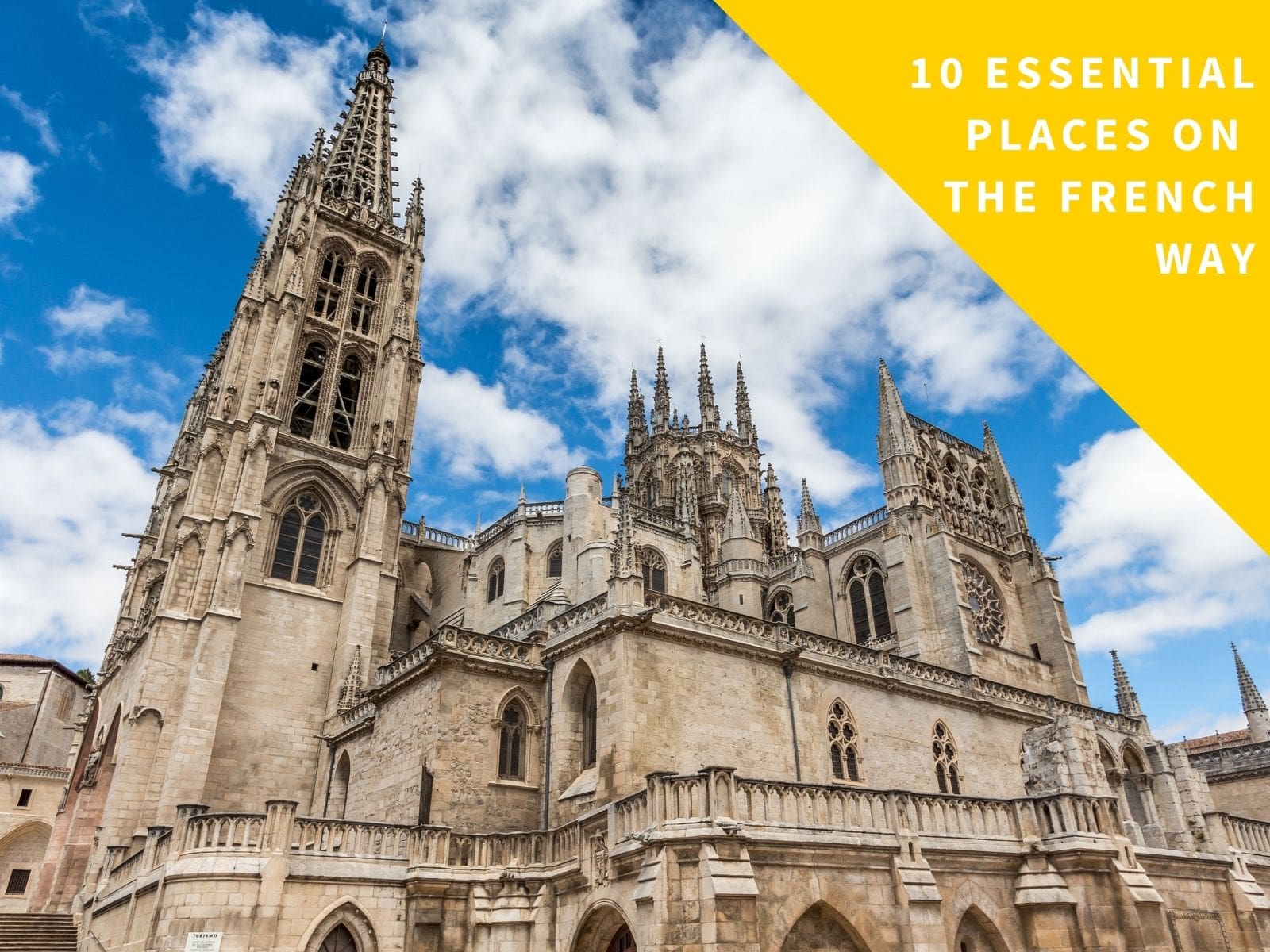 Today we will talk about some of the most interesting places along the more than 800 km of the most popular and social itinerary of all the Camino de Santiago routes, the French Way. Discover in this post what are the 10 essential places on the French Way.

10 Essential places to visit on the French Way

The Way of St James (or Camino de Santiago) has played a very important role throughout history in the cultural exchange between Spain and other European regions, specially during the Middle Ages. Although there are many different pilgrimage routes going to Santiago de Compostela, the French Way is the most traditional and well known internationally. The starting point of this itinerary of 780 km, is the French village of St Jean de Pied de Port. In fact, 189,937 pilgrims (or 54.65% of the total), walked this route in 2019, according to statistics from the Pilgrim’s Office of Santiago.

The French Way connects Southern France with Santiago de Compostela; the route passes through very important places, both in terms of culture and landscape, such as Roman bridges, monasteries, cathedrals always surrounded by a green colored background. There are countless attractions on the Camino, and we strongly recommend to those Pilgrims with a bit of time, to stop and enjoy some of these wonders, especially in these next two years during the Holy Year.

Today we have prepared this list for you, with some of the jewels of the French Way. 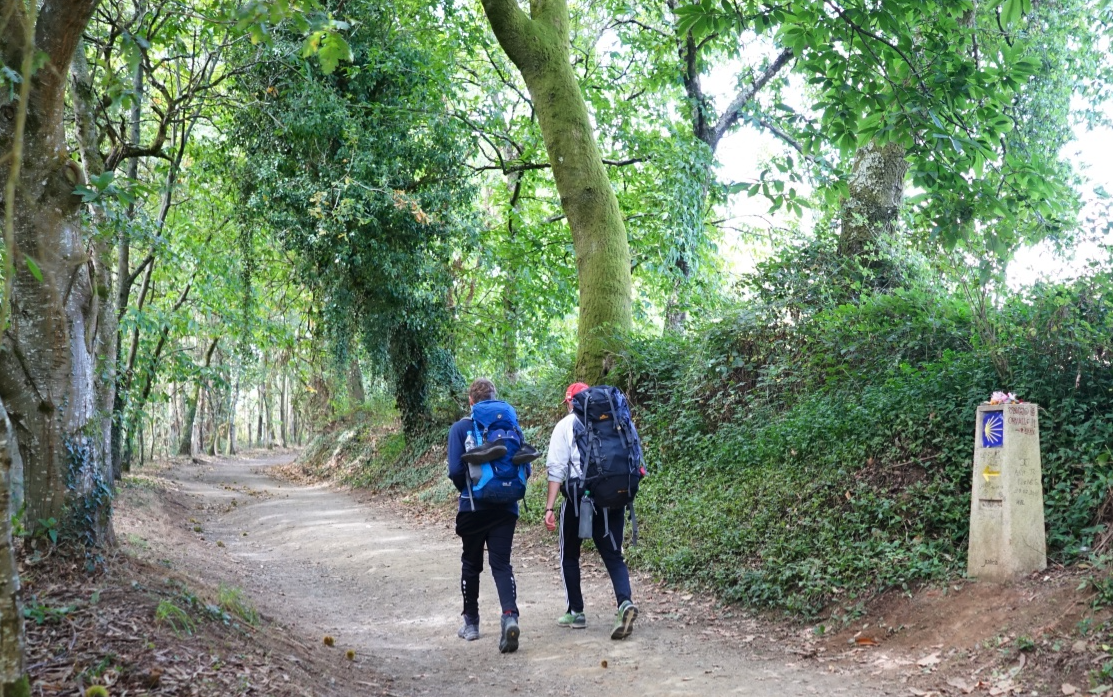 This Gothic temple was built on the XIII century, by order of the King Sancho VII the Strong. It is considered to be the best Gothic building in Navarra region. Inside, you will be able to contemplate the sculpture of Our Lady of Roncesvalles, that was elaborated in Toulouse on the XIV century.

The church also has a defensive tower built in the 14th century, on the left side of the facade. Thousands of pilgrims choose this enclave of the Camino de Santiago as the starting point of their Jacobean Route (more than 4,000 pilgrims started here in 2019). The collegiate church, which underwent many reconstruction works over the centuries, is today witness to the recovery of this millennial pilgrimage and the great success of the Camino Francés. 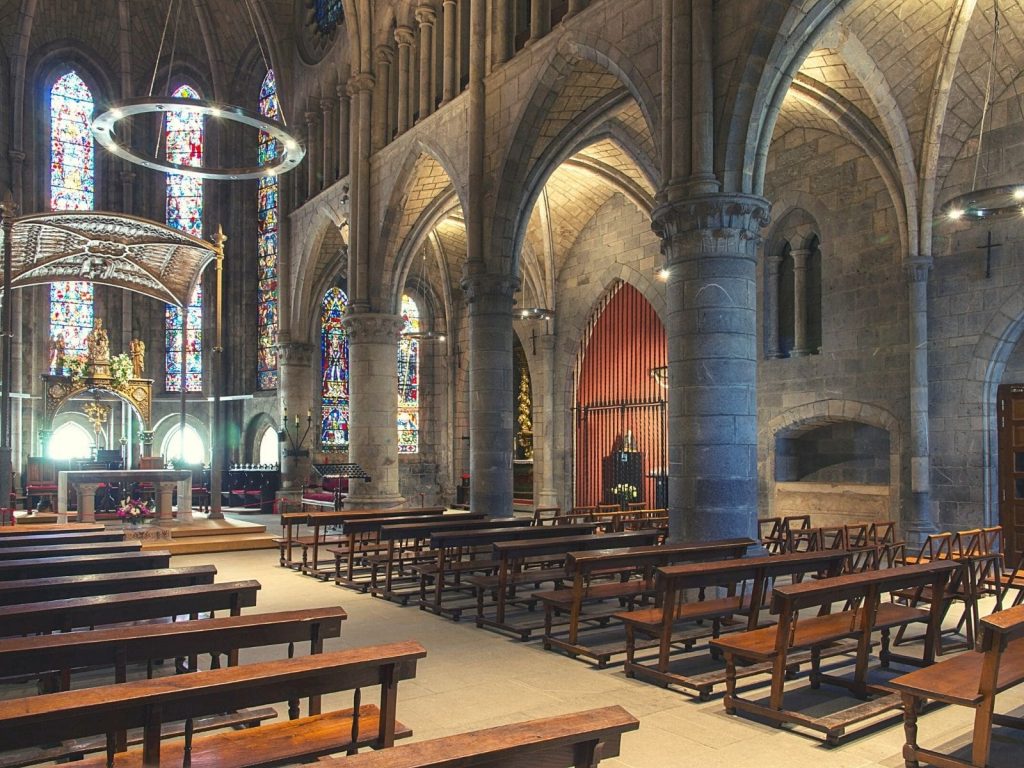 This Romanesque bridge has six semicircular arches and five pillars, and it is one of the nicest and most iconic constructions of the whole Camino. It is located in Puente de la Reina, where the French Way and the Aragonés Way join together. The name of this town (Puente de la Reina means Queen´s Bridge) finds its origin on the XI century, when the wife of the King Sancho García’s II ordered to built it, in order to help Pilgrims to cross the bridge.

The Puente de la Reina gives its name to this town, capital of the valley of Ilzarbe in the Middle Zone of Navarra.

In the past, the bridge had 3 defensive towers, two at its ends and another central one, where the image of the Virgin of Puy or Txori was located. Today you cannot find this Renaissance image on the bridge, because it was moved to the church of San Pedro in 1843. 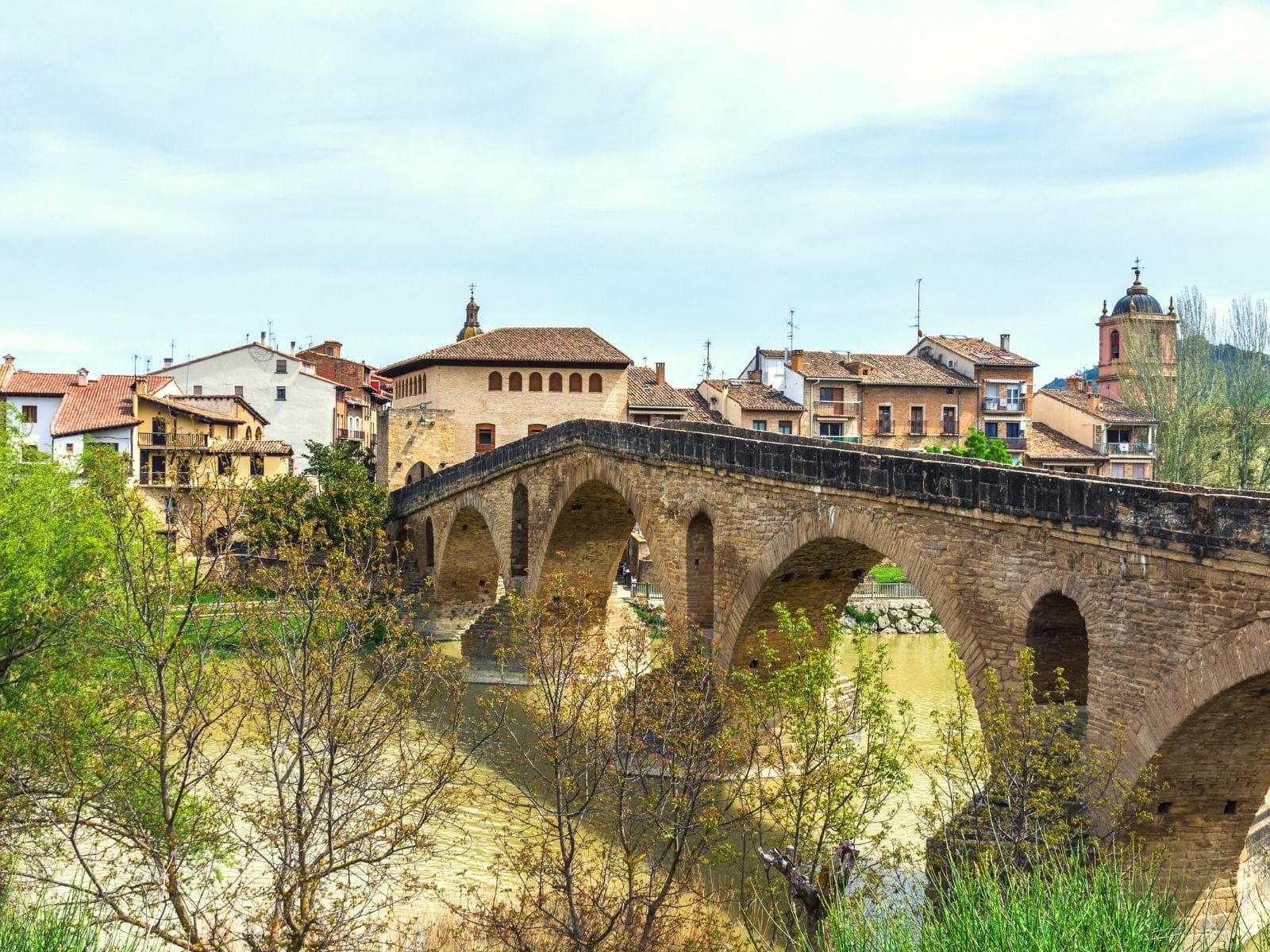 These monasteries were declared a World Heritage Site in 1997 after almost 1,500 years of monastic life in these places. Not only because of their architectural beauty, but also because it is considered to be the place where Spanish language was born (the first manuscript in Spanish was found there). You will need to walk about 15 extra km, but it is really worth visiting. We remind you that they are two different monasteries so you have to organize two separate visits.

The oldest is the Monastery of Suso, whose original monastery was built in the 6th century, representing the first pilgrimage sanctuary in the region. The oldest part of this monastery is made up of caves, and in one of them, called the Oratory of San Millán, is located the tomb of the saint and the altar, considered by many to be the oldest in Spain. Gonzalo de Berceo, born around 1196 and first known Spanish poet, received here his first education. The Monastery of Yuso was built during the 16th and 17th centuries and its sacristy is one of the most beautiful in Spain. The 18th century ceiling frescoes maintain the great beauty of their original colors. A visit not to be missed on your French route! 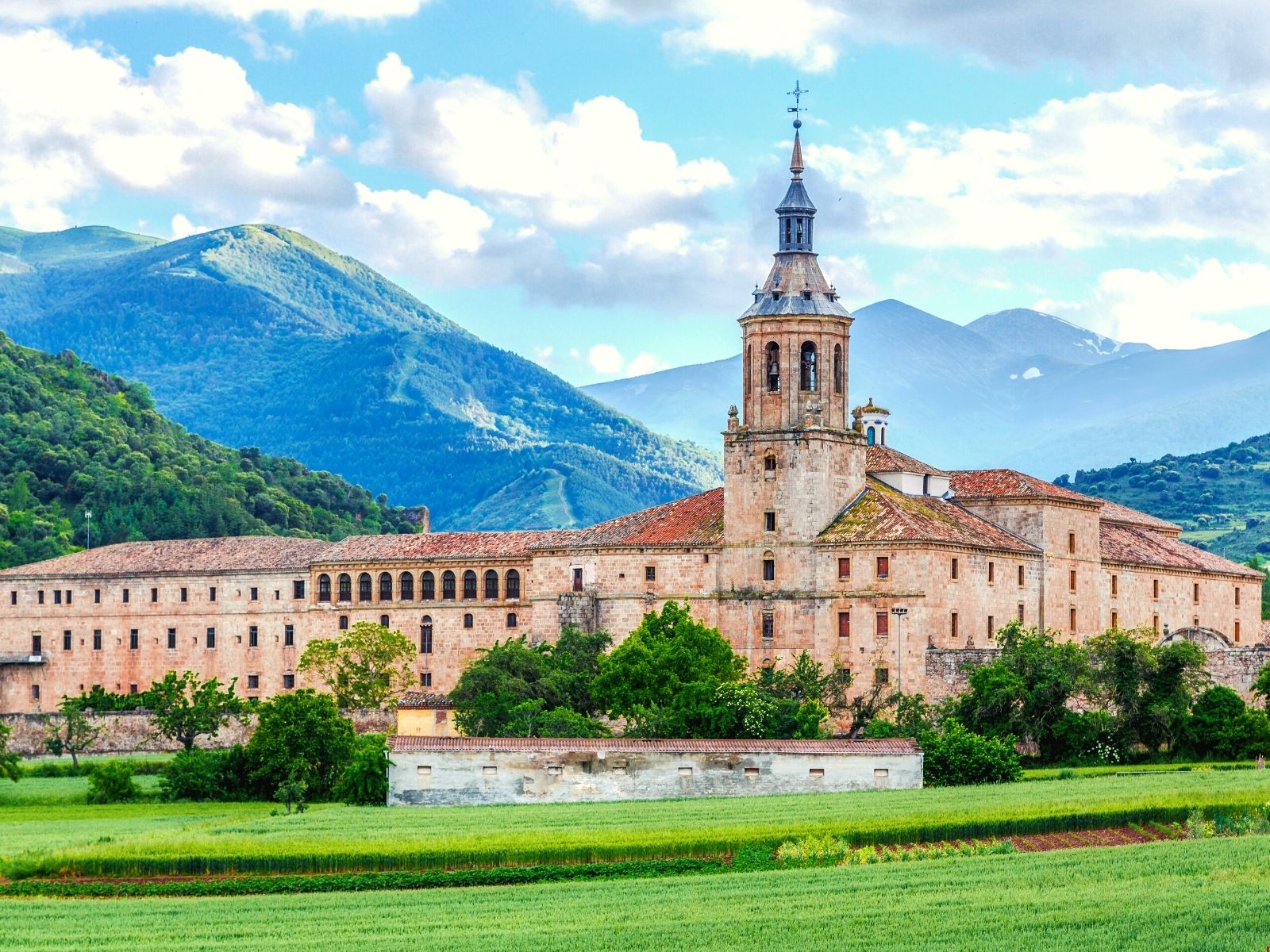 This Benedictine monastery was built on the VII century. Many historical events took place there, like the Muslim invasion, but it is still in perfect condition. During the 12th and 13th centuries, which represented the golden age of pilgrimages, Silos was considered one of the most important centers after Santiago. Its cloister is a representative sample of Romanesque art in Spain. This incredible double floor cloister forms a quadrilateral with slightly unequal sides. The lower floor is the oldest and of greatest merit as it consists of a spectacular collection of 64 capitals representing different themes. In addition, it saw up to 6 masters involved in its creation, although only two of them stood out.

It also has a museum, where you will be able to see the holy chalice used by Santo Domingo de Silos, and the tympanum of the door, that was the origin of the whole Monastery. Pilgrims can also visit its exceptional library, which has nearly 180,000 volumes. This place undoubtedly has something special since thousands of pilgrims consider Silos an obligatory stop in their route. 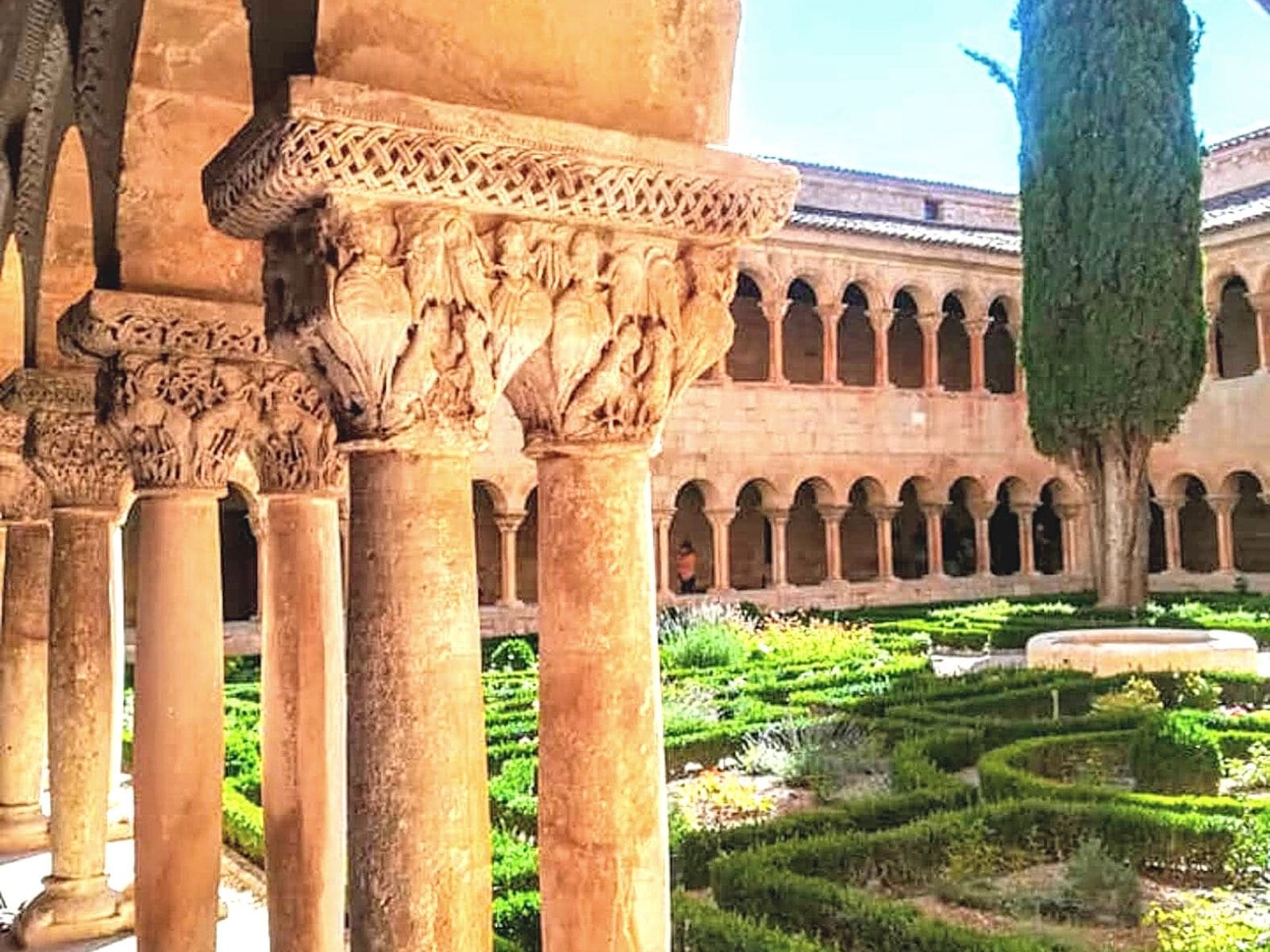 Fossil remains and evidence of the presence of five different hominid species have been found in the Archaeological Site of Atapuerca, the oldest dating back 1,300,000 years.

This is undoubtedly a unique enclave for archaeological study since the findings made in this place had a great impact on the knowledge of human evolution. More than 300 specialists from 22 different nationalities constitute the Atapuerca Research Team (EIA). This extraordinary site represents a true jewel of international research, don’t miss it! 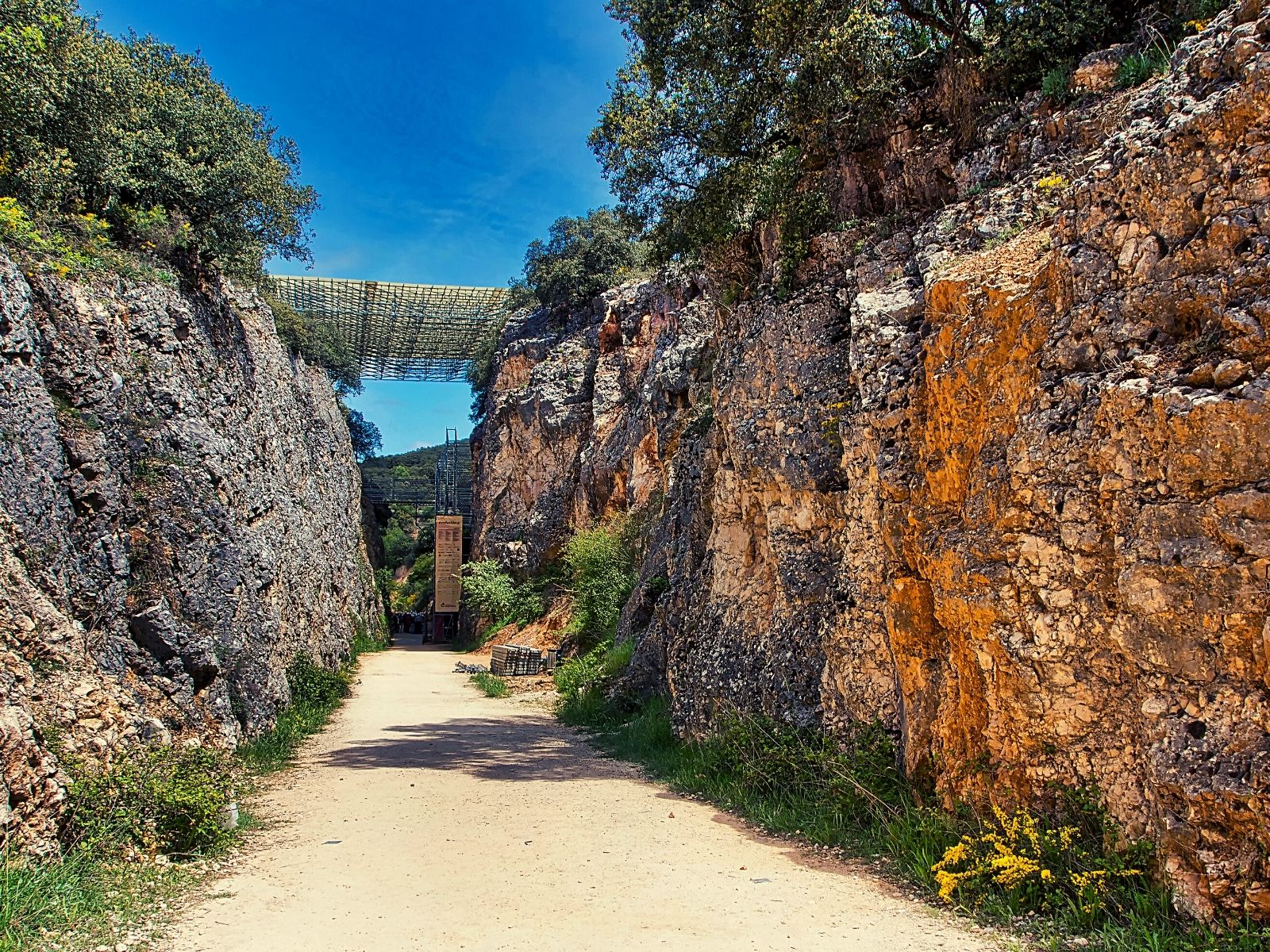 Burgos Cathedral is a World Heritage Site and Nacional Monument. This is one of the most popular buildings of Spain. Its construction started in 1221, and nowadays it is one of the most representative buildings of the French Gothic in Spain. Previously, there was another Romanesque cathedral on the same site, built between 1080 and 1095. Inside, we can find work of art made by great artists, such as Gil de Siloé.

From the Plaza de Santa Maria you can contemplate the majestic main facade, inspired by the Cathedrals of Paris and Reims. Over the centuries, it underwent major renovations (in the XY-XVII centuries) that continued until the twentieth century, making the Cathedral the European monument that has received more funds for its restoration (with a total investment of 30 million euros). 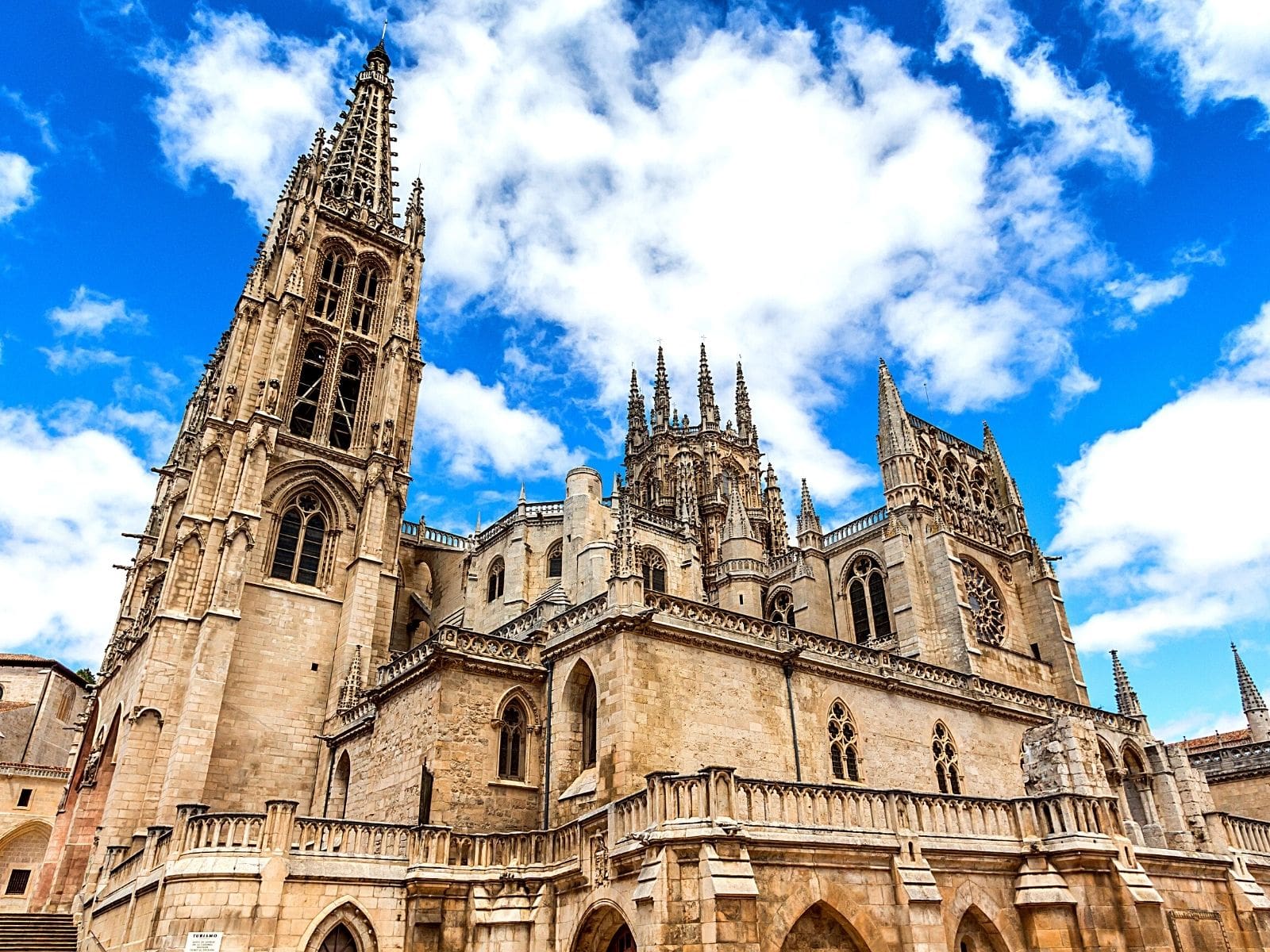 It is also known as the Santa Marí­a de la Regla Cathedral; this impressive building was built on the XII century, and its stained glass windows are really well known (some of them are still preserved from its origins). It has 134 large windows and 3 rose windows, one of the largest collections of medieval stained glasses in the world.

This imposing cathedral, originally place of Roman baths, today represents one of the finest examples of the French-influenced Gothic style. The ground plan of this church is almost an identical copy of the Cathedral of Reims. A curiosity about this cathedral: the main facade has two Gothic towers that, although it may not seem at first glance, are not identical (they have two different heights of 65 and 68 meters). 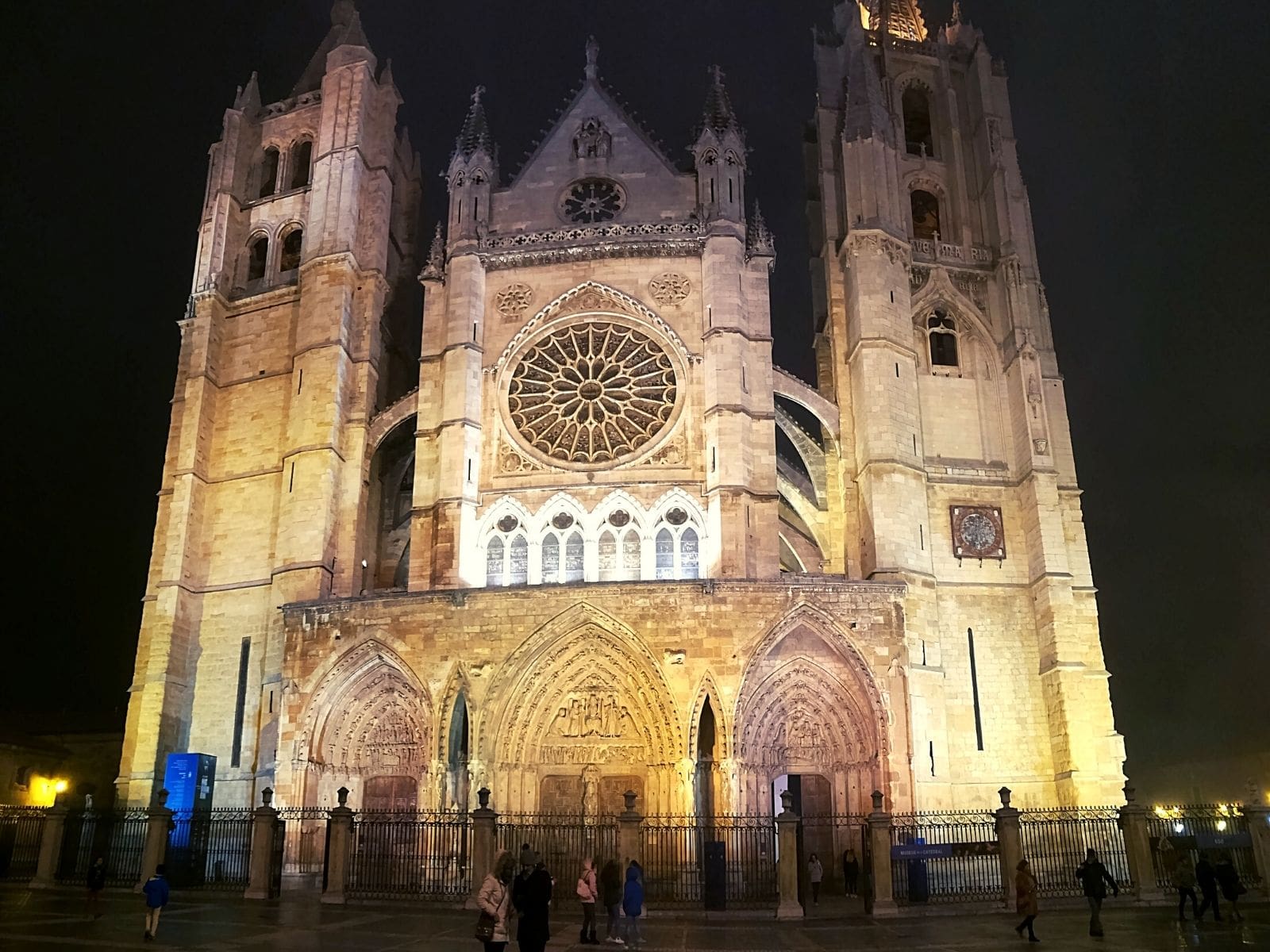 This Palace was built by Antoni Gaudi between 1989 and 1915 using grey granite from El Bierzo region, following a neo-gothic style. The Catalan architect was chosen by his great friend, the bishop of Astorga, Joan Baptista Grau i Vallespinós. He did commission him this project to to be his residence after the previous one was destroyed by a fire in 1886. The Cathedral of Astorga is just beside it, another place you must visit if you are doing the French Way.

The Episcopal Palace of Astorga, which in 1969 was catalogued as an Asset of Cultural Interest, leaves visitors speechless and since 1962 houses a museum dedicated to the Camino de Santiago, the Museum of the Ways. Gaudí was in charge of 65% of the construction but did not finish the project (Ricardo García Guereta did it between 1907 and 1915 following Gaudí’s layout). Gaudí’s interpretation of Gothic-medieval art was always free and personal. Around the Palace there are beautiful gardens, with 3 statues representing angels. 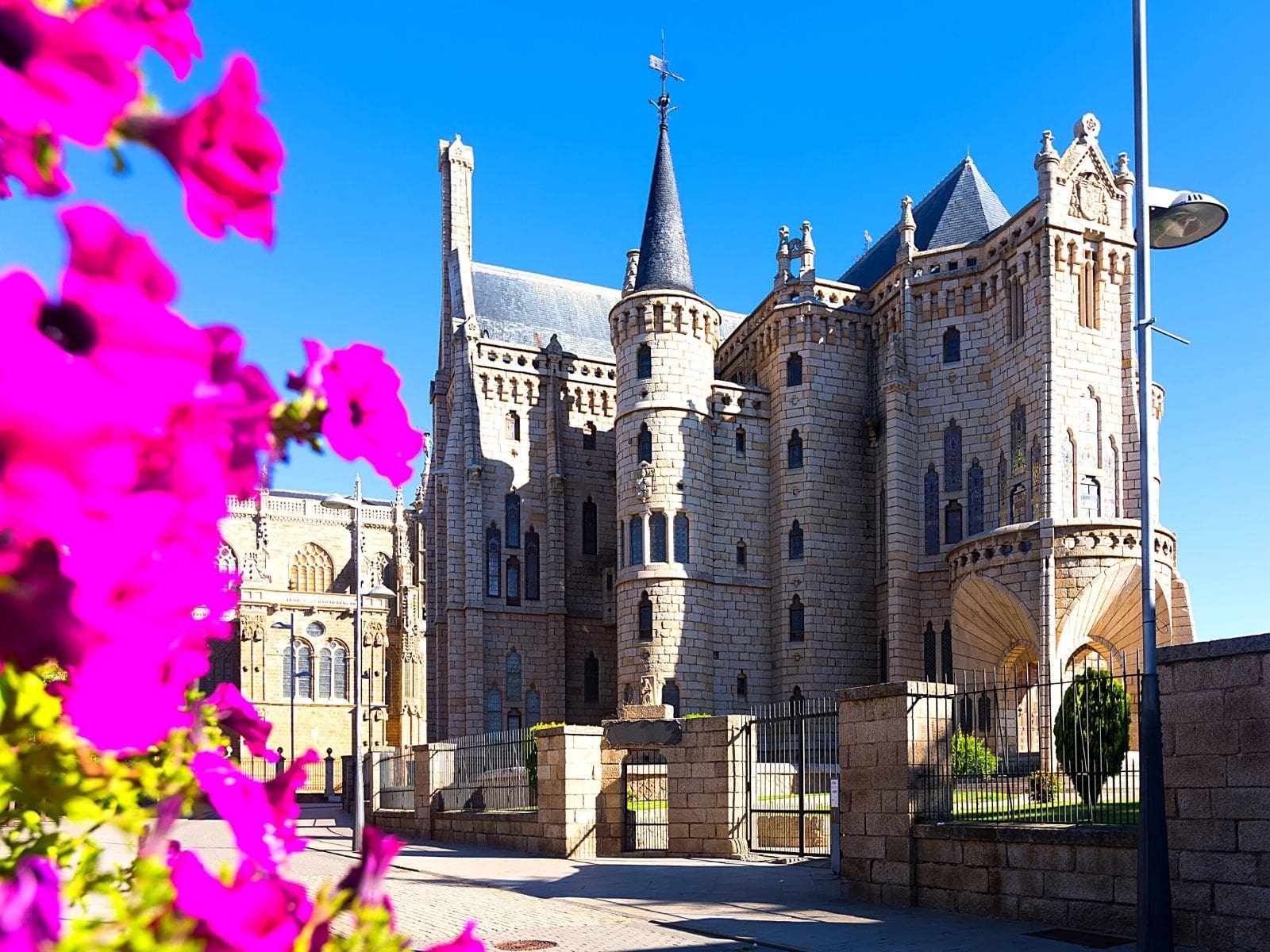 This Monastery from the VI century is located in the province of Lugo. This is the oldest inhabited monastery in Spain and one of the most important ones in Spain, due to its various styles: pre-Romanesque, Gothic, Renaissance, baroque and neoclassical. This is because it experienced many different restorations throughout the years after the medieval wars and conflicts that affected the monastery on numerous occasions..

The monastery has two cloisters of different dimensions. The Big Cloister, built between 1685 and 1689, which is the largest in Spain as it has 3,000m² and the Small Cloister which was built between 1539 and 1582. The complex also has a library, with more than 25,000 volumes, and a chapel dedicated to San Salvador. 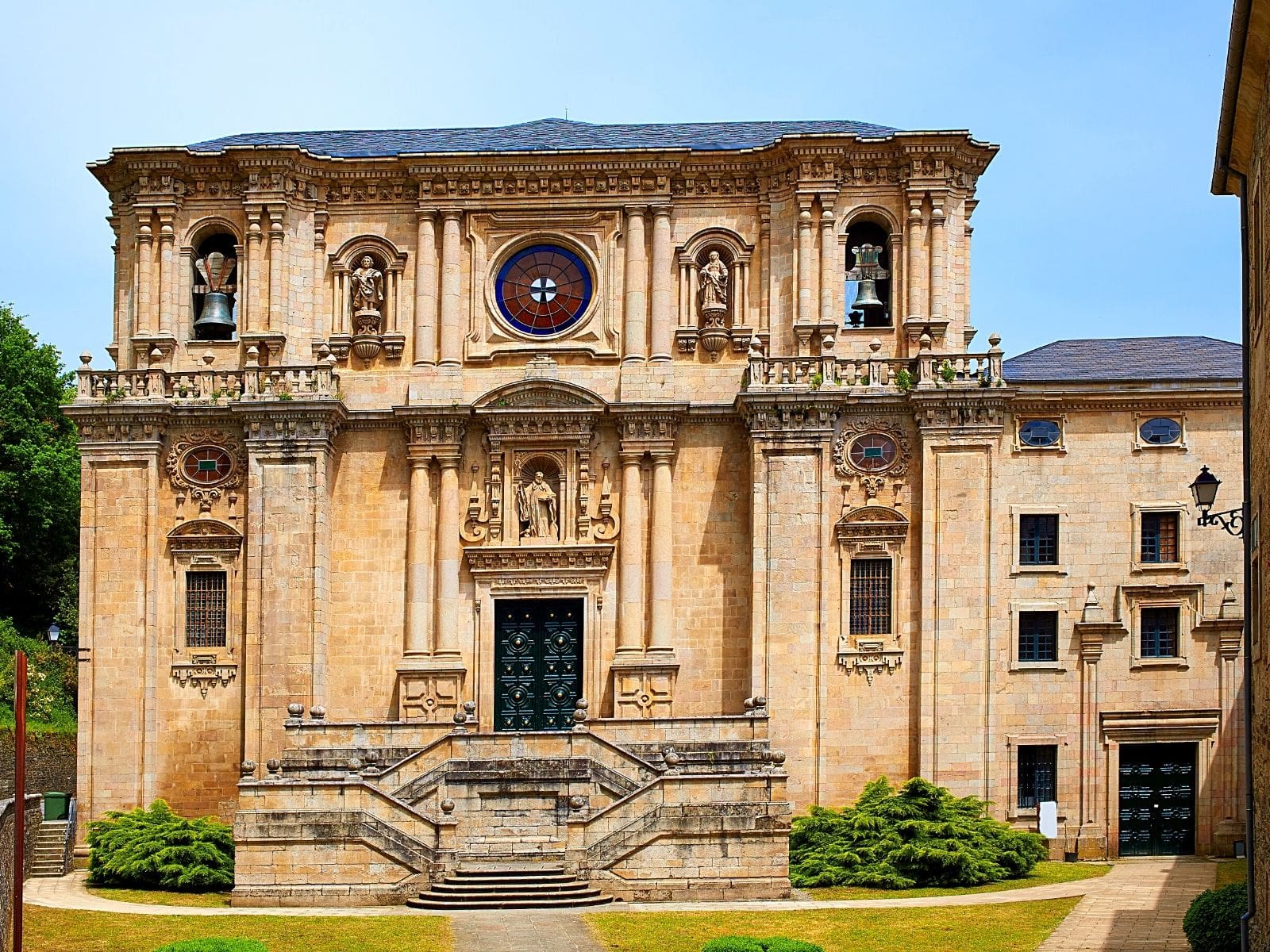 We don´t need to say that the most iconic jewel of the whole French Way is the Santiago Cathedral itself, the final destination of all Pilgrims. According to the tradition, the remains of Saint James the Apostle were found in 813, on the same place where the Cathedral was built. An authentic work of art, outside but also inside especially after the incredible restoration works that finished just before the Opening of the Holy Door and the beginning of the Xacobean Holy Year.

Arriving at the end of the Camino, you can admire the majestic facade of the Plaza del Obradoiro, in baroque style and built in the eighteenth century. Its main mission was to protect the Portico de la Gloria. The Cathedral of Santiago is one of the most famous and beautiful of all the Iberian territory and certainly its interior will leave you speechless. Here, in addition, you can see the imposing censer called botafumeiro, which weighs about 100 when full. 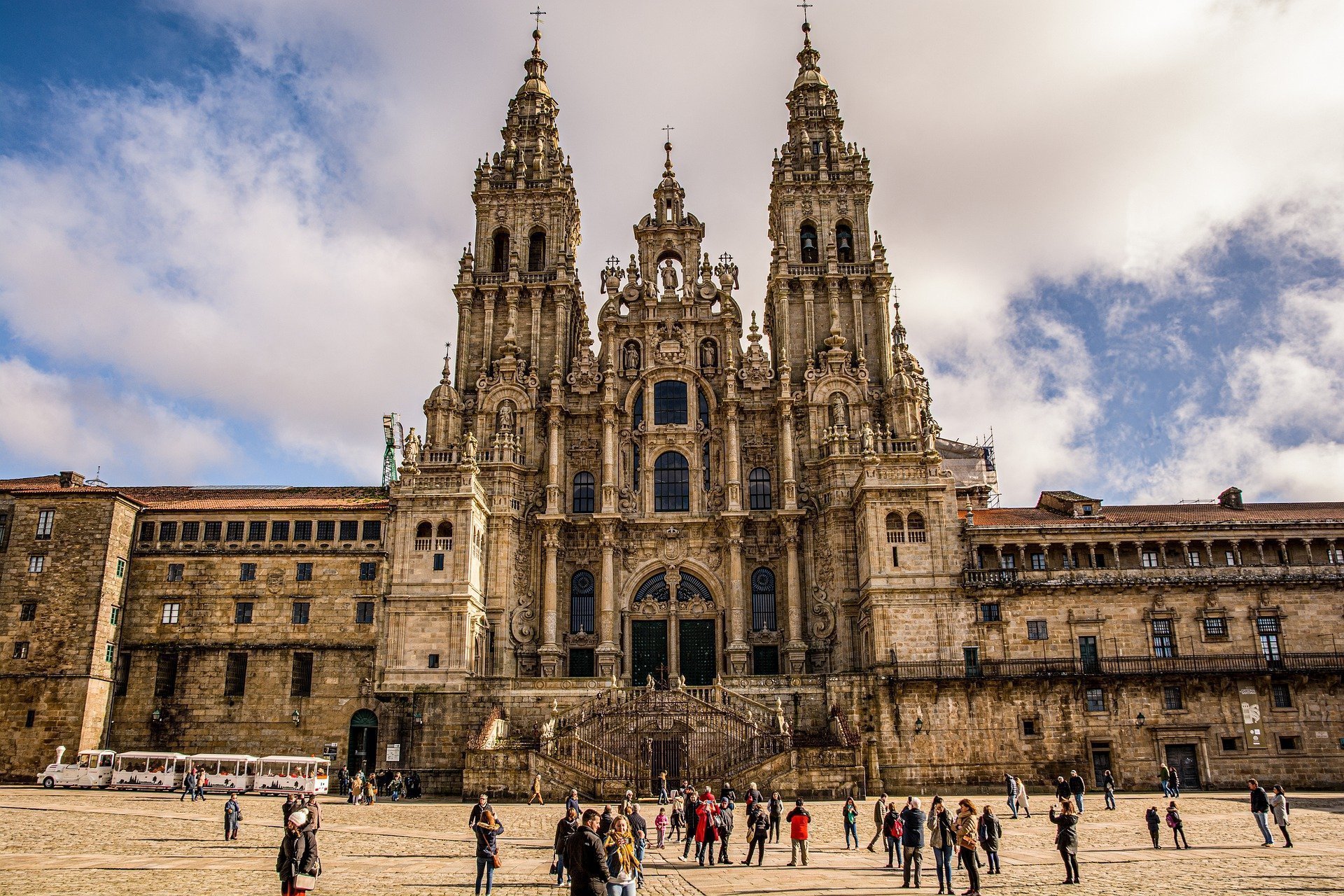 For more information about the French Way or any route ofthe Camino de Santiago, please do not hesitate to contact us. At Galiwonders we will be happy to help you create your tailor-made itinerary.